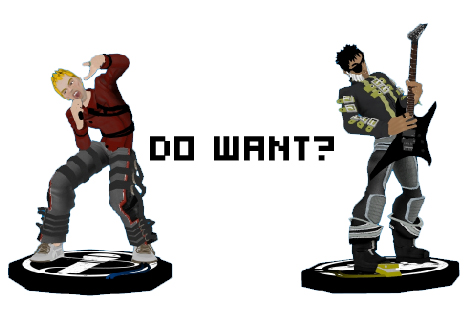 One of the features that was talked about a little bit back when the first Rock Band came out was the ability to design your own band merch and even have figurines of your customized characters made. The Rock Band Web site has been updated now to allow just that.

Syncing up with your gamertag, it gathers the information on all of your characters and bands and allows you to make a wide range of the stuff actual bands sell at shows. T-shirts, posters, bumper stickers, keychains and buttons are all available, emblazoned with your character and/or band logo.

I took a moment to fiddle around with the generator and it’s really easy to use regardless of what you’re trying to make. Just select the character or band, pose them and submit your choices. You’ll get a preview of what the final product will look like and be given the option to purchase it. The photo above are members of my band, Shubby and The Thousand Young (left to right: Howard Phillips and Escarcho) designed as figurines.

Pricing ranges from $2-$5 for the smaller stuff, while posters will run you $14 and a t-shirt $29. The figurines, which measure 6″ and are not poseable (beyond what the site’s utility for designing them allows), are $69.

Does this sort of merchandising interest you? $29 is a little steep for a t-shirt, in my opinion, but the keychains and buttons could be neat tchotchkes to have. There’s a press release with more details after the jump.

Design and Order Bandmates™—Personalized Figurines that  resemble Your In-Game Characters!

“The products we will be offering through the Rock Band store go far
beyond standard videogame fare and encourage Rock Band players to live in the real world of rock,” says Ryan Lesser, art director at Harmonix. “Just like with real bands, Rock Band bands need their own schwag too, so we’re giving Rock Band musicians a chance to order personalized t-shirts, posters, bumper stickers and more that are sure to keep any fan happy.”

The new Photo Creator, designed by Harmonix, makes it easy to create images of your RockBand 2 characters and bands; just simply pose your characters, add backdrops and visual effects, shoot the photos and assign the game-quality 3D images to your band pages and personal profile on RockBand.com. In addition, MTV Games and Harmonix have partnered with Zazzle(R), a company that specializes in on-demand customizable printing for apparel and accessories, to offer players the opportunity to use images captured with the Photo Creator tool and upload them using the Merch Booth tool onto a variety of T-shirts, posters,stickers and more!

MTV Games and Harmonix have also partnered with Z Corporation(R), a company that specializes in 3D printing and manufacturing, to offer collectible Bandmates™—detailed 6″ figurines automatically generated from players’ personalized in-game avatars. Using the Bandmate Creator tool, designed by Harmonix, players cancustomize their character’s pose before ordering the figurine. Pricing for individual Bandmates is $69; a great value at nearly half the price of other made-to-order figurines available on the market.

**Shippingand handling not included in prices above

TheRockBand.com store will also offer a large selection of band gear and clothing that features original art from Rock Band’s surreal shell
design; merchandise that is only worthy of a touring Rock Band musician.

Released on September 14, 2008 for the Xbox(R)360 video game and entertainment system from Microsoft, Rock Band 2 has revolutionized music gaming with the ability to export most of the songs from the original Rock Band disc [1], Online World Tour, daily Battle-Of-The Band Tournaments, Auto-Calibration to eliminate TV lag, wireless drums, quieter, velocity sensitive drum heads, support for up to three cymbals (sold separately), No Fail Mode, and a real Drum Trainer.

Rock Band 2 features the largest music catalogue of any music-based videogame to date including over 100 songs [2] on the Rock Band 2 soundtrack with an unrivaled blend of classic and new artists including AC/DC, Guns ‘N Roses, Bob Dylan, Pearl Jam, Motorhead and more! With the addition of complete and immediate backwards compatibility for songs purchased from Rock Band’s ever-expanding online music store and the ability to export most songs from the original Rock Band disc, the Rock Band music library will feature more than 500 songs [3] by year’s end. RockBand 2 is rated “T” for Teen with descriptors of lyrics and suggestive themes by the ESRB.

Rock Band2 is nowavailable on the Xbox 360(R) video game and entertainment system from Microsoft with an exclusive launch window in North America.  Rock Band 2 willbe available for other platforms later this year.

About MTV Games
MTV Games is dedicated to creating, marketing and publishing high-quality, innovative interactive products that are relevant to the MTV audience and complement the core values of the MTV Networks brands.

About Harmonix MusicSystems, Inc
Harmonix Music Systems,Inc., based inCambridge, MA, and established in 1995, is the leading developer of groundbreaking music-oriented videogames. Harmonix was founded by Alex Rigopulos and Eran Egozy, who formed the company to invent new ways for non-musicians to experience the unique joy that comes from making music and have pioneered music and rhythm gaming in the US. For more information please visit:
www.harmonixmusic.com

About Zazzle
Infinite and Instant, Zazzle is the only, on-demand retail platform for consumers and major brands, offering billions of retail quality, one-of-a-kind products shipped within 24 hours. Offering the largest library of customizable digital imagesfrom world-class brands, Zazzle enables content owners to unlock their entire libraries of content, making it available for purchase and customization by consumers. Through Zazzle’s innovative on-demand retail and technology platform, users can instantly create, customize to fit their personal style,purchase and sell a near infinite array of products online. The company launched in 2005 and is based in RedwoodCity,California. For more information, [https://www.zazzle.com/] www.Zazzle.com.

[1] Online connection and title update download required. Owners of the original Rock Band will be able to export 55 of the 58 tracks from the original Rock Band disc for play in Rock Band 2. The following Rock Band disc tracks will not be available for export into Rock Band2: * “Paranoid” as made famous by Black Sabbath, * “Run to the Hills”as made famous by Iron Maiden, and “Enter Sandman” by Metallica. (* Indicates a cover song, all other songs are original master recordings.)