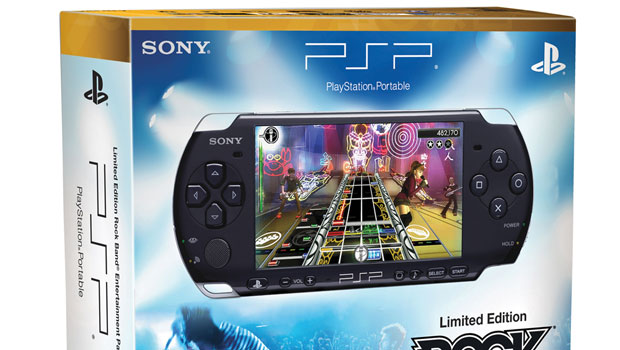 Available on June 9, The title will retail for $39.99. It will also be available in one of those fancy PSP “Entertainment Packs” for $199.99 and includes: Rock Band Unplugged, a voucher code to download the film School of Rock, a 4GB Memory Stick PRO Duo, and a “Piano Black” PSP.

As expected, the game won’t utilize any peripherals, since carrying a little plastic USB guitar around with you would be idiotic and cumbersome. Instead, Harmonix (in a partnership with developer Backbone) is going back to “beat match” gameplay in what is said to be similar to their earlier titles Frequency and Amplitude. The disc will feature 40 master-recordings, and will also support an in-game music store for future downloads.

Among the 40 tracks will be nine songs exclusive to Rock Band Unplugged for a “limited time” before becoming available for download on other consoles. Those songs are:

There’s a trailer after the jump, and yes, it looks as if Rock Band had a baby with Amplitude. And no, that’s not necessarily a bad thing. Also, if I were to have already played the game, I’d probably put a hands-preview up of it next week. Keep your eyes peeled for more details.

“ROCK BAND UNPLUGGED” FOR THE PSP® (PlayStation®Portable) SYSTEM: THE AWARD-WINNING MUSIC VIDEO GAME IS GOING ON THE ROAD ON JUNE 9, 2009

Cambridge, Mass. – April 8, 2009 – Harmonix, the world’s leading developer of music-based games, MTV Games, a part of Viacom’s MTV Networks (NYSE: VIA, VIA.B), and distribution partner Electronic Arts Inc. (NASDAQ: ERTS) announced plans today to release Rock Band Unplugged for the PSP® (PlayStation®Portable) system. Rock Band Unplugged, developed by Harmonix in partnership with Backbone Entertainment, a Foundation 9 Entertainment studio, and based on the award-winning Rock Band series of games, will launch simultaneously in both North America and Europe June 9, 2009. The game will launch exclusively on the PSP system with software retailing for $39.99 in North America.

“Rock Band Unplugged reinvents band gameplay while staying true to the authentic feel of the Rock Band console games,” said Bob Picunko, Senior Vice President of Electronic Games for MTV Games. “Harmonix delivers innovation with every game they develop and we are excited to continue our long-list of industry firsts with the Rock Band in-gamewireless music store on the PSP system.”

Rock Band Unplugged creates a full band experience in the palm of your hand by combining traditional beat match gameplay with key elements from both Rock Band and Rock Band 2, such as overdrive and chords.  Your hands are the “peripherals” in Rock Band Unplugged allowing you to take direct control of the lead/bass guitars, drums and vocals. In addition, players can expect a rich Rock Band experience with fully functional modes like World Tour, Band Survival and Warm Up and a robust character creator for full customization!

Rock Band Unplugged will feature over 40 master-recordings including nine brand new, exclusive songs for the PSP system for a limited time! Plus, Rock Band Unplugged will include the first fully-featured in-game store for downloadable content on the PSP system in the North American and European markets, leveraging the PSP system’s wireless capabilities. The in-game store will be powered by PlayStation®Network, and players will be able to use their existing PlayStation Network account to purchase tracks, similar to the Rock Band console experience. PSP system owners will also have the option of purchasing tracks via PlayStation®Store on the PC.

The following tracks will launch exclusively through Rock Band Unplugged on the PSP system for a limited time before becoming downloadable content for the other platforms:

To commemorate the debut of the Rock Band franchise on the PSP system, Sony Computer Entertainment America plans to release a limited edition Rock Band branded PSP Entertainment Pack at the launch of Rock Band Unplugged. The bundle will include the game, a voucher to download Paramount Pictures’ School of Rock from PlayStation®Store, a 4GB Memory Stick PRO Duo™, and a “Piano Black” PSP system. The Rock Band Entertainment Pack will be available in North America for $199.99 (MSRP).

Rock Band is the ultimate platform for music fans and gamers to interact with music like never before. The game challenges players to put together a band and tour for fame and fortune – all while learning to master lead/bass guitar, drums and vocals. Featuring the most master recordings of any music game ever by the world’s biggest rock artists, Rock Band includes tracks that span every genre of rock ranging from alternative and classic rock, to heavy metal and punk.