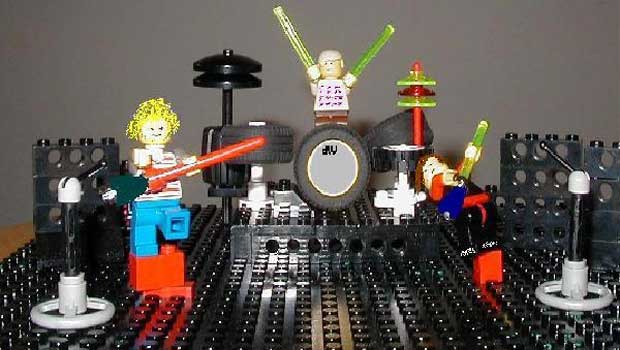 With the Rock Band franchise already successful on multiple consoles and finally making its way to the PlayStation Portable this June, where’s the love for Nintendo’s handheld?

In an interview with Edge (via GoNintendo), Harmonix’s VP of product development Greg LoPiccolo says they’re not ruling out a version of the series for the Nintendo DS.

“We are looking carefeully at the DS,” he tells Edge, “and certainly aren’t ruling out developing for it in the future. However, for right now, our focus is on Rock Band Unplugged as a PSP title.”

Rumors of a LEGO Rock Band title have recently gained steam after “leaked” early slides from a GDC presentation indicated its existence. If our sources are to be believed, UK-based Traveler’s Tales is indeed working closely with Harmonix on a LEGO Rock Band for — you guessed it — the Nintendo DS. Unlike Activision’s Guitar Hero: On Tour, we’re told the game doesn’t use a peripheral, instead using the stylus for beat-matching along the lines of Amplitude.

Harmonix, MTV Games, Electronic Arts, and Traveler’s Tales are collectively being publicly quiet on the matter, so this still remains in rumor territory. For now. But while marrying the Rock Band and LEGO franchises doesn’t seem to make much sense on the surface, if it does happen, the Nintendo DS does does like the perfect fit.