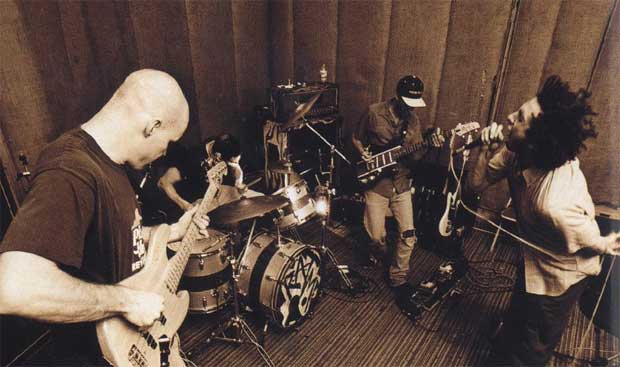 Harmonix and MTV Games have announced today that it will be releasing a standalone Rock Band Metal Track pack this October. Your neighbors are not amused.

The disc will feature 20 tracks, including six tracks previously unavailable on the Rock Band Music Store:  Blue Öyster Cult’ “Transmaniacon MC”; Hawkwind’s “Master of the Universe”; I Mother Earth’s “Levitate”; Motörhead’s “Killed by Death”; Nazareth’s “Hair of the Dog”; and Rage Against The Machine’s “Bulls on Parade.” Seems like the “metal” label is a bit broad here, as this one’s a bit all over the place, if you ask me. (Note: No one actually asked me.)

All this for $29.99. PlayStation 3 and Xbox 360 owners rejoice — you can dump these tracks to your hard drive for use in Rock Band or Rock Band 2, as you could with the other track packs. Wii Rock Band 2 owners, well… I don’t know what to tell you. You can store your DLC on SD Cards now?

If this Metal Track Pack sounds familiar, it’s because it was leaked way back in June by way of Xbox 360 achievements. But the full track list is now available for your perusal, and it can be found after the jump.

Songs exclusive to the track pack for a limited time only appear in bold, because an asterisk just isn’t enough. Also, dibs on Mr. Dibs when playing the Hawkwind track:

All That Remains – “Two Weeks”
At the Gates – “Blinded By Fear”
Black Tide – “ShockWave”
Blue Öyster Cult – “Transmaniacon MC”*
Bullet For My Valentine – “Waking the Demon”
Children of Bodom – “Are You Dead Yet”
Evile – “Thrasher”
Godsmack – “I Stand Alone”
The Haunted – “D.O.A.”
Hawkwind – “Master Of The Universe”*
I Mother Earth – “Levitate”*
In This Moment – “Forever”
Judas Priest – “Screaming for Vengeance”
Lacuna Coil – “Closer”
Lamb of God – “Laid to Rest”
Motörhead – “Killed by Death”*
Nazareth – “Hair of the Dog”*
Queens of the Stone Age – “3’s & 7’s”
Rage Against The Machine – “Bulls On Parade”*
Yngwie Malmsteen – “Red Devil”