So, it’s no surprise that Rock Band as a solo venture is an entirely different experience. It’s either for the highly competitive who are chasing gold stars and full combos, or for those who are strongly enticed by connecting with the music. The social component is obviously gone, and that’s a deal-breaker for some.

However, Rock Band VR might help mitigate that. After playing it at a GDC Oculus event, I think it might be the best way to play Rock Band alone. Or, it’s at least the most innovative.

Rock Band VR puts you on-stage as a performer. With the help of the Oculus touch controls, the guitar becomes part of your body. You are one with your axe. In the game with the headset on, you see what a musician sees. Your drummer and some amps are behind you. Your bassist is to the side, sometimes eager to dance over to you. It’s so dark that only the first couple rows of people can be seen, but the exit lights shine brightly from the back of the venue.

Most of this stuff can be interacted with too. The pedalboard at your feet can mess with the guitar’s tone. The mic stand in front of you is for singing, if you’re so inclined (but it goes un-scored). There’s even an opportunity to trigger some pyrotechnics, but I, unfortunately, didn’t notice it.

It’s all set dressing for a more authentic rocker experience. The actual Rock Band takes place in your on-stage monitors, which you’ll need to look slightly down to see. This is cause for a sort of disconnect because it’s tough to admire the surroundings while looking into a monitor. It’s almost like just looking at another television screen through the headset you’re already wearing. It’s not optimal, but it works. 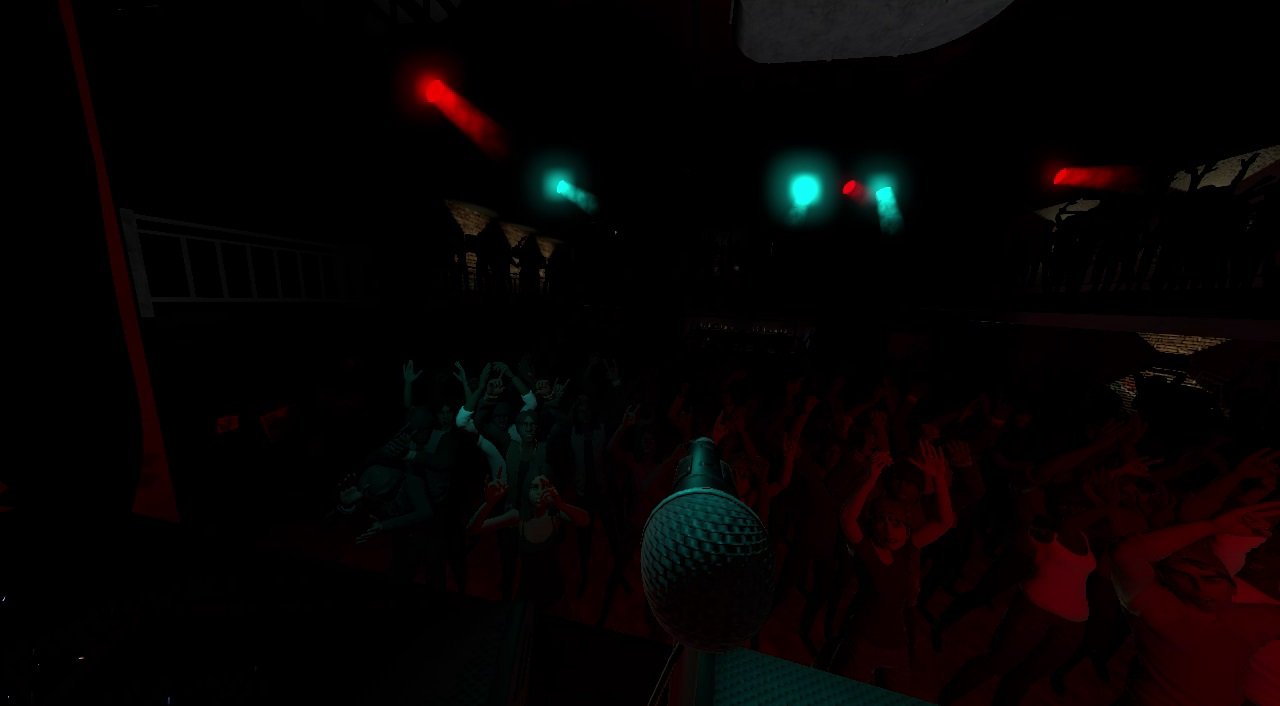 Don’t count on that being the only option in the final release, though. Harmonix has acknowledged that the whole monitor thing isn’t great, and that it’s figuring out a way to keep the player more engaged with the performance aspect. The developer assured me that it’s aiming to have a more smoothed-out version of the demo by E3. Hopefully the next one has more songs than just “Walk This Way” by Aerosmith ’cause Aerosmith kind of sucks.

That should be the case because Harmonix is working on putting together a stellar soundtrack for this. Since Rock Band VR only allows for playing of the guitar, the team can focus solely on composing a set list of songs with great guitar parts. Whether that means drawing from the existing library or adding new songs, that remains to be seen. But, the game will ship with a similar number of tracks to other Rock Band titles, somewhere in the 55-75 song range.

Also, it’s not quite clear how the main non-quickplay mode will be laid out. Harmonix could go back to the Guitar Hero style of working down an increasingly-tough list of songs. Or, it could do something more in the vein of Rock Band 4 and have the player putting together sets and playing what they want to hear.

Whatever route Harmonix goes, it should prove to be great fun. With others is obviously the best way to play Rock Band — but, if none of those are handy, popping on the Oculus Rift and playing to a few hundred people is the next best thing. They should help stave off the loneliness.