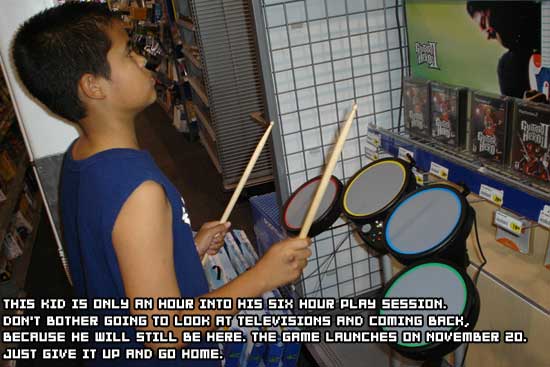 Kotaku is reporting that some Best Buy stores have already received their Rock Band demo kits.

Great timing, as Guitar Hero III is street dated for tomorrow. Sure, it’s great news that you can run to your local store and play now, but that’s not the best part. It seems that Best Buys’ internal marketing team thought it would be a good idea to set up the demo on top of the area that is home to the Guitar Hero franchise. Ouch.

The Xbox 360 demo features 15 playable songs, but the drums reportedly have no bass pedal. We’re not quite sure how that’s going to work out, but it could be damaging to sales when no one can actually complete a song.

Put on some pants, get to your local Best Buy, and let us know if you have any luck finding the demo in your stores.