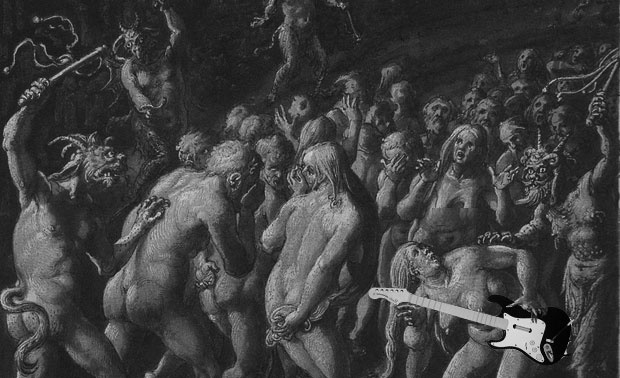 Last night I had a dream. And in this dream I was in Hell, chained to a wireless Rock Band drum kit, forced by imps to play a non-stop setlist. A set list of 666 songs. My drumsticks, the bones of a freshly-slaughtered unicorn.

I woke up in a pool of my own sweat, only to find a red envelope under my pillow. It contained the most evil (yet most metal) press release I’ve ever laid eyes on. In it, it tells of the totally brutal (and completely accidental) milestone reached by Harmonix and MTV Games — with this past week’s release of Jane’s Addiction’s Nothing’s Shocking, the Rock Band music catalog has hit 666 songs.

“That’s a hell of a lot of songs,” President and Co-Founder of Harmonix Alex Rigopulos is quoted as saying in the press release. “We owe much of the success of the Rock Band franchise to the Dark Lord. We couldn’t have done it with you, buddy!”

The Dark Lord, is of course, pleased.

“This is a great day for music fans and gamers alike,” said Lucifer, Chief Executive Officer and co-founder of Hell. “Since its inception, Rock Band has included some of the darkest and most brutal bands of all time, including Megadeth, Judas Priest, Testament and, of course, my personal favorite, The Naked Brothers Band.”

When I contacted MTV Games and Harmonix reps to verify the validity of this press document, the earpiece of my phone shocked my face. The evil press release can be found after the jump.

[UPDATE: We’re giving away a prize package with videogame goodies like t-shirts, games, and other evil stuff to the person who leaves the 666th comment. Good luck with that!]

[UPDATE 2: Dale here. Damn, 764 posts? How many “next 50 posts” clicks was that? Anyway, congrats to 666th poster Guagloves. Your perseverance or (luck paid) off. Expect to hear from us soon about what you’ve won!]

This Was Completely Coincidental, and Totally F***ing Awesome

“That’s a hell of a lot of songs,” stated Alex Rigopulos, President and Co-Founder, Harmonix. “We owe much of the success of the Rock Band franchise to the Dark Lord. We couldn’t have done it without you, buddy!”

“This is a great day for music fans and gamers alike,” said Lucifer, Chief Executive Officer and co-founder of Hell. “Since its inception, Rock Band has included some of the darkest and most brutal bands of all time, including Megadeth, Judas Priest, Testament and, of course, my personal favorite, The Naked Brothers Band. Now if they’d just get some Iron Maiden masters, I swear I’d never leave the Pit of Everlasting Torment.”

Rock Band continues to satisfy music fans’ and gamers’ hellacious appetite for rock with more than 40 million paid downloads since its launch on November 20, 2007.  The Rock Band Music Store allows players to preview and purchase downloadable individual music tracks and packs from the vast selection of offerings available to date without ever leaving the game as they build their own custom Rock Band library.

Rock Band 2 is now available nationwide and supports all previously downloaded content.  The groundbreaking music platform that forever changed the face of music video games is committed to taking gaming to the next level with the evolution of the franchise.

Rock Band and Rock Band 2 are rated “T” for Teen (lyrics, suggestive themes) by the ESRB.

MTV Games is dedicated to creating, marketing and publishing high-quality, innovative interactive products that are relevant to the MTV audience and complement the core values of the MTV Networks brands.

Harmonix Music Systems, Inc., based in Cambridge, MA, and established in 1995, is the leading developer of groundbreaking music-oriented videogames. Harmonix was founded by Alex Rigopulos and Eran Egozy, who formed the company to invent new ways for non-musicians to experience the unique joy that comes from making music and have pioneered music and rhythm gaming in the US. For more information please visit: www.harmonixmusic.com.

Hell is the world’s leading collector of damned souls and developer of innovative torment for sinners everywhere. Founded in 1967, Hell has become the go-to source for everlasting punishment, hopelessness, and things that are decidedly metal. For more information, please visit: https://en.wikipedia.org/wiki/Hell