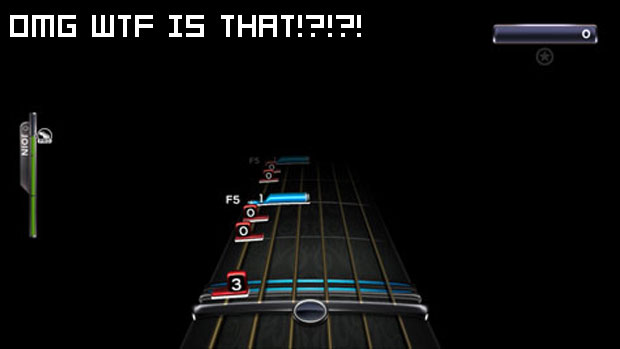 Playing a real guitar is complicated, at least more so than picking up a five-button plastic one. Teaching someone to play guitar, even more so. Doing it with a videogame using and expanding on an existing “gameplay vocabulary”? Harmonix is going to give it a shot with Rock Band 3′s “Pro Guitar” mode.

We’ve talked about it before in very broad terms, but now the game’s senior designer Sylvain Dubrofsky is breaking it down piece by piece. From the easiest difficulties to the more complicated chording and notes found on “Expert,” it seems like they’re doing a decent job of ramping up for newbies.

Picking up an instrument is an intimating thing for most folks, and at first glance, Rock Band 3‘s “Pro Guitar” mode isn’t much different. But given that Harmonix has already gotten folks comfortable holding the instrument (admittedly a smaller, plastic one) and the standard note highway, it’s an interesting and more approachable step. As a self-taught guitar player, a tool like this would have been an awesome stepping stone when I was trying to figure out where to put my fingers to play “Space Oddity” in middle school.

Rock Band 3 is out October 26; I don’t have my copy yet, but the f**ing Gossip Girl cast does.