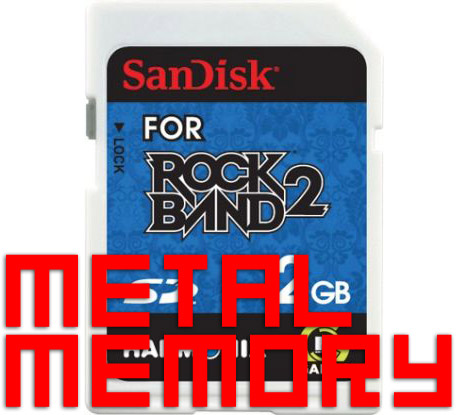 Wii wannabe rockers can pick download 50 tracks, including the 20 free bonus tracks. The remaining 30 songs are only a portion of the hundreds of tracks already available to Xbox 360 and PlayStation 3 users, but it’s a start. Yes, there are plans for the Wii music store to match that of what is available on the PS3 and Xbox 360 … it just won’t happen overnight.

Each track can be purchased individually for 200 Wii Points. There will be no discounted “track pack” bundles of multiple tracks, due mostly to how the Wii Shop allows content to be delivered. Speaking of which, your storage solution? An SD card, baby. Who’d have guessed it? For optimal performance, use SanDisk’s Rock Band 2-branded SD card, of course. It’s magical, and the only SD card that rocks.

The full list of available tracks can be found after the jump.

The 30 downloadable tracks for purchase include:

The 20 free Rock Band 2 tracks include: