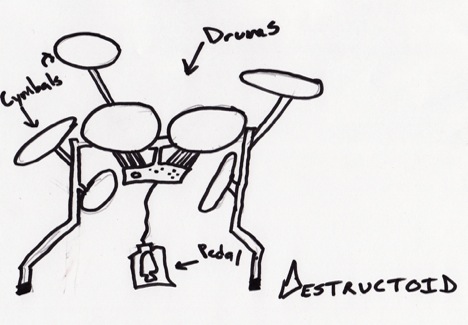 The upcoming edition of Game Informer is going to have a juicy feature on Rock Band 2. One of the more startling revelations in the feature is that two sets of drums will be offered to players. The first set looks much like the original with the standard four pads. Fortunately, this time the pads are actually cushioned, which should help all of your neighbors sleep at night. It is also sporting a reinforced kick pedal to avoid those nasty breaking incidents. Additionally, players will have the option to upgrade the standard set with an expansion pack that adds two cymbals to the piece.

Pictured above is my artist rendition of the big daddy drums that will be sold optionally with Rock Band 2. It’s called the “Ion drum kit” and has a seriously sleek black finish and decent metal detail work. This thing is rocking three cymbals, four drum pads, and a reinforced foot pedal. This best part is that the set can be utilized away from the game as a fully-featured electronic set, if you have the required stuff to do it.

Both sets of cymbals will have corresponding colors with the pads on the drum kit. Basically they will act as alternate buttons, instead of completely different inputs. Harmonix alludes to the fact that in future updates or revisions the cymbals could possibly play a larger role. Both these sets are completely optional as well. The original Rock Band drums will operate perfectly in Rock Band 2. The only difference is that you will look infinitely more hardcore behind that Ion set.

Personally, I would love to sit down and act like I could traverse a huge kit, but I know my bounds. Are any of you ready to toss down the dough that something like this would cost? I know my biggest concern with the original Rock Band was finding a place to put all the instruments in. There’s absolutely no way something this big could fit in any agreeable place in my apartment.