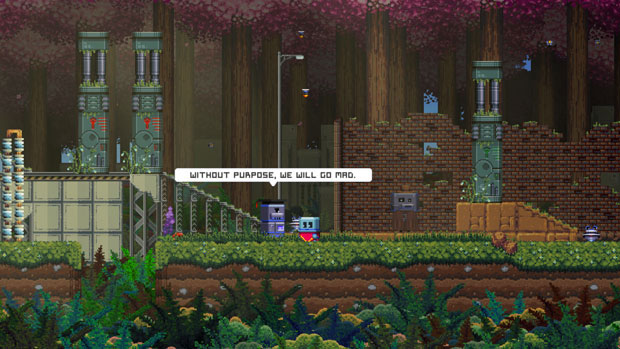 There’s a few hours left on the Kickstarter

Whenever I’ve posted an article about a videogame Kickstarter, I’ve tried to lean on the side of titles that have either a demo as that helps ease some of the potential doubts you can have while backing a project. The team behind Poncho made the decision to come to EGX so that attendees could play the game in the flesh and decide if they want to help make the full thing a reality.

Poncho is a small robot, awoken after a disaster has wiped out humanity and left just a few robots milling around. A recorded message from Poncho’s creator leads the plucky robot on a quest to restart humanity. The game itself is a 2D platformer but Poncho can navigate between three different 2D planes, allowing him to get around obstacles.

There’s some tricky jumping sequences involving platforms that moved between the three different planes which initially I found to be pretty frustrating until I realized the platforms were color-coded to show which plane they were resting on.

Generous checkpointing also dampened some initial frustration. There were plenty of children playing Poncho while I was at the booth and they didn’t seem to get too disappointed, so hopefully even at this early stage there’s a good balance being struck between challenge and accessibility.

Poncho has been a part-time project of three developers and speaking to them over the weekend, they’ve indicated that they’ll try to finish the project regardless of whether their Kickstarter is successful or not. There’s only a few hours left, so hopefully there’s a last-minute surge in popularity for the game as I certainly had fun with it.