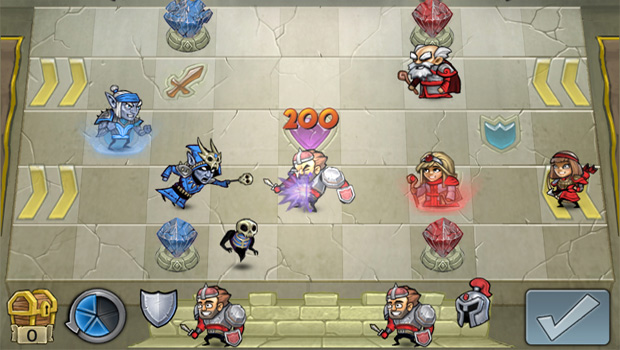 Robot Entertainment has been testing the grounds for their new iOS title Hero Academy in Canada for the past weeks, but the game has finally passed certification and should now be available on App Stores around the world. It’s an asynchronous multiplayer game where the goal is to destroy the other player’s crystal(s). In practice, it’s a bit like chess with fantasy units that each have their own strengths, abilities, and movement and attack range.

I’ve been playing it casually over the past week or so, and I’m gradually becoming addicted to the surprising amount of depth the little game has to offer. The core game is free at the cost of ads, and gives you one of two currently available races to choose from. You can buy the Dark Elves race for $0.99 and remove all the ads if you like. We’ll have some more in-depth impressions later this week, once I’ve had some more time with the Dark Elves, but so far it’s proving to be pretty great and well worth trying out a few games against your friends.

Leave your Hero Academy username in the comments and let’s get some community games started!