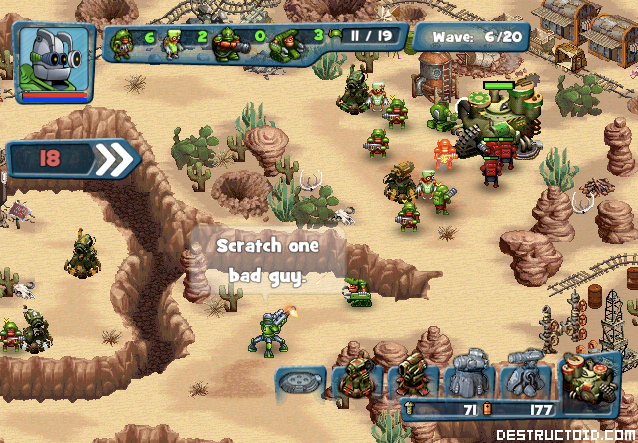 Vogster Entertainment’s Robocalypse: Beaver Defense is a quirky tower defense game set to launch on Wiiware at some point in Q3 2009. The game revolves around a mutated beaver’s vengeance quest. The goal is to stop the beaver’s army from wrecking your base by erecting static towers and deploying your own mini robotic army RTS-style.

The robots, by the way, rock all sorts of zany weaponry. The fact sheet we received at E3 about the game specifically mentions “dual chain-guns” and “flame throwers” — the two best weapons in videogames not named “ostrich hammer.”

There will be two multiplayer modes (Last Man Standing, Best Defender) and the ability to compete with up to four players via Nintendo’s silly Wi-Fi connection.

If you’re looking for something that could be as fun as PopCap Games’ Plants vs. Zombies but runs a bit differently, this could totally be the game. Make sure to check out the screenshots below and trailer for the game after the jump to get a better feel for Beaver Defense.