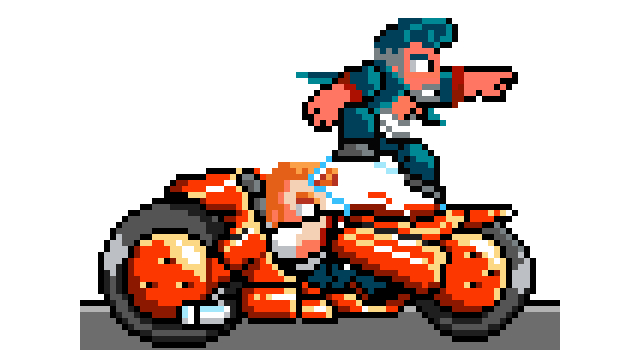 I check the River City Ransom: Underground Kickstarter everyday in hopes for the announcement of new features and/or that they’ve met their funding. Every once in a while I find something new on the page that was either added while I wasn’t looking, or was too deeply embedded in all the other joyous delights for me to notice it. Case in point, this .gif of River City’s two aged heroes on a bike that will look mighty familiar to all of you refugees from Neo Tokyo.

There had been no word up until now that the game would contain vehicular combat or fast travel, so I reached out to the devs for comment. Their plan is to try to get bikes in the game in some capacity, stating “the original Kunio-kun title Renegade had a Bōsōzoku element to it (as did Akira), so we’d like to have some biker gang homage in our game as well”, and they’re “thinking of short-lived vehicles too like bicycles, as well as public transit options since River City is much bigger than it used to be.”

They’ve even got a Grand Theft Bicycle-concept they’re playing with, where “Short-term vehicles like bicycles can be purchased or stolen. Stealing will get the authorities involved, if noticed by citizens and successfully reported. Key word: successfully”. None of that is set in stone though, as it will all be “tricky because if you’re playing four players, what happens if one person can’t keep up. —you can halt the screen or knock the other players off their bikes, but what will ‘play’ the best?”

I’ll be scouring for more details as soon as I can, but in the meantime, I’ll rest easy knowing that the team at Conatus Creative have seemingly endless passion for River City Ransom, and the know-how to channel that passion into an amazing game.