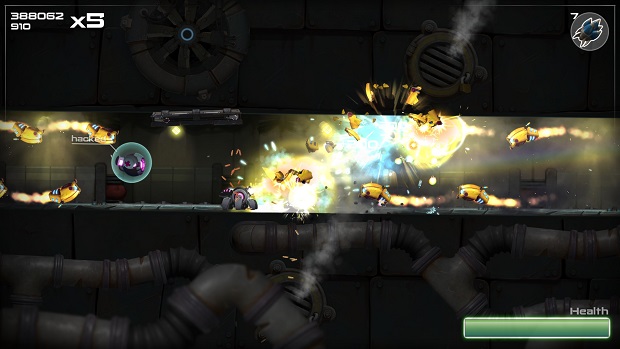 Family-friendly puzzle platformer this game is not

When I learned that Netherlands-based Two Tribes Studios (Toki Tori & Toki Tori 2) was bringing its snazzy metal-wrecking, robot-hacking, twin-stick shooter RIVE to PAX East this year, I jumped at the chance to set up an appointment to see the current state of the game.

I finally caught up Two Tribes co-founder Collin van Ginkel at the RIVE booth where he sat me down for a little hands-on with the game. I’d had some time playing an earlier version that was released last fall before leaving for the show, but what was on display at PAX East this year had obviously seen some major improvements.

For starters, the demo on hand had my previously ground-based, spider-like vehicle transformed into a nimble spacecraft, dodging and blasting its way through an asteroid belt on route to the facility to where the rest of the demo takes place. The addition of side-scrolling flying sections was a pleasant surprise and I hope that in the final version, there’s even more of them.

The touchy but precise movement controls while flying were a little tricky to get used to, but by the time I had passed (collided with) a few asteroids I had full control of my ship, chewing through all that was in my path and easily outmaneuvering the spinning, laser-firing turrets that appear towards the end of the section. 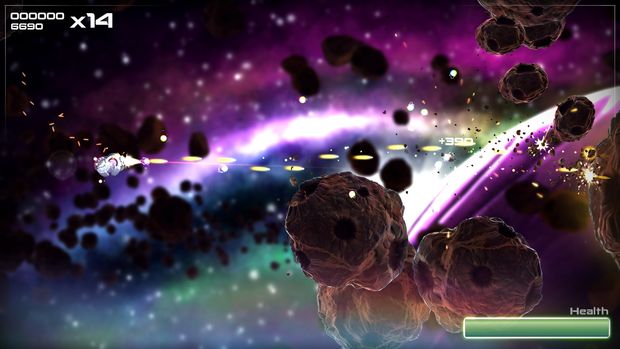 Once safely out of the asteroid belt and into the facility, RIVE began to look a lot more familiar. My spider-like vehicle scuttled across floors, tracking baddies with its 360-degree auto-cannon and laying waste to the swarms of fast-moving enemies that attempted to impede my progress.

RIVE mixes up the intensely satisfying shooting elements with a healthy dose of action platforming as you make your way deeper into the facility. Jumping is controlled with the left trigger, which at first felt awkward but, according to Ginkel, was a necessary concession to accommodate the game’s right stick-controlled aiming mechanics.

After a few successful hops and double-jumps, the ground-based movement began to feel natural to me again, allowing me to track enemies mid-air and deliver a hail of bullets in full 360 degrees, creating a colorful light show of explosions intermixed with charred bits of enemy debris. 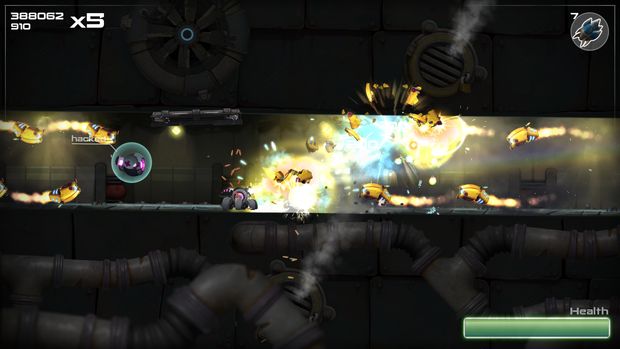 As I blasted my way deeper into the facility I began to pick up consumable items. Only three were available in the preview build; two offensive and one pickup that would replenish health. EMP projectiles that could freeze enemies in place with an electromagnetic pulse and homing missiles were the two offensive types on offer. Out of the two, I would always go with the missiles — stunning your enemies is nice, but turning them into scrap is nicer.

Hacks also played a big role in the game, adding some interesting tactical opportunities if used inventively. You start off picking up one that will allow you to override security systems, unlocking doors that bar your path.

The next one you find allows you to hack Lifebots, floating drones that will top off the health of whomever is in control of them at the time. One really handy use I found for the Lifebot was in one of the two boss battles in the preview. By taking control of it, I could stay below the boss pouring out the damage while my floating medic topped me off with health, mitigating any damage that I took in the process. 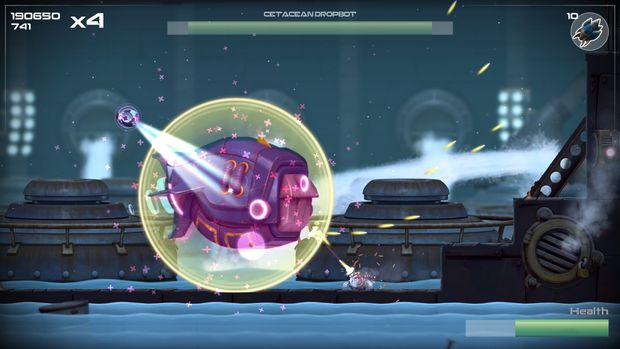 Lastly, you’ll discover a hack that will allow you to take control of the pesky Kamikaze bots encountered throughout the levels. Once in control of them, a zero-g field radiates out, creating a sphere you can hop into and use for a lift to reach previously inaccessible sections in the level.

Wrapping up the demonstration, I joked with Ginkel about how radically different RIVE is from Two Tribes’ previous games. He nodded in agreement and grinned proudly as we watched PAX attendees blast their way through the beautiful shooter displayed on the large monitor before us. It truly is a gorgeous title, but it’s got the chops to back up the good looks in spades.

If RIVE’s any indication of the future direction of the development studio, I think we’re all in for a treat. While the puzzle platformer Toki Tori 2 is a solid title in its own regard, I’m really happy that the studio went in this new action-oriented direction. RIVE just does so many things right you’d think its creators had been designing shooters all along.