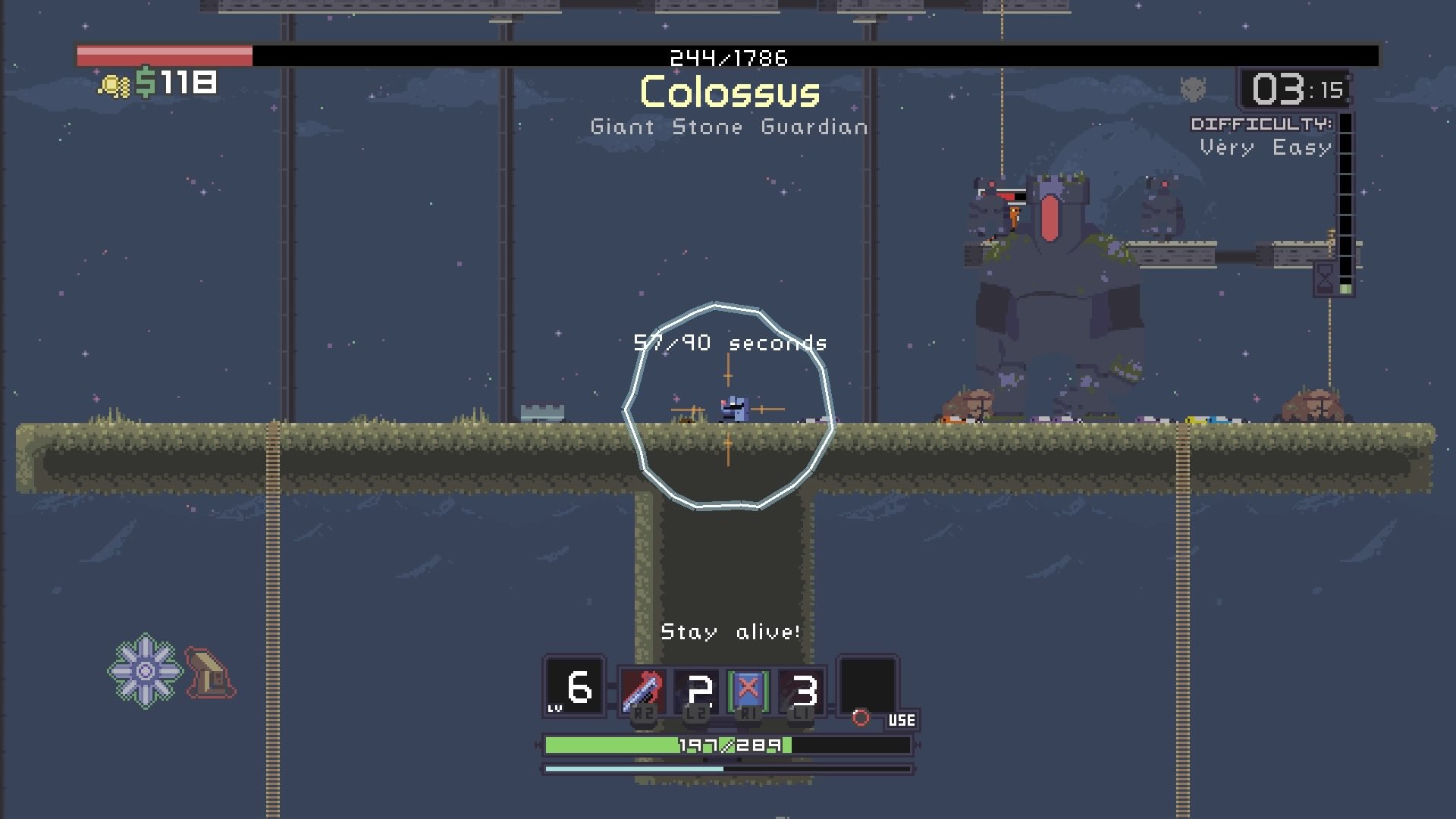 It’s only fitting that right as an exciting new roguelike enters my life and rekindles my interest in the genre, an old favorite comes calling. Lately, Risk of Rain has been eating up evenings that would otherwise be wasted on failed Enter the Gungeon runs, but I can’t be mad about that — I dug the heck out of this game two years ago, and I still dig it now that it’s on PlayStation 4 and PlayStation Vita.

While there was some initial fumbling while I got used to playing on a gamepad (your standard attack and three abilities are mapped to the four triggers by default), everything else came rushing back.

Risk of Rain is a tough action-platformer the puts you in a race against the clock as a weakling who can, with perseverance, become nearly unstoppable. The difficulty rises over time, putting pressure on you to quickly stock up on a huge pool of passive items, seek out each level’s randomized exit point, and activate it to trigger a countdown so you can warp out. You don’t want to stick around for long, but you also can’t skip out on gaining XP and items or you’ll be far too frail for the final boss.

After 32 hours on PC and easily another 9 on PS4, I still haven’t grown tired of Risk of Rain‘s combat. Even the most basic enemies can be a serious, unrelenting threat. It’s hectic! You have to smartly juggle your skills as they come off cooldowns and also know when to dodge or flee to catch your breath. The platforming itself can be a little finicky, in part because of how tiny the characters are against the sprawling, zoomed-out backgrounds, but it’s something I’ve learned to overcome.

These PlayStation ports are Cross-Buy (pay once for both) and Cross-Play. While I didn’t test the Vita version, I had an all-around smoother experience with Risk of Rain on PS4 than I ever did on PC. In single-player, the game performs well even when there are a bunch of bosses on-screen. That said, the online co-op was prone to slowdown. It’s playable, for sure, just not ideal. In spite of a not-great ping, I was able to finish an hour-plus run without the session crashing (sorry for hogging the drones).

As far as double dipping for these ports, at $9.99 for both copies, that’s an easy recommendation to make. I say go for it, and good luck drowning 20 whorls again. For those of you considering Risk of Rain for the first time, you can brush up on more of the basics by reading Darren’s original review.