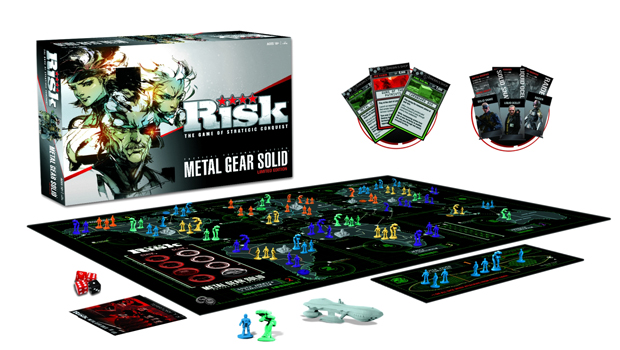 Over the past decade, the classic board game RISK has undergone a lot of changes with the game seeing both a major streamlining of its rules in 2008 along with a number of licensed, rule-variant versions based on themes and popular licenses. Today, Metal Gear Solid joins the ranks of those licensed products as the “game of global domination” takes on Hideo Kojima’s espionage-laden setting.

As with all of these licensed releases, you’ll be able to play the standard RISK game straight away. The box also comes with special dice and an Outer Heaven carrier piece used for sneak attacks in the game’s other two rule sets. If there is a board game which has successfully managed to adapt itself to licenses while not simply being a promotional tool for them, it’s RISK, so I have high hopes for the quality here. But since I have no friends, there’s not much point in my getting it. Anybody thinking of picking this up?

Filed under... #Board Games#Metal Gear Solid