Rise & Shine takes place on Gamearth, a planet where all video game characters live, similar to Wreck-It Ralph or Toontown in Who Framed Roger Rabbit? A ten-year-old boy named Rise becomes an unlikely hero when he witnesses a beefy Gears of War-esque character and a pointy-eared, tunic-wearing elf kill one another. With the elf’s dying breath, he gives Rise a magical talking gun named Shine so the boy can prevent evildoers from destroying Gamearth.

If you don’t like video games that constantly have nods to other games, you’re probably going to be annoyed with Rise & Shine, as most of the humor is referential. Personally, I can find this stuff hit or miss, but I think it works in this case. It wears it on its sleeve, rather than trying to sneak it in. The title screen alone has many references to popular games and a not-so-hidden PlayStation as part of a building. 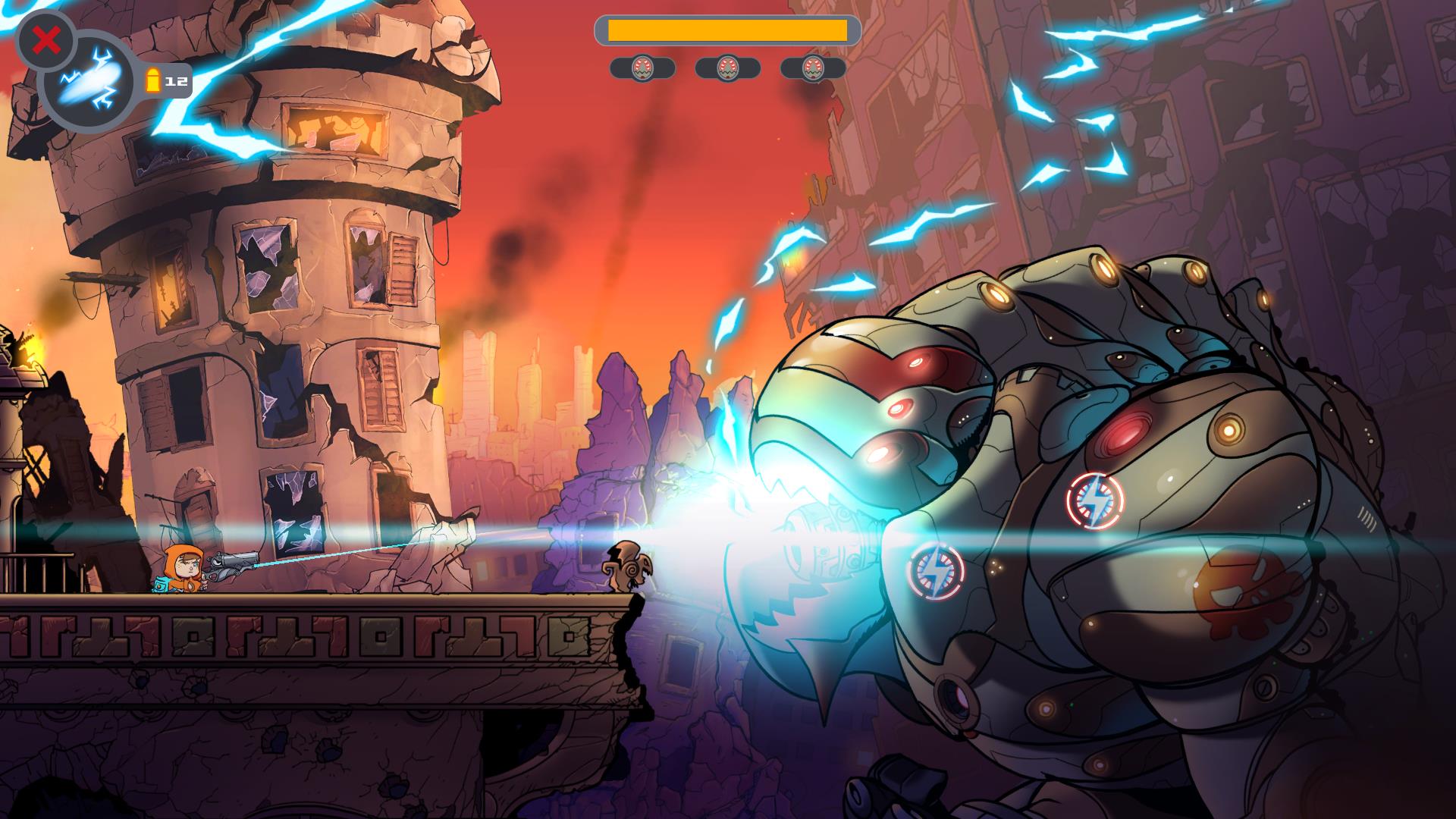 The hand-drawn cartoon visuals are beautiful, especially with the game’s smooth frame rate. The world and characters are colorful and vibrant, the animations are great, and somehow everything looks cute, even if there is occasionally a small amount of gore.

But mostly importantly, the gameplay is solid. Blowing away enemies with Shine is satisfying and difficult in equal part. With tight aiming and a destructible cover-based system, Rise & Shine takes well-known formulas and combines them into a delicious cartoon-y goulash. Aiming consists of holding the left trigger and targeting with the right stick, which causes Rise to walk slowly, allowing for better aim.

Most enemies take multiple shots to bring down, while Rise can be taken out in one shot by a majority of enemies, but that is negated by being able to temporarily hide behind cover. In the short press build I played, there were only a handful of places with cover, but it was almost always near a large group of enemies, thus allowing me quickly pop out and fire a few shots to thin the group before they forced me out in the open by destroying my cover. Cover-based systems typically reward patience and just make games feel tedious, but thankfully that isn’t a problem here.

The action is broken up with comic book-style cutscenes, as well as some puzzles. Puzzles so far consist of finding levers or buttons to shoot to open doors. Some puzzles require the use of special bullets that can be controlled manually after being fired out of Shine, slowly floating through the air until the perfect moment then going full speed into their target.

The boss I played had me swapping between three different bullet types available in the demo: normal, electric, and aforementioned guided bullets. At one point, it started to charge up a death laser, revealing a few electric hit markers on its body that needed to quickly be shot to prevent it from firing. Normal bullets are used to drop the boss’s health bar, which reveals a weak point on its back. This weak point has to be shot via a guided bullet three times before it finally falls.

If the boss battle I was able to play is representative of the quality of the other bosses in the game, then I’m sold on the full version of Rise & Shine releasing this summer on Steam and Xbox One.