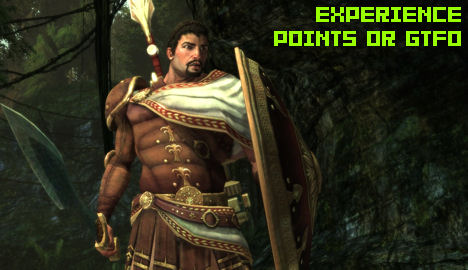 Codemasters has just sent us an article concerning its intriguing action RPG game, Rise of the Argonauts. This is a title I’ve been looking forward to hearing more about since it was first announced, and we’re pleased to be the first English-speaking site to get you these fresh new details.

I’ve been loving the sound of the game’s experience system, which this article explains in a little more detail — rather than traditional experience points, you perform “deeds” throughout the game, such as rescuing certain characters, defeating particularly nasty enemies or escaping from a battle unharmed. These deeds can then be used to pay tribute to one of four Gods who will confer unique abilities on your character.

Codies also promises realistically lethal combat in which every hit counts and a “hundred different paths” leading toward the game’s one conclusion. Of course, these words come from the mouth of Codemasters, so you’ll expect them to be just a tad optimistic, but if they come close to pulling off some of the epic gameplay ideas presented in this document, I will be a very impressed man.

Hit the jump for the Rise of the Argonauts manifesto, and check out the images too.

Most role-playing games follow a familiar pattern– kill enemies, get experience points, level up, buy abilities, repeat. While this loop is tried and true, it’s also characterless. Everything is based on combat, and very little draws on the choices that the player has been making – choices that are core to an RPG experience.

In Rise of the Argonauts, Jason progresses by increasing his Favour with his four patron gods – Ares, Athena, Apollo, and Hermes. Instead of merely gathering experience points, Jason performs “Deeds”, which he may then dedicate to one of the four gods watching over him, increasing his Favour with that god. Each god has their own set of unique powers and abilities that reinforce particular play styles. You can’t go wrong – what kind of Jason do you want to be?

Defeating a score of enemies while remaining completely unscathed is Deed-worthy, as is saving a poor merchant hurled into the Arena, slaying of a particularly fearsome foe, or effectively outwitting or intimidating an NPC. Rather than gathering nameless “exp”, each Deed chronicles a key moment or achievement in Jason’s journey.

The other way to gain Favour with the gods is through narrative choices. Dialogue in most games exists to progress the plot, and every so often provides a moment where the player will gain some experience. In Rise of the Argonauts, since the gods are always watching Jason’s actions, every choice you make will impact your Favour. For example, choosing a confrontational approach will please Ares, while a more cunning course of action would appeal to Hermes, increasing your Favour accordingly. Gone are the days of clicking endlessly through dialogues – in Rise of the Argonauts, every choice matters.

The Inventory System: No Endless Bags of Holding Here!

Heroes in games, as in all great adventures, often find artefacts of great power and importance. However, rather than exalting these precious creations, they simply stuff them into their already-bursting backpacks, filled to the brim with countless other weapons, potions, and other assorted loot waiting to be pawned off on the next blacksmith they find. Endlessly gathering trinkets and baubles, you often end up playing the mule more than the hero.

In Rise of the Argonauts, Jason has no backpack, let alone one that needs to let him hold four times his weight in longswords.  Jason only carries what he needs: his Armour, Sword, Mace, Spear, and Shield, all of which are visible on his person at all times, so there’s no need to sift through an inventory screen to see what he’s bringing into battle.

Jason has no need for the mundane gear of his enemies or a simple shop in town. Every time you gain a new piece of equipment, it will happen in a more meaningful way than merely buying it from a random storekeeper. Each item has its own story, its own character, and its own unique role in combat that will be useful throughout the entire game – choosing the right item to equip is an important tactical decision.

The items Jason isn’t carrying need to be stored somewhere, and the Armoury dedicated to this purpose aboard his ship, the Argo.  Beyond just the nautical marvel of mythological Greece, the Argo is Jason’s mobile headquarters. Any surplus equipment you find is sent to the ship.  Upon your return, you can refit Jason at your leisure before setting out once more in search of the Golden Fleece.

Combat is punctuated by countless moment of epic lethality – swords cleaving through shield and bone, hurled spears pinning warriors to the walls – lethality permeates combat in Rise of the Argonauts. It is simply explained: A single strike with any of Jason’s weapons can and will kill an enemy.

This is different than most games.  Usually, enemies have a huge number of hit points that the hero must wade through before the enemy finally dies.  Even then, that’s assuming that the hero was even “allowed” to hit the enemy based on a number of different variables, from the hero’s level, to his current weapon, to his skill with that weapon, to the armour of the enemy he’s fighting….

While these combat systems can be very fun, they simply aren’t realistic.  Our entire combat system was built on the concept of “What You See Is What You Get”.  If you ran someone through with your spear, you’d expect that person to be dead, and in Rise of the Argonauts, that’s what you’d get.

This means that if you happen to miss an enemy, it wasn’t simply because of poor luck, but rather because you actually missed the enemy. As enemies get harder, you’ll also need to get past (or through) their shields, because your attacks can only kill your foes if they hit the enemy’s flesh. That said, the same goes for your opponent: If you want stay alive, either keep out of reach, or keep your shield between you and them.

Combat in Rise of the Argonauts is fast and deadly.  Even a glancing blow will wound enemies, changing how they move and behave, while heavy strikes will kill an enemy outright.  Only the most fearsome beasts can survive multiple blows, and – should you be unlucky enough to face them – be ready for the fight of your life…

Always remember that Jason and enemies operate under the same rules – the only way to survive a battle is to make sure it is your weapon which finds its way into your opponent’s flesh, and not the other way around.

Choices: One Story, a Hundred Paths

In many ways, the path before Jason is clear and distinct, and he walks it unerringly, no matter what the cost: Find the Golden Fleece, and bring his wife Alceme back to life.

Yet from this simple story begins a legendary quest, a sprawling adventure about a true hero on an epic journey.  You are not simply playing a village boy who found his father’s magic sword in the attic and earns his chops fighting rats in the fields.  You are Jason, King of Iolcus, and your quest is to bring the love of your life back from the dead, gathering heroes to your side, and leaving the bodies of countless foes in your wake.

Nearly every action you take will have some sort of effect – on your character, on the way the Gods perceive you, and in the way the story responds. Save a merchant from certain death, and you will encounter him later, reunited with his family, which triggers its own unique arc.  Let him die, and you will instead discover his distraught widow in utter despair, generating a different set of quests.  Run through the city of Mycenae with Atlanta and Pan by your side instead of Hercules and Achilles, and the island as a whole will react accordingly.

So while there is no doubt that, like all great stories, Jason’s journey will one day come to an end, the choices that you make, the impacts that they have, and the stories that will be told, are yours, and yours alone.