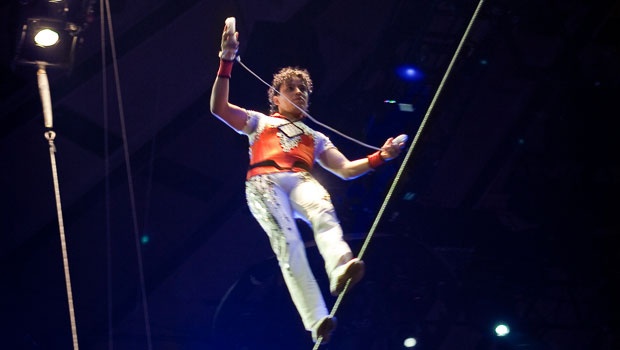 2K has announced today that it will be publishing games based on Ringling Bros. and Barnum & Bailey Circus this year. Coming to the Nintendo DS and Wii, not much is known about the games; more will be revealed at E3.

According to a press release, a recent high-wire performance saw the artists walking on a 25-feet above the ground, using only a Wii Remote and nunchuck for balance. You can see it in the picture above, but it’s hard to tell whether they’re using the strap for the Wii Remote. Along with the Wii Remote jacket, we all know how important the strap is.

This game on the Wii cries out for Balance Board support. And a game where you ride the back of a tiger as you jump through a flaming hoop. That happens at the circus, right?

NEW YORK–(BUSINESS WIRE)–From a dizzying height high above thousands of cheering circus fans in New York City’s famous Madison Square Garden, 2K Play, a publishing label of Take-Two Interactive Software, Inc. (NASDAQ: TTWO) and Feld Entertainment, Inc. revealed that Ringling Bros. and Barnum & Bailey will be taking the excitement of “The Greatest Show on Earth®” to the next level by partnering to develop circus-themed video games.

For the first time in the near 140-year history of Ringling Bros.®, the breathtaking thrills and timeless magic of this storied brand will be coming to the Wii™ home video game system from Nintendo and Nintendo DS™. The new Ringling Bros. themed games are scheduled to ship this holiday season as 2K Play further extends its portfolio of family friendly video game offerings.

“We are very excited to partner with 2K Play. These upcoming games add an entirely new interactive dimension to the Ringling Bros. and Barnum & Bailey experience,” said Nicole Feld, Ringling Bros. producer and Feld Entertainment Executive Vice President. “Now circus fans of all ages can continue to experience the thrills and excitement of Ringling Bros. when they play these new games at home.”

During a recent Ringling Bros. performance at Madison Square Garden, and in celebration of this partnership with 2K Play, a Ringling Bros. high-wire artist took to the air and made a thrilling 25-foot walk across a tightrope while maintaining his balance with only a Wii Remote™ and Nunchuk™ in his hands, to the delight of upward-gazing onlookers. It no doubt was a precursor of what to expect in the upcoming video games.

More information on 2K Play’s upcoming games for Ringling Bros. and Barnum & Bailey will be available at the 2009 E3 Expo in Los Angeles this June.