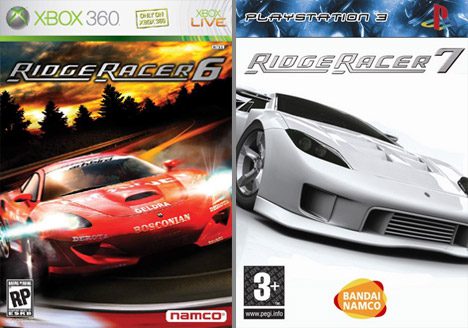 The PS3 is powerful. Really powerful. Its 3.2 GHz Cell processor was developed by Sony, IBM and Toshiba in a joint effort, and we all know Sony’s marketing executives have been going on and on and on about how the PlayStation 3 is “true next-gen,” and how it supports “true HDMI” and so on and so forth.

Well, one of the games Sony is depending on to demonstrate the capabilities of the PS3 is … that’s right, you guessed it: Ridge Racer

Or more specifically, Ridge Racer 7 by NAMCO BANDAI. Responses to the game at E3 2006 were varied, with some drooling over the game’s breathtaking graphics, and others claiming it was just Ridge Racer 6 with HDMI support.

So … how do the two games hold up when you compare them to one another?

Someone over at Dream-gamers decided to do a little comparison of the two titles, and this is what they’ve come up with:

Here’s where it gets interesting, though.

The poster claims that despite the difference in time and the hardware supporting the two games, Ridge Racer 6 for the 360 looks a lot more detailed, and has posted some pictures to back up his views.

He points out that in the above comparison, the boat has disappeared from the PS3 game. The water in the 360 version seem to look more convincing, too, while in the PS3 version, it just looks “flat”.

In this picture, the road, the shadows, and even the railing all look better in the 360 game. The only addition the PS3 version makes is the use of illumination to make certain elements more visible onscreen (like the trees).

Here are the final two pictures that blew me away.

There you have it. Several other comparisons have been made, too, between the two consoles, with people saying the games they share look almost identical on both. I suspect it’s going to be quite a while before the PS3’s supposed graphical superiority starts to show in comparison to the 360.

Many thanks to Luis De Jesus for the tip!