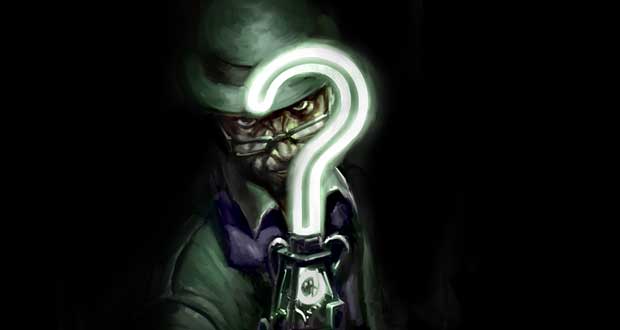 In Batman: Arkham City, Riddler is done messing around. While his presence was felt in 2009’s Arkham Asylum — he left hidden clues all over the massive institution — he’s finally ready to come out of hiding.

During a demo of Arkham City at GDC a few weeks back, Rocksteady’s Dax Ginn showed us the same demo our own Hamza Aziz had seen a few weeks back. It was, to put it mildly, a mind-blowing step above what we saw in Arkham Asylum. But the big news was something Hamza hadn’t seen: the announcement that the brilliant Edward Nygma wouldn’t just be taunting Batman this time around, but would have a physical presence in the world of Arkham City. 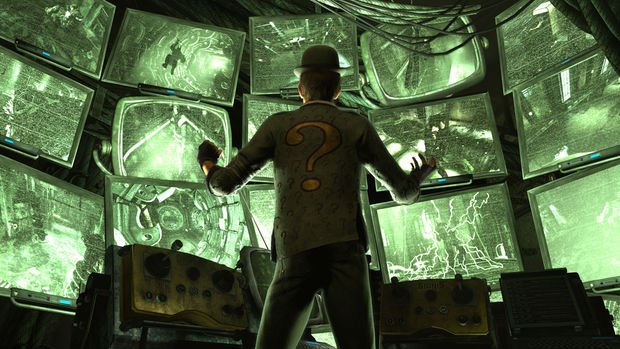 Our demo ended with Batman descending upon a rooftop as his Cyptogram device was picking up a strange signal. He stops in front of a large billboard, the words “Turn on and Tune in Before Someone Checks out – 275.00 325.00” crudely scrawled on its face. The Dark Knight jacks into that particular frequency and we’re given our first glimpse at Arkham City’s darker, twisted vision of Riddler.

While we didn’t see any gameplay in action, the vignette we were shown was meant to give us “insight into The Riddler’s state of mind.” It’s a super grimy minute worth of footage, with dark scenes of horror-like imagery, including a female struggling as she held down by a contraption that looks like something out of a SAW film. The Riddler’s voice is the clip’s soundtrack, taunting Batman the whole time. 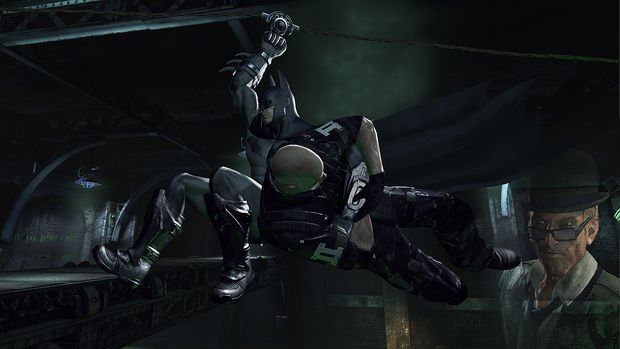 How Riddler encounters and missions will play out is still very much an enigma itself; Ginn would only confirm that he’ll be both physically threatening Batman and “the lives of innocent people.” From the sounds of things, the critical narrative path will have you dealing with the likes of Two-Face and Joker. But Ginn was hesitant to call Riddler encounters “side missions.”

“The Riddler experience is not part of the main story,” he confirmed, “but you can see how much work we put into it. It seems to do them a disservice to call them ‘side missions,’ because we take them really, really seriously.”

We hope to learn more about The Riddler’s involvement in Arkham City soon. But in the meantime, glean what you will from these first images of the