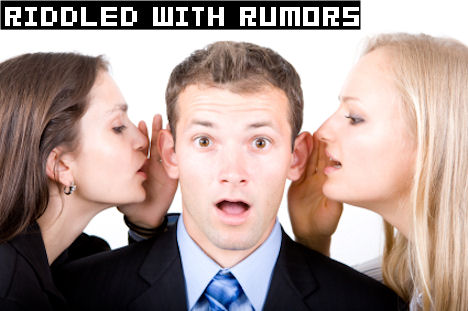 It’s Sunday, which means it’s time to fill up those empty news slots with gossip which may or may not be made up to generate pageviews. Welcome to yet another edition of Riddled with Rumors, your one-stop shop for all the latest wild claims and accusations.

Not a single one of these rumors have been fact-checked or followed up with an official source. This is because I am so dedicated to delivering our readers the hottest rumors that I am intentionally keeping myself ignorant of the truth. As game’s media’s foremost trailblazer, I am not about to let facts get in the way of stories!

Hit the jump for this week’s Riddled with Rumors.

– The console wars are heating up with a few more console exclusives going multiplatform. As third parties find themselves drenched in the financial tsunami, you can expect a lot more titles to “jump ship” in the future. Here’s a list of the latest games that, according to what I’m hearing, will be announced as multiplatform soon:

– It is highly believed around the Epic Games offices that game designer Clifford Bleszinski probably watched Iron Man once, maybe twice. This hot story follows on from an amazing rumor heard earlier in the week, where someone was 65% sure they saw Cliffy eating a piece of toast, and 98% certain that he enjoyed it.

– I’ve found out that Activision has bought the rights to The Bible, with an eye toward turning it into a franchise. According to an anonymous tipster, Activision is looking to release a brand new Bible sequel at least once a year, possibly twice. Apparently, Activision sees The Bible as an exploitable franchise that will continue to make the company money for at least ten years.

– Resident Evil is set to be remade for the Gameboy Color.

– Looking through a release listing, it has been discovered that Capcom is currently working on Garfield & Friends vs. Capcom.

– There is a disturbing rumor coming out of Electronic Arts that EA CEO John Riccitiello has a mutant son. It is unknown at this point whether or not the son was born mutated, or developed mutations at a later date, possibly due to a genetic experiment intended for mankind’s benefit gone awry. At present, it is believed that Riccitiello keeps the mutant son locked in a vault somewhere within EA’s head office, and that he feeds it eggshells.

– I’m hearing that a new school in Switzerland will soon be offering a Games Journalism course. According to what I’ve dug up, the course is only three days long, and two of those three days are spent trolling NeoGAF.

– There is currently an internal investigation going on at Microsoft after it became apparent that a monkey has been attending Xbox board meetings, unnoticed, for the past two years. According to our man in MS, the monkey is yet to be caught and nobody knows where it came from or how it kept being allowed into the boardroom. The monkey may still be attending meetings, as some have suggested it could be a master of disguise. Others believe that it is not a single monkey, but a team of monkeys working together, sending a different member of the group each time. What interest this monkey or monkeys may have in Xbox is undetermined.

– As any gamer knows, trademarks can sometimes provide subtle clues as to what games are secretly being held by a publisher. Our new regular feature will provide the latest trademarks filed by games industry members. Here are this week’s recently filed trademark names:

And that’s it for this week’s Riddled with Rumors. Remember, every single one of these rumors are true until proven false. That means they will always be true, as you can’t ever prove a rumor false. I am a videogames industry genius.