Doesn’t come with that sauce everyone wanted

I’ve never seen Rick and Morty. Not one episode. I know it’s a show people love, and it has references, and idiots trashed McDonald’s restaurants because of promotional sauce sachets, right? But I’m outta touch with you kids and yer Fortnite and yer… Maze Runners…

Still, good news for PSVR owning Rick and Morty fans, as Sony have announced that 2017’s Virtual Rick-ality is now available on the PlayStation platform. In the game, players control a clone of Morty, and must explore the universe while performing tasks, guided by nutso scientist Rick Sanchez.

The game has also received a physical release, available as a standard edition for $30 or a Collector’s Edition for $50. The latter includes a double-sided poster (featuring an amusing Last of Us pastiche), a tie-in comic-book and one of those soulless Funko Pop figures featuring “Weaponized Rick”. 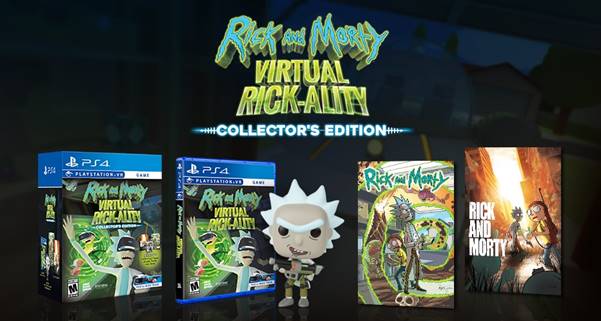