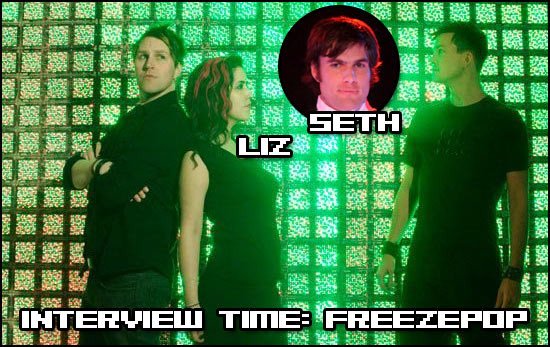 [Editor’s note: Japanator superstar Zac Bentz got a chance to interview Freezpop at a recent concert of theirs this past week. You can read the interview below or if you suffer from the TL;DR syndrome because of how dumb your brain is, you can listen to the interview mp3 style. — CTZ]

In a gaming scene full of metal masters and guitar Gods, one might question the inclusion of a band that not only has no guitar tracks, but no guitar player, or bass player, or drummer, or songs about Satan, soul crushing angst or even long greasy hair and black leather jackets. Never-the-less, the Boston based electro-pop band Freezepop has probably been featured on more mash-the-controller-in-time-with-the-music based games than any other band in the world.

What started out as an obscure sub-genre has now become one of the biggest gaming franchises ever, and it all started for Freezepop when one of their members, named after a flaky Scandinavian crusty pastry, used his job at Harmonix to get his band into Frequency, then Amplitude, then Guitar Hero, DDR, and most recently Rock Band.

Since then, Freezepop has toured the world (but not Japan!) and made zillions of crazy-ass fans through their un-apologetically upbeat and sometime silly brand of pop-electro-synth majesty. Often playing in full-on ’80s preppy tennis gear, singing into sharks and even using for-reals guitars on-stage (mostly un-ironically), the band is quickly becoming more than just a weekend distraction. These guys are serious business.

I had a chance to talk to both singer Liz Enthusiasm and keytar hero Seth Damascus-Kennedy on Monday, March 31st before their free show at UMD in Duluth, Minnesota. We talked a lot about the above mentioned gaming scene, as well as an obsessive Freezie fan, dogs, hugs, future PAX plans and whatever other random junk fell out of my mouth.

You can download and listen to the entire interview either via this torrent or this direct link. HUGE thanks to the band for taking the time to talk with me, for playing an awesome show afterward, and for making some of the best synth-pop around. Check out their site and their MySpace for more great music and news.

Here’s a transcription of most of the interview. You’ll have to check out the mp3 for the full deal, but here are a few of the main points for the audio-impaired after the jump.

: So you guys just played a show in Minneapolis. How did that go?

Liz: That was at Ground Zero, which was this pretty big place, a sort of gothy club. Yeah, it was great! There were a ton of people there. We were quite pleased.

ZB: How did you guys get involved in the video game scene (Guitar Hero, Rock Band etc?)

Liz: It sort of happened, not accidentally exactly…[band member] The Duke was working at Harmonix, and he started out there as an audio guy, so he was writing music for the games. This was back when they were doing much smaller games, they were working on Frequency and Amplitude. They were sort of more hardcore-gamer games.

Seth: Yeah, remixing games. You don’t really have remixing parties. Well, I would, but…

Liz: So, we were in these smaller games, and the response to them was good enough that we had the opportunity to move on with it. So when we could be in Guitar Hero, it was like, definitely. I didn’t know it would be that big. We got some really great hardcore fans from the earlier games, but then once Guitar Hero came out, it was just some much bigger. Then people who would have never heard of us otherwise have heard of us now. It’s been really great for us.

ZB: So do you notice more of a reaction for those songs? Are people just waiting for their favorite Guitar Hero song?

ZB: Do you get sick of that sometimes?

Liz: No…it’s a little strange. Now I know kind of what a one hit wonder must feel. But I guess you could say we’re a several hit wonder.

Seth: Yeah, fortunately we’re on more than one game.

Liz: Yeah, and all of our songs are pretty much in the same vain, so it’s not like we became immensely popular from one song that sounds nothing like our other songs.

ZB: Can you guys play the games? Are you any good at them?

Seth: I’m awesome. No…I can play Guitar Hero. I played Rock Band at a Wal-Mart for about five minutes, Sean and I did, and we didn’t get through the song. I’m really good at Guitaroo Man. When guitar Hero came out was was like “Oh, who’s going to buy a plastic guitar controller? That thing’s gonna fail!” I may have been wrong about that.

ZB: Are you guys going to be at PAX again this year?

ZB: Are you in negotiations?

ZB: OK. We look forward to that.

ZB: Do you have any other favorite videogames, other than the ones you’re in?

Seth: I just played the Lost game on 360. I like the show, so it was fun. I wouldn’t recommend it if you don’t like the show. And then I got the Orange Box, but I haven’t played it yet.

ZB: Will you be giving out free hugs?

Liz: Yeah, we generally give out free hugs.

Liz: I would prefer that they wash first. If people ask us for a hug, we generally oblige.

Seth: If they have arms.

Liz: Well you could still hug somebody without arms. You just wouldn’t get hugged back.

ZB: As long as they have a torso…

Seth: Yeah. As long as you have a torso we’ll hug you.

ZB: Maybe a head would help. Get your arms around a neck…

Seth: This conversation has gotten morbid…

ZB: Somebody apparently doesn’t know what a freezepop is. Which I find hard to believe. What kind of horrible childhood…

Liz: Really? Are they Canadian? I think they have a different name there. I think they’re called freezies there.

Seth: Should we explain what a freezepop is, or should that person just be ostracized?

ZB: I think we might need to just shun them.

Seth: Did you send her a free CD?

Liz: No…I wrote her back that actually we’re a band and we have nothing to do with making freezepops. And…she was embarrassed. And I was like, “It’s OK.”

ZB: In a live format, what kind of equipment do you use? Do you rely mostly on laptops to playback stuff?

Seth: No, we don’t use any laptops. We have two Micro Korgs, and then we run keytars out of that in MIDI. We have some backing drum and bass tracks, and drum pads. Our set up is pretty simple.

Liz: And Sean just started bringing a guitar too for a couple songs.

Seth: But don’t worry, it’s only for a couple songs.

Liz: Yeah, we don’t rock that much.

ZB: That’s something I wanted to ask. It’s kind of weird that you’re in Guitar Hero when, you know, you don’t have a guitar player, or any guitars. Did anyone bring that up beforehand? Like “maybe we need to add some guitars?”

Liz: For “Get Ready to Rock” we did add a guitar part to it, just because it seemed like, it’s a goofy rock song, let’s just make it a little more rock. Then when “Less Talk More Rock” came around we were, eh…But you know, they’re not making Keytar Hero so…

ZB: You need to pioneer that.

Seth: Yeah, a Synth Weenie game. That would be perfect.

ZB: Have you guys ever been to Japan? Ever toured there?

Seth: If someone who reads this wants us to come, just let us know.

Liz: It kind of seems like it’s a no brainer that our music would go over well over there, but without having a manager or publicist or label over there it’s kind of hard to do it.

ZB: You do have the one Japanese language track.

Liz: I wrote that after I took one semester of Japanese, and unfortunately have forgotten the rest of it, that was many years ago now.

ZB: And you have a French song. Do you speak French?

Liz: I’m not entirely fluent, but I can get by.

ZB: Have you toured outside America at all.

ZB: Turkey but not Japan? That seems strange to me.

Liz: Turkey was really weird. I do all of our mail order. I had never sold a single CD to Turkey. Then randomly a couple years ago two different promoters got in touch with us within a couple weeks of each other and they were like “We want to bring you guys to Turkey!” This is weird…OK. So we went, and it was really cool. People knew our songs. The thing is that there, it’s a culture thing where it’s just totally accepted to download music for free and burn a million CDs for your friends. Here, people will steal music and feel guilty about it, but there it’s just this accepted thing. Everybody knew the words and the shows were pretty big. So yeah, it was fun. It was ass kicking. We spent more time traveling than in the country itself.

ZB: What can we expect tonight, or at an average Freezepop show

Seth: You will lose you mind!

Liz: We try to make our live shows fun. We want it to be a big fun party. A lot of electronic bands have this reputation of being a couple dudes standing behind keyboards and not smiling…That’s not how we want our stuff to be. It’s like fun party music. So there wil be some jumping around.

Seth: Yeah, if you’re coming tonight and you have to bundle up because of the snow, bring a t-shirt, because it’s going to get ‘ot and swea’y in there.

ZB: It seems like it’s a bit darker, but still fun.

Liz: At least lyrically, I was trying to go for…less overtly goofy. ‘Cause you know, the first album has really kind of stupid songs. Which has its own kind of specific charm. I was kind of done with that I guess.

ZB: But then you do have “Do You Like My Wang?”

Liz: Yeah, The Duke was responsible for that one.

Seth: But that song’s dead serious.