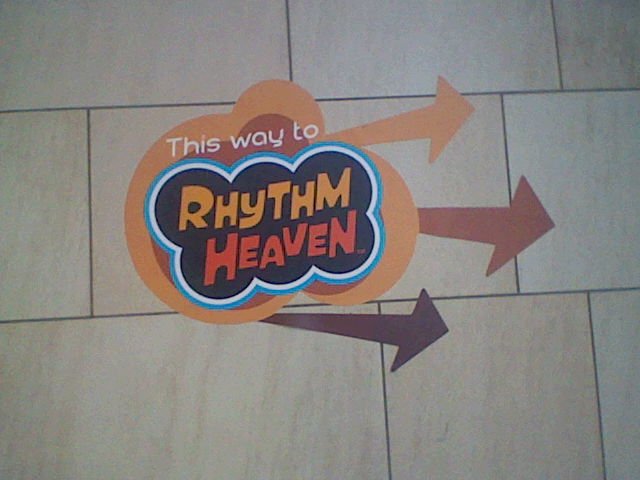 Yesterday, Matt told us about the Rhythm Heaven events going on this weekend all around the country. I headed to the one at the Burlington Mall, not expecting it to be anything worth reporting on. I didn’t even bring my camera — that’s how sure I was that it would be a wash-out. I was totally wrong. Good thing I brought my DSi. Bad thing that the DSi camera takes pretty fugly pictures.

Can you tolerate seeing some pixel-y photos of a guy wearing a neck tie with the “SCRATCH-O” DJ on it? How about if I throw in some girls wearing mini-skirts and a robot-safe?

C’mon, stop being a turd! Just hit the jump already and look at the pictures.

Here’s an overhead shot of the event. As you can see, it was pretty small, but there were always at least ten people checking it out at any given time.

This stand up was right at the mall’s entrance. Seems like, along with Beyonce, this little guy has become the game’s unofficial mascot.

This was a pic I took before I asked the people working the event if I could take photos. They saw that I was using a DSi and they thought I had stolen one of theirs. Those smiles were just to give me a false sense of security. I was about to get my ass kicked.

After I told them I work for Destructoid, they were all for posing, especially the girl doing the “rocker chic” cosplay in the middle. And no, I didn’t use the DSi camera to give the guy on the left a half smile. His face is just crooked.

In the center of the event there was a extremely Mr. Destructoid-looking robot-safe, based on one of the fat robots from the game. Reps were giving out little cards with numbers on them, and if your number opened the safe, you’d get a free copy of the game. Pretty cool.

This guy was nice, though I couldn’t resist the urge to use the DSi camera tool to make him looked stoned. I’m just so jealous that he got to wear a necktie with the nervous “SCRATCH-O” DJ on it.

Close-up of the tie.

Another shot of the reps working the crowd. You could tell they were uncomfortable, being stared at by everyone that walked by. They told me that just about everyone who talked to them called Rhythm Heaven “The Beyonce Game.” That would have made me uncomfortable, too.

A stand-up of one of my favorite characters from the game. I tried to steal it, but I got caught.

All the free sunglasses they were giving away. They actually work really well to block the eyes from harmful rays, but more importantly, they say Rhythm Heaven on the side. They have become a new family heirloom.

Overall, the event was great. The reps showed a lot of enthusiasm for the product, and were even willing to hear me lecture them about how Rhythm Tengoku on the GBA is better than Rhythm Heaven, how the English dubs in Rhythm Heaven aren’t that good, how in Japan there is a Rhythm Tengoku arcade game, and other know-it-all crap that they seriously could have ignored.

The event did get me thinking, though; why is it that Nintendo is putting on these events, while they haven’t put display models of the DSi in GameStops yet? Why are they putting all this money into promoting Rhythm Heaven, while they aren’t even bothering to bring the already English translated Tingle’s Rosy Rupeeland, Disaster: Day of Crisis, and Trace Memory Wii to the United States? I bet that bringing those games over here would cost Nintendo a fraction of what they paid Beyonce for those crappy commercials.

Well anyway, I hope it pays off. Nothing would make me happier than seeing Rhythm Heaven become another long-standing Nintendo series. Co-op-friendly Rhythm Heaven for the Wii would be my instant GOTY.