Rolling onto the App Store with considerable pedigree and an abundance of cuteness is Kotomon, the debut release of Monstars Inc. The development team features former Q Entertainment employees whose past work includes Lumines, Rez, Lost Odyssey and Child of Eden.

Not that iOS title has much in common with those games. After some hands on time with Kotomon I’d say it has more in common with Katamari Damacy and Pikmin than the aforementioned Q games, albeit in a much more compact, limited package. 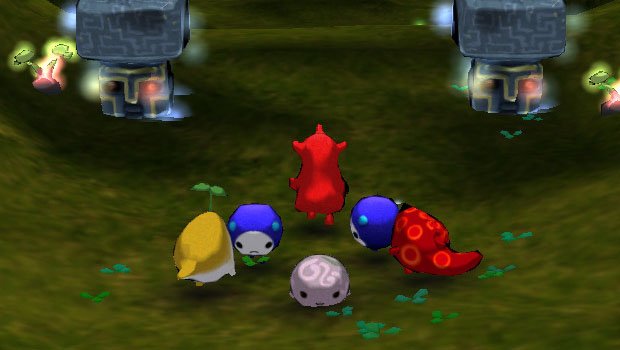 Set to a minimalist soundtrack that responds somewhat to touch, players control a pear-shaped alien that herds other monsters and uses them as projectiles to defeat enemies. Each monster has a unique set of attributes, for example, some of the first monsters you will encounter act like pinballs that can knock down entire lines of enemies if used properly, while others later on in the game breathe fire.

The biggest issue here is targeting. For a game that largely centers around aiming, the touch controls aren’t terribly responsive or tight. I frequently found myself lining up shots and having the monster go in an entirely different direction than I’d expected. It’s a minor annoyance really, and one that I’d expect could be fixed in an update, but it makes a game that isn’t forgiving even tougher as the difficulty ramps up throughout Kotomon‘s 24 levels.