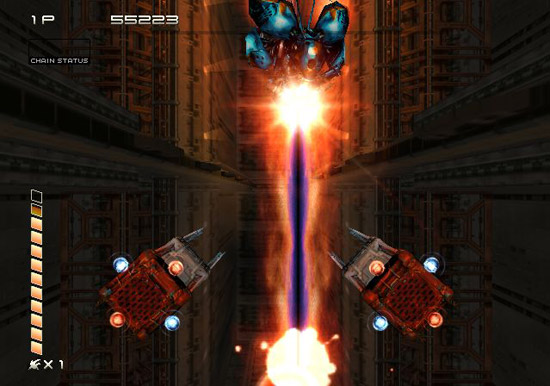 This is best week ever material if ever there was any. As you may have read earlier tonight in our community blogs, it was announced at this year’s pre-Tokyo Game Show press event that Rez is headed for XBLA early next year. Tentatively titled Rez HD, the game will feature updated HD graphics and 5.1 surround sound. Exciting news, no doubt, but there are those of us who are equally (if not more) excited about the story that this news may have overshadowed.

Not only are we being treated Testuya Mizuguchi’s classic gaming zen that many of you might have missed on Dreamcast and PS2, but it was also announced that Treasure’s Ikaruga is on the way as well, confirming the rumor we had been hearing a few months ago. I will try my best to refrain from using terms like “impossibly awesome” or “incomprehensibly delicious” and refer you to these videos of the original Dreamcast version to give you an idea of what you’re in for. Word is, this one is getting a graphical update, too.

If neither of the above titles is enough to make your pants tight, you can instead look forward to some other Live Arcade-bound games like Every Extend Extra Extreme, Omega Five, Hudson’s Exit, or Trigger Heart Exelica. You may also want to see your doctor immediately.

[Via Kotaku and madninja’s clog]