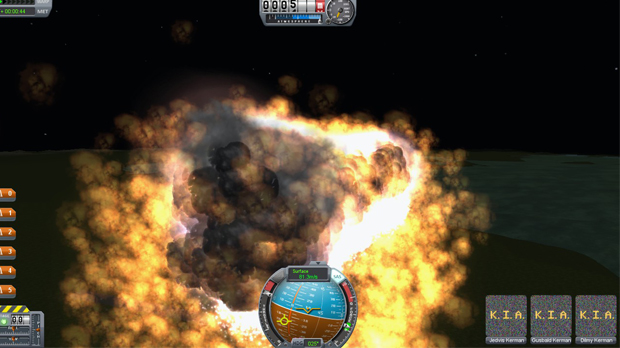 Last year, I got to take a quick look at the in-progress alpha for an interesting little game called Kerbal Space Program. The game was centered around building a rocket ship — or, more a kind of rocket-propelled contraption — to help propel some brave Kerbal astronauts into space and orbit.

It was somewhat limited at the time in that it did not have any targets for you to reach and contained only a small supply of building parts by default. Since then, improvements have been made to the game and some new content has been added. 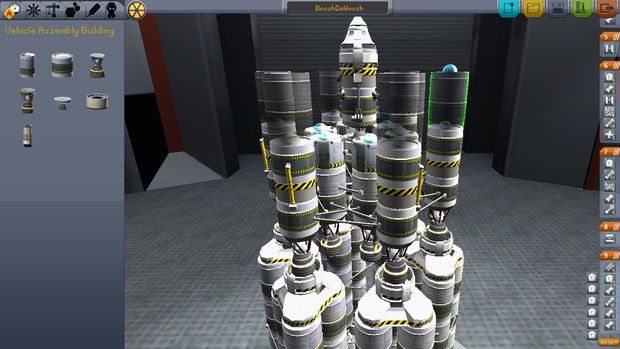 To start, there are a bevy of new stock rocket parts sitting around to mess with, such as fuel tanks, rocket boosters, and control units. This helps allow for a much wider array of designs that can be made before going to mods. Each part has distinct statistics to define it; for instance, fuel-efficient thrusters may have lower thrusting power than previous ones. These parts seem like they are geared more towards use for the final phase of the rockets, the one in which you would put landing gear on.

And landing gear you will need. Newly added is the first target destination from the Kerbal homeworld of Kerbin, the Mun. Getting to the Mun is no small task, though. Considering how the game is based on real-world physics, a lot of math governs realistic-feeling trajectories and orbits, as well as inertia. Getting off of Kerbin and throwing a ship into orbit took me a good deal of time when I last paid the Kerbals a visit. Mun, not so easy.

You can’t just shoot right off the planet to reach this destination. You need to plan out trajectories, be very careful of your thrust and speed, and make sure to build a rocket with enough fuel to last the trip, yet also one that isn’t so bulky that it will just fall back to Kerbin shortly after getting into orbit. When you do get close to Mun, there’s the ever tricky balancing act of controlling your descent, so that the rocket doesn’t crash into the surface. 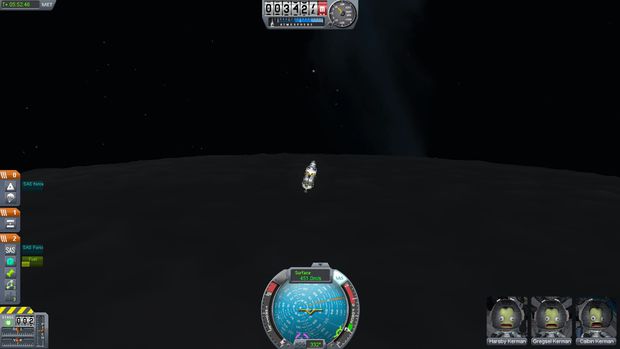 The journey doesn’t seem like much on the surface, but it’s a long and involved process that will probably make you go through a lot of trial and error — even after watching a bevy of tutorials on how to get there. Luckily, you’re also supplied with quite a few extremely useful tools to help you on your mission to Mun, as well as to keep you from having to get an astrophysics degree just to play the game.

There’s the same Stability Augmentation System units that were included in the build I tried out last year, which help control any fluctuation in flight path that would occur from an unbalanced rocket. There’s also a wonderfully made space or orbit view mode. Not only does it show Kerbin, Mun, and any rockets you might have launched at the time, it also shows the trajectories each one is currently on. It even adjusts the trajectory in real time based on whatever thrust you might be applying to the rocket, which helps in knowing how much each boost will alter your path so you don’t over- or undershoot anything. There are also markers that show up along the Gyrocompass that help you with relative precise orientation of your rocket’s path and of nearby objects or planets that can cause a collision. 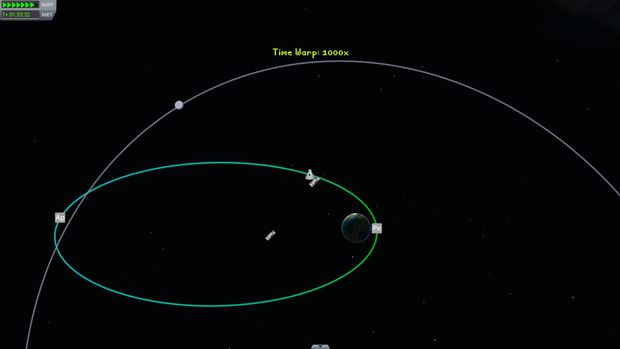 The game is shaping up well, and ran noticeably better on my computer than the previous build I played. The addition of a target to hit and explore was something I greatly looked forward to, and it was a pleasure to finally get to do. However, there didn’t seem to be anything to do on the Mun other than orbit it, land, and take off from it after that.

Oh, and you can roll your command pod around on the surface should you separate that from the rest of the rocket before setting down. There are a few issues with the game positioning rocket parts when you make obscenely big rockets, mainly related to putting things off center compared to the rest of the ship.

You can check Kerbal Space Program out for yourself at the game’s website, and pre-purchase it, netting you the current release build and any updates that would come out after that. It’s still fun as hell to watch a massive creation suddenly go out of control into a spectacular explosion, but having a goal like the Mun is pretty good too.