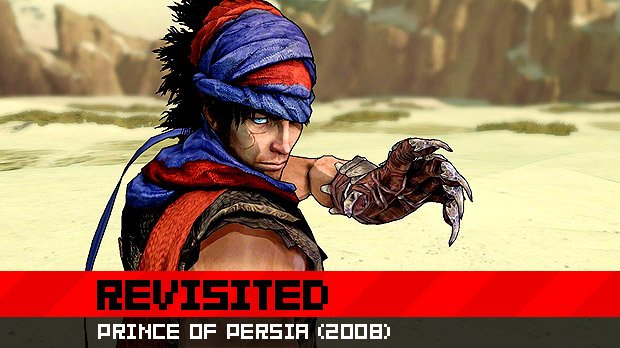 [Whenever possible, Destructoid critiques overlooked design aspects of games both old and recent for our “Revisited” series.]

The end of a game, in an ideal world, is the apex of its presentation: one moment in which the narrative and gameplay come together, building on everything you’ve learned in the past eight-to-eighty hours in a satisfying and internally logical way. .

I don’t want to be overly general and say that most game endings are bad (or good), but I do think that they’re interesting points of departure to talk about game design or narrative structure. If an ending works, figuring how it works might provide insight into what makes each mechanic or plot device effective in its own right.

Conversely, if a game’s ending falls flat on its face (like Prince of Persia‘s does), it usually serves as a decent lens through which to see where else the game falls short.

Reading Gregory Weir’s post on Lodus Novus about the ending of Prince of Persia (2008) made me reflect on my own experiences with the game which I beat a few months ago. Without getting into a lot of details, all you have to know is that, at the end of the game, the Prince re-releases Ahriman (the antagonist of the game) in order to resurrect Elika, who has died trying to defeat Ahriman. The crux of Weir’s piece is that the player and player-character’s (the eponymous Prince) motivations don’t line up and that this dissonance makes the ending effective. From his article:

Then I reentered the temple which we had fought so hard to cleanse, and cut down the final tree just as the corrupted king had done at the start of this whole mess. Because I wanted Elika to be alive. I released an evil god onto an unsuspecting world just to have the woman I had grown to love. And only then did the game end. You’ll notice that I switched to the first person there. This is a moment of true roleplaying. The player is asked to undo all of the player’s hard work because the player character wants something. There’s no real choice there, from what I can tell; you can either save Elika, or quit the game and leave it unfinished. But it’s clear what choice the Prince would make. So I took it. And the game made me do it all, not in a cut scene, not with quick time events, but using the same controls and perspective that I used through the entire game.

This is interactive storytelling.

The conversation continues into the comments, but I have a few quibbles, largely tangential to Weir’s original point. He’s right to point out that Ubisoft pulled a pretty slick maneuver with the ending—we learn more about the Prince’s character and motivations through interaction, not through dialogue or cut scene. It’s interesting that the Prince, as a character, essentially undermines the player (i.e. the person trying to successfully manipulate the game’s systems, not necessarily me or you), undoing all of the work it took to actually get to the end.

It’s also interesting to note how drastically the game changes without Elika there to long-jump you around. There’s a great scene in which the player carries Elika to the altar, and you realize that, for the first time, the Prince is carrying Elika instead of the other way around. Of course, the Prince-player has been dictating Elika’s movement the whole time, but the endgame sequence really drives that point home and it does much to underscore the fact that the Prince’s decision to revive Ahriman isn’t in keeping with what Elika would’ve wanted.

Weir is right that the ending represents a step forward in games as a medium. It is interactive storytelling, but it’s not a very good story, hobbled by poor design choices and narrative structure.

The game world is set up asa series of spokes coming off a a central hub (the Temple). The Prince and his partner Elika, a princess in exile, can travel to any of these spokes anytime they want, provided they’ve collected enough light seeds to progress. This type of design leads to a lot of freedom for the player, and, given that the game is about restoring a barren, polluted earth, it does a good job of showing off the land he’s trying to save as he jumps, climbs, and sprints across what must be miles. Seeing the sharp contrasts between the vibrant, cel-shaded, healed and dreary, grey, unhealed land is a great visual motivator, and healing an area is aesthetically rewarding.

The only problem is that most of the narrative events seem to be conversations are location-specific. The player can always engage Elika in conversation with the click of a button, filling out each character’s respective backstory. The problem with location-specific narrative and player-initiated character development is that the story quickly loses focus. It isn’t that the characters aren’t likable or relate-able, but you never get a good feel for how their relationship is developing. Because certain locations trigger certain interactions, it’s possible (and probable) to have the Prince say something caustic and chauvinistic at one point and, two seconds later, something generous and kind and charitable. With that kind of flip-flopping happening literally the entire game, it’s impossible to ever feel comfortable with, or to get a good, grounded view of, Elika and the Prince’s interactions.

I’m assuming that Ubisoft’s ideal story arc was something along the lines of thief-made-good+heart-of-gold, but without any authorial constraints, the characters and plot kind of meander for twelve hours. Ubisoft expects us to care about the Prince and Elika, but we haven’t watched their relationship grow as much as we’ve witnessed it oscillate. Johnathan Blow talks a lot about the conflict between gameplay and narrative, but the result here is a bit different: it’s the conflict between a non-linear gameplay experience and a narrative that would have benefited greatly from a more focused, guided design.

So, yes, Prince of Persia is a good example of interactive storytelling and what Weir calls “roleplaying”: making decisions based on the character’s perceived wishes, not simply because it advances the game mechanics. But, the story it’s interactively telling is literally fragmented and cut up beyond recognition, and the ending seems flat and empty.

But, even under the best circumstances, the ending to Prince of Persia would have been poorly realized

Since, like I mentioned, the Prince’s character is never nailed down, trying to figure out the ending takes a bit of guesswork.

If he hasn’t matured or developed over the course of the game and is still a self-interested lothario, then sacrificing the entire world (and his personal safety) doesn’t make much sense at all. Throughout the game, the Prince constantly bitches about having “an angry God” after him, wondering how he “got into this mess.” Leaving the Princess for dead, finding his gold-laden donkey and striking out toward greener pastures, for wine, women, and “carpets this thick,” would be totally in character.

This is a valid reading of the game — due to the fragmented nature of the game, it’s entirely possible for players to miss anything that might change their first impression of the Prince. For players who strayed too far from the specific critical path, the Prince’s decisions seem incongruent.

In contrast, there are also moments of what I perceive to be genuine understanding and bonding. Haphazard and clumsy as they are, there are definitely moments that suggest Ubisoft wanted the Prince and Elika to have a mutually supportive relationship. Weir insightfully points out that Elika’s mortality is in question from the get go:

Elika’s been dead the whole time, in a way; her father released the evil god Ahriman as payment for her resurrection. And Elika knows that in order to seal Ahriman away again, she will have to give her stolen life back. This much is foreshadowed, and I knew pretty early on that she would have to do that. All her banter with the Prince, talk of rebuilding her kingdom or seeing far-off lands… she knows that’s never going to happen.

Elika and the player may know that, but the Prince doesn’t. I really think that the Prinice falls in love with Elika and understands her plight in a fundamental way: they’re both in exile and have similiar (read: irrevocably damaged) relationships with their parents. It’s a bond reinforced through gameplay: Elika is an integral part of the Prince’s ability to fight and survive. Both from gameplay and narrative standpoints, Ubisoft suggests that the Prince and Elika share a real connection.

Re-awakening Ahriman only makes sense if we think the Prince loves Elika.

This “if,” though, is predicated on how well you can chart the Prince’s character through a series of non-chronological fragments, how well you can piece together his relationship with Elika. The game’s ending only works if you played along a specific critical path, a path that, by the structure of the rest of the game, is unlikely to have been followed by a lot of players to the extent needed to make the Prince’s actions resonate.

And even this relies on a somewhat limited idea of love. The Prince’s decision to revive her and re-release Ahriman is selfish and shortsighted and undermines everything Elika wanted. If we accept that the Prince is motivated by love, we must also accept that he has fundamentally misunderstood Elika.

The Prince also undermines many of player’s motivations, but I don’t mind that as much—I’m willing to be yanked around in the name of character development (not to mention that it doesn’t invalidate the time I actually spent playing the game, which I enjoyed). However, the Prince’s I-love-Elika-and-the-rest-of-creation-be-damned attitude a bit brutish, histrionic, and anachronistic, but that might just be a question of taste

To be honest, I’m willing to budge a little on the last point. The Prince’s reaction to love may be short-sighted, immature, selfish, and stupid, (and I may not like it at all), but I’m willing to accept it in the name of his character. Maybe that’s just how he is.

That my motivations (as a player) and his (as a character) are dissonant doesn’t bother me at all. However, that doesn’t change the fact that the transition from non-linear, open world gameplay to linear narrative is sloppy and slapdash and, unfortunately, makes a potentially powerful ending impotent. I think Ubisoft wanted me to have become emotionally invested in the the couple, but the fragmentation of the narrative, with nothing keeping it all together, made that impossible.

(Of course, I think the ending was also left open to pave the way for the sequels (it’s planned as a trilogy) and the “Epilogue” DLC, which I also think is harmful in general, but that’s another topic altogether)