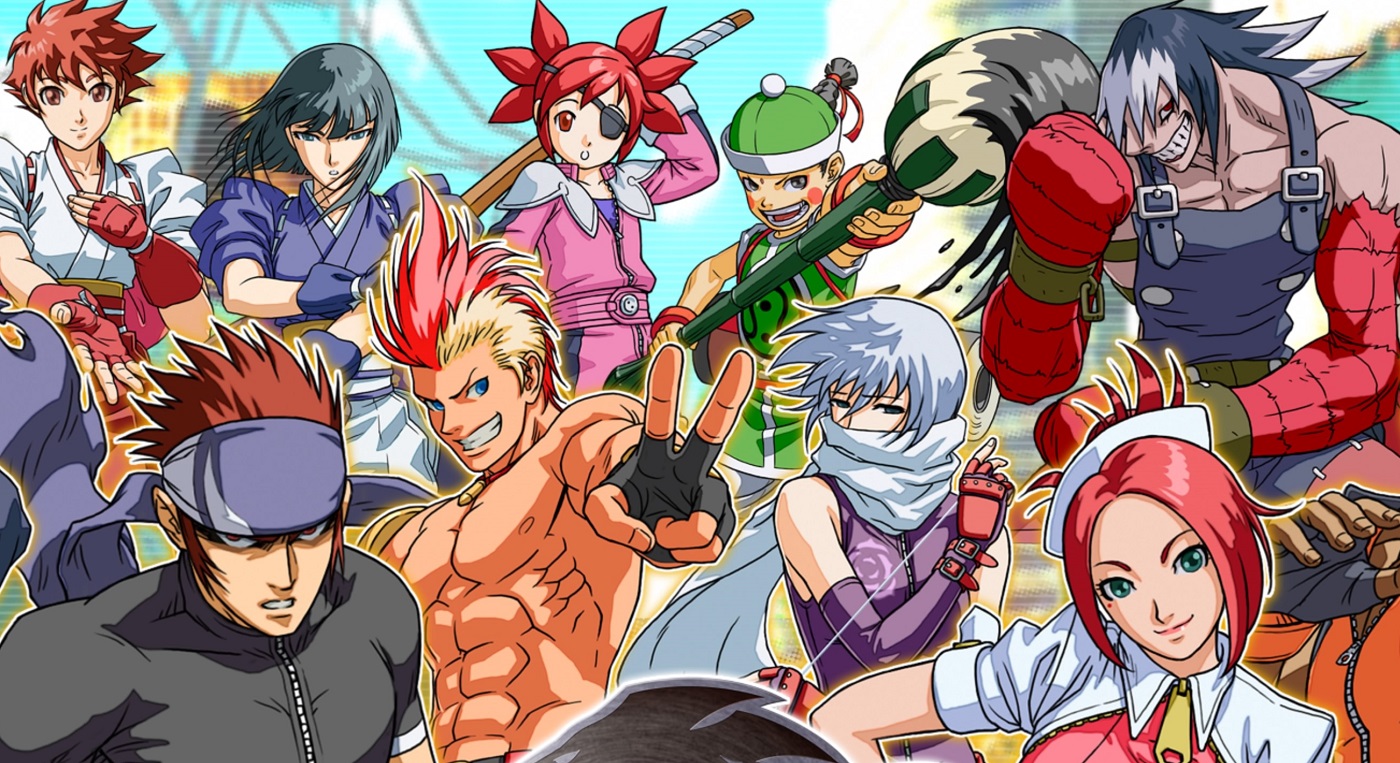 While the mid-’90s fast gave way to a love of 3D fighting titles, spearheaded by the success of Virtua Fighter, Tekken, and Dead or Alive, there were still plenty of developers who knew that the 2D aesthetic was where it was at. And due to budgetary or stylistic reasons, some franchises retained the flat-planed approach to the act of kicking names and taking ass.

And while Street Fighter III might not have quite been the launch success Capcom had hoped, the love for the game demonstrated by the most “hardcore” of the fighting game community was enough to ensure that many 2D fighters would continue to spill into the market, particularly in Japan, where the traditional look was perhaps better appreciated by digital sluggers. And so, The King of Fighters,  Darkstalkers, Samurai Shodown, and Fatal Fury would continue adopting 2D action for their main canon — leading to all-time greats such as SNK’s Garou: Mark of the Wolves.

But there was an abundance of great, lesser-known 2D fighters that either faded into the background, or simply never saw the light of day outside of their native Japan. Titles such as Breakers’ Revenge, The Last Blade, and Art of Fighting 3 could all deliver the goods, but simply couldn’t find their niche within an overcrowded, overcooked market. Ironically, it would not be until decades later — amidst the visual splendor of Tekken 7, Guilty Gear Strive, and Street Fighter 6 — that younger players would even become aware of these titles’ existence, thanks to remasters and compilations by some of Japan’s most veteran publishers.

Today, we take a look at one such release, The Rumble Fish 2, freshly launched on modern platforms by publisher 3goo. This is a particularly special case, as it represents the funky fighter’s first-ever official release not only on home platforms but also on western soil. Unfortunately, as magnificent a moment as this is for the genre, the returning fighter has not exactly put on its Sunday Best for its grand comeback… 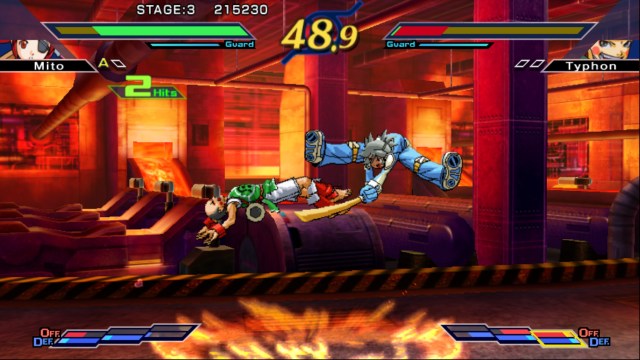 The Rumble Fish 2 was released to Japanese arcades in 2005, a product of the then-highly common Atomiswave arcade platform. Developed by jack-of-all-trades studio Dimps, the 2D fighter is the follow up to the equally obscure 2004 release The Rumble Fish, which was only Dimps’ second arcade release to that point. Following the tradition of fighting game sequels, The Rumble Fish 2 builds upon the foundations of its predecessor, adding new stages, mechanics, and characters to its already colorful roster, while rebalancing overall gameplay to provide a more measured and exciting experience.

The narrative, (of what there is to speak of), of The Rumble Fish is set against the backdrop of a decaying and dystopian city, revitalized on an economical basis by the mysterious PROBE-NEXUS. But, despite the super corp’s generosity in helping civilization, PROBE-NEXUS financial greed has created a capitalist nightmare, with the very foundations of life built around the rich and the elite. In what seems to be a distraction for the people, the company announces the F.F.S. (Fight for Survival) Tournament, which garners the interest of the area’s toughest, hardiest, or most desperate warriors. But, as is always the case, there are many ulterior motives at play, on all sides of the conflict.

This tournament is presented by RF2 to the player as a series of standard two-round, one-on-one fights, as the player climbs the ladder toward the top of the tournament bracket and the mysterious competitor that stands atop the mountain. For the most part, any fighting game player knows the score: strike, special, super, dash, crouch, backdash, block, hyper jump. Although, when compared to many of the anime fighters of the day RF2 remains mostly grounded, without air dashes, or double jumps, (though juggling is a common practice, as are Off-The-Ground specials.) 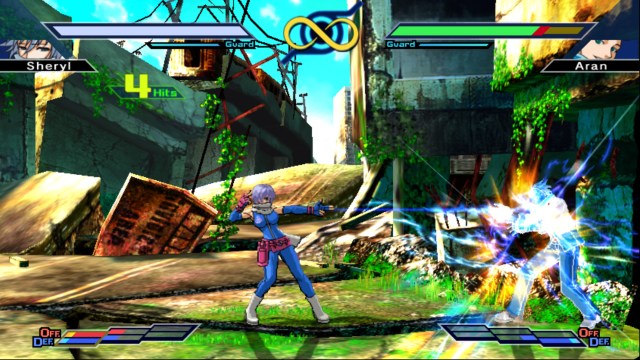 The Rumble Fish 2, however, does contain some very cool, unique gimmicks. For starters, the player is afforded two meters, one for offense and one for defense. The offensive meter builds as the player lands hits, and can be used to activate Offensive Arts (Supers) and moves such as the block-destroying “Jolt Attack”. Meanwhile, the defensive meter — built through blocking and evasion — can be spent on “defensive” special moves (perhaps a counter or a projectile shield) or the “Impact Break” — a block cancel that offers up additional frames for a counterattack. Should both meters be filled, then the player can pull off a devastating Critical Art. This is obviously an expensive spend, so use it wisely, if at all.

The Rumble Fish‘s second unique sense of identity is aesthetic and lies in its trademark “S.M.A” (Smooth Move Animation) technology. Essentially, each character is built up of multiple 2D sprites, all layered on top of one another and moving in tandem with each other. This allows RF2‘s roster to have a smooth “rotoscoped” movement style, similar to Elena in Street Fighter III. Admittedly it takes a little getting used to visually, but it’s a cool idea, and one rarely seen in fighters.

Due to the mechanical nature of the pixels, this allows for characters to incur damage while fighting, such as puffy faces, bruised skin, and torn and stained clothing. These few bespoke ideas, from gameplay to visuals, really help The Rumble Fish stand apart from the pack, and — rather than feeling gimmicky — bring life and excitement to the title.

The Rumble Fish 2 is really hearty underdog fighter. The brand and budget are not there, but the cast is fun and unique — including a sword-swinging kid in a onesie, a 10-ft tall shark man, a sexy secret agent, and a ninja who can lay booby traps around the battlefield — while the action itself is solid and engaging, with neat mechanics that actually work, rather than feel like gimmicks for the sake of gimmicks. I’m sure The Rumble Fish 2 was a great way to spend ¥100 in the arcade on a Saturday…

…Unfortunately, we aren’t in an arcade, and it doesn’t cost ¥100, and it isn’t Saturday. (It might be Saturday). 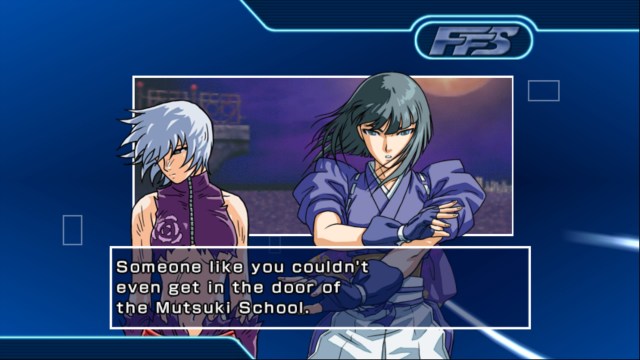 Outside of the fighting itself, The Rumble Fish 2 has some serious packaging problems. Priced at a lofty $30, there isn’t the content nor the polish to warrant its purchase. There is the original arcade mode, survival, time attack and local Vs. and online play, but many elements of this release are so poorly mastered that it makes the whole comeback seem like an afterthought. For online battles, there are no lobbies, there isn’t even a rematch feature (you are booted back to the title screen after one fight), nor is there any ping counter, replays, or spectator option.

The Rumble Fish 2 does support rollback netcode, and actually plays great when the fists and finally flying — but without rudimentary online features, the drive to engage evaporates quickly.

There is a Training Mode, but it is missing many useful features, such as a record/playback option or a screen reset. There are visual tweak options, such as screen filters, and the game’s image is frustratingly “soft” by default, with a CRT vibe that wipes away all those beautiful pixels. The game also plays in fixed 16×9, with no option for its original 4×3 ratio. And the list goes on. There are no custom keyboard controls on PC. The PS5 version doesn’t support PS4 controllers/sticks, and you cannot cross-buy the two versions together. So if you purchased RF2 on PS5 and have a PS4 stick, you’re outta luck. 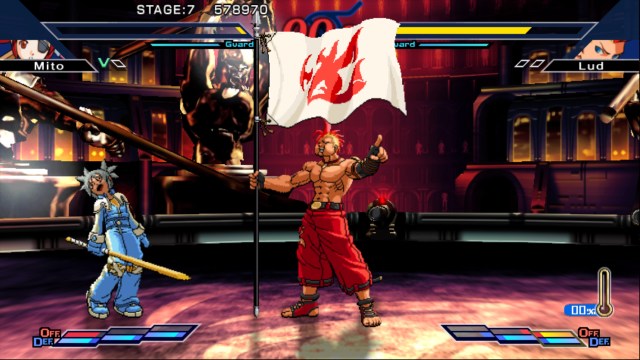 But mouth-gaping is truly withheld for publisher 3goo’s decision to lock three characters, (Beatrice, Hazama, and, ironically, Greed), as paid DLC. To have access to the entire roster of an almost two-decade-old fighter, players must roll out an extra $10 on top of the already staggeringly high $30 entry fee. I don’t hate the concept of paid DLC for fighters the way that most do, but I have to draw the line somewhere, and locking characters out of a 20-year-old 2D fighter that never saw the light of the home market is quite literally it. Staggeringly unwise decision-making by the publisher.

And thus, The Rumble Fish 2 is a woeful tale of two halves. On one half, this unique 2D scrapper is a great, old-school fighter. One finally given a brand new lease of life resurrected for the global fighting game community after years of being spoken of in whispered tones on shady emulation websites. The other half, however, reveals a shocking lack of desire to give this lost legend the comeback it deserves, with little in the way of basic features, and shockingly egregious DLC practices.

Of course, there is still the possibility that the team might see to fixing many of the aforementioned issues, but we can only review today what we can review today. At $30, with $10 DLC, it’s incredibly difficult to recommend The Rumble Fish 2 to anyone, even the most ardent fighting game devotee.

Almost 20 years on from its initial arrival, The Rumble Fish 2 still packs a punch as a spunky fighter that dared to hold its own in a crowded market, powered by a fun cast, a unique look, and solid gameplay. Unfortunately, this expensive release fails to capitalize on its grand comeback, offering barebones features, lacking rudimentary options, and greedily locking characters behind paywalls. That this long-lost fighter would receive such a half-hearted presentation is hugely disappointing.