“What will you do after the end of the world?”

This might be the most answered question in contemporary game history, so rife is the medium with stories set after the collapse of civilization as we know it. Beyond being a convenient escape hatch from the strictures of law and norm that govern human society, the post-apocalypse can be a space to ask and answer questions whose answers would be unneeded or obvious in any other situation.

It’s into this rather crowded niche that Danganronpa alums Yoshinori Terasawa and Takayuki Sugawara launch their latest effort: Zanki Zero: Last Beginning, a survival-themed adventure set just beyond the end. Their answer to the above question?

“Get to the bottom of this, dying a lot along the way, and dragging all our baggage with us.” 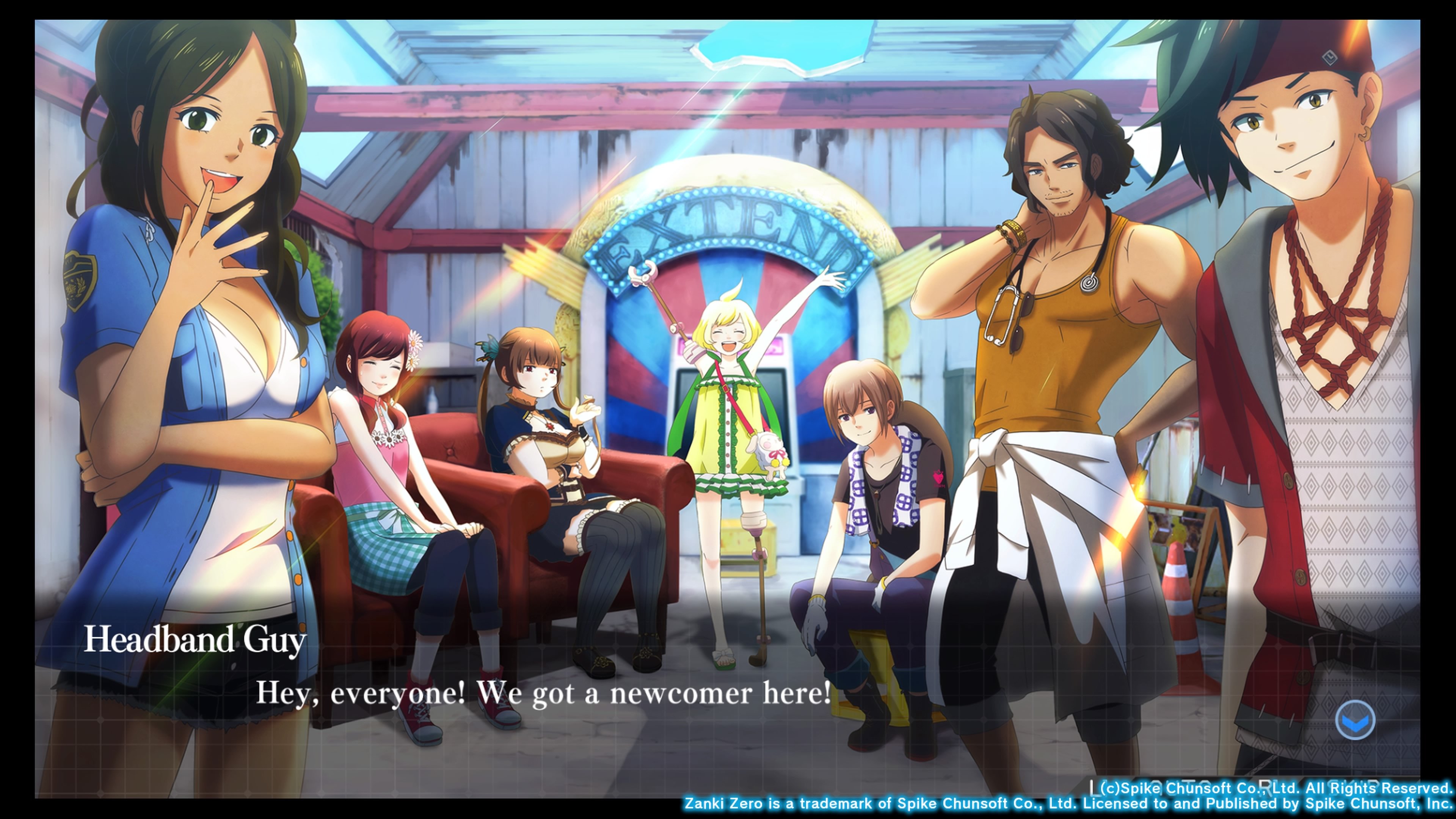 Post-apocalyptic settings may be a dime a dozen in games, but Zanki Zero impresses with some obvious originality. Players take control of eight individuals marooned for unknown reasons on the mysterious Garage Island, the last refuge for humanity after the overnight annihilation of the rest of civilization. There they must not only worry about the daily grind of just surviving the island and its dangers, but also the greater mystery behind just what happened, and why everyone is on the island in the first place. The narrative quickly shows the roots it shares with the likes Zero Escape and Danganronpa. Wild reveals, dark secrets, and sci-fi twists abound, not least of which involves a crazy cycle of human cloning.

The survivors are, through a weird little device implanted in their navels, tied to something called the “Extend” system, which grants them functional immortality for as long as it takes them to solve the mystery and escape the island (or save the world, depending on who you believe). “Extend” is basically on-demand cloning – They can die over and over again, but can be resurrected, popping out of a strange arcade cabinet in a de-aged child form, their memories intact. There’s a catch, of course – their clone lifespan is locked to just thirteen days. Even if they sit quietly at home, they’ll grow, age, and die in less than a fortnight. The only way to break that cycle is to rebuild the rest of the machine, exploring the island and its labyrinthine ruins for parts. 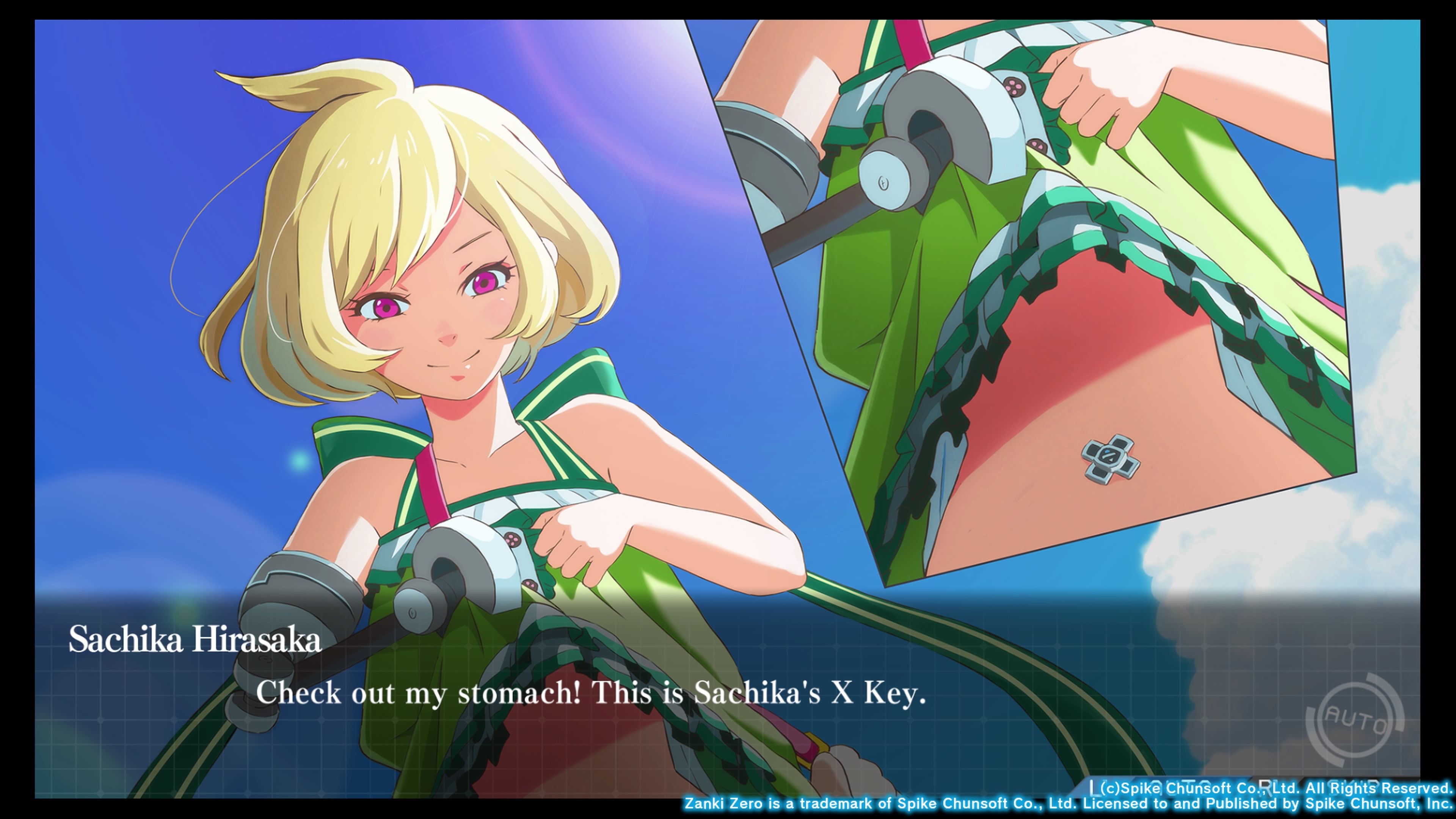 In all this, they’re heckled and motivated by Sho and Mirai, a Goofus and Gallant-like pair of classic-style cartoon characters inhabiting “Extend TV,” a show that plays on monitors scattered throughout the environs and forming the main vehicle for Zanki Zero‘s storytelling. Sho and Mirai, much like a certain two-tone bear, give the characters missions, challenges, and at regular intervals, air secret “conquest videos”, stylized production delving into each character’s dark, often tragic past.

The writing and characterization of each of the eight cast members are top-notch, and their backstories delve into some surprisingly dark places, contrasting heavily with the absurd, colorful visuals and character designs used to present the scenes. Sensitive topics like incest, suicide, and sexual coercion are explored, putting it beyond the pale for the relatively teen-friendly Danganronpa. The vignettes are made more intense by the fact that each chapter shifts point-of-view, letting the story be experienced through the eyes and from the thoughts of the character that part of the story is about. 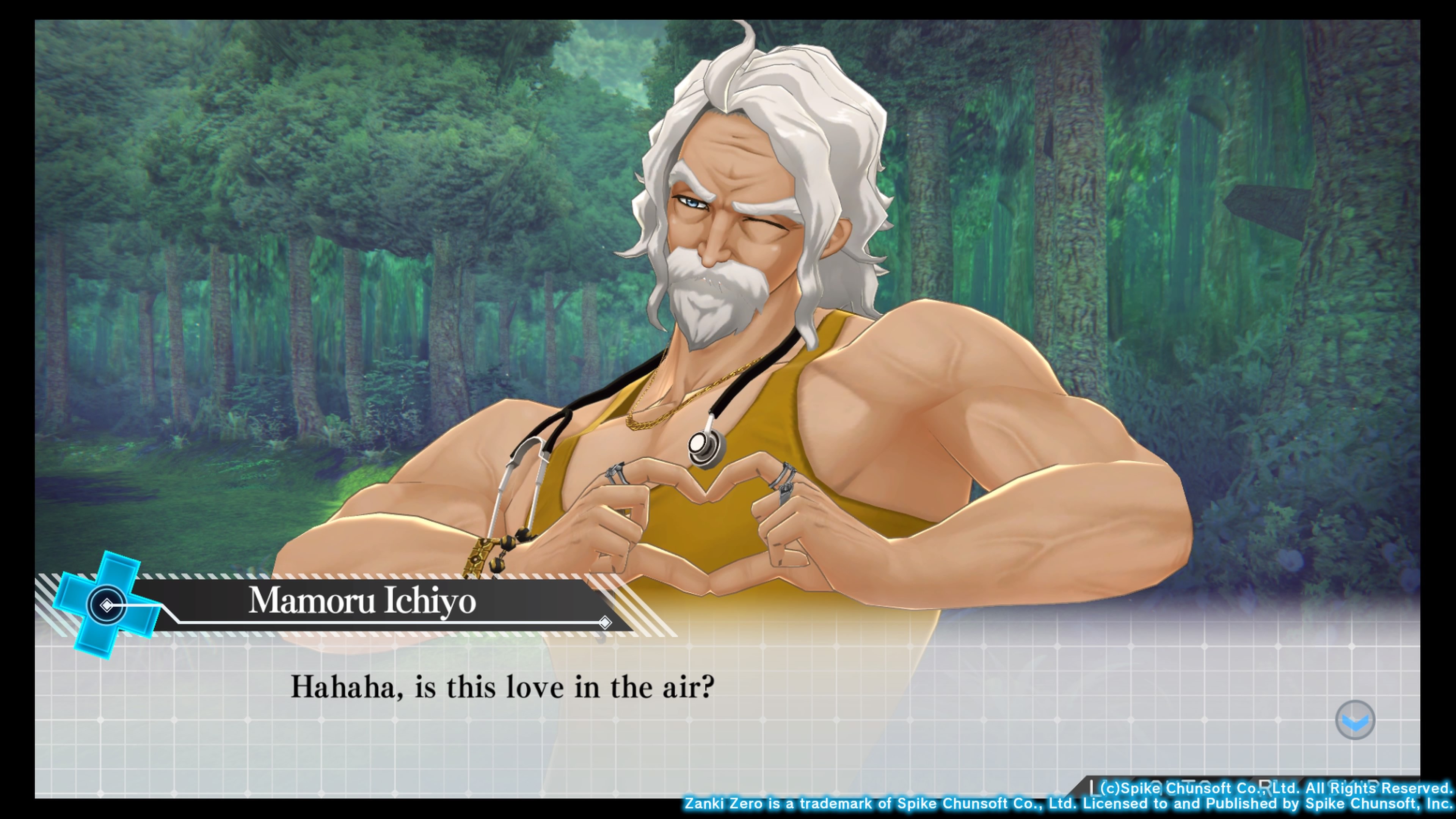 The narrative may be great, but what I feel more let down by is the game it’s all couched in. For all I’ve said about the story and characters, Zanki Zero‘s gameplay is somewhat less obviously memorable. Featuring the involvement of Lancarse, creators of Etrian Odyssey, Zanki Zero is structured as a Japanese-style roguelike first-person dungeon crawler. Players will move their party in first-person through the corridors of the island’s many and varied ruins, opening doors, solving puzzles of varying complexity, scavenging for supplies, and fighting monsters. They’ll also be dying, quite a lot.

Thankfully, the Extend system keeps the game from descending down the rabbit hole of being as torturous as more famous roguelikes and dungeon-crawler titles. Players can pay a cost in points (earned through combat) to revive any dead party members whenever they’re back at base, bringing them back to life as children (who eventually grow up, and grow old, over the span of their thirteen-day lifespan). The kicker to Extending is in the “Shigabane,” optional bonuses that can be added to a resurrected character (increasing their Extension’s point cost), and unlocked by the character’s experiences in their previous life. Killed by a boar? The next live’s Shigabane set might improve that character’s resistance to damage inflicted by boars or blunt trauma. Died as a kid? Next time around, that character might have a longer Child phase in their lifestyle. Shigabane make for a fascinating inversion of the old saying “Whatever doesn’t kill me makes me stronger.” Indeed, whatever did kill you last time gives you a chance in your next life. 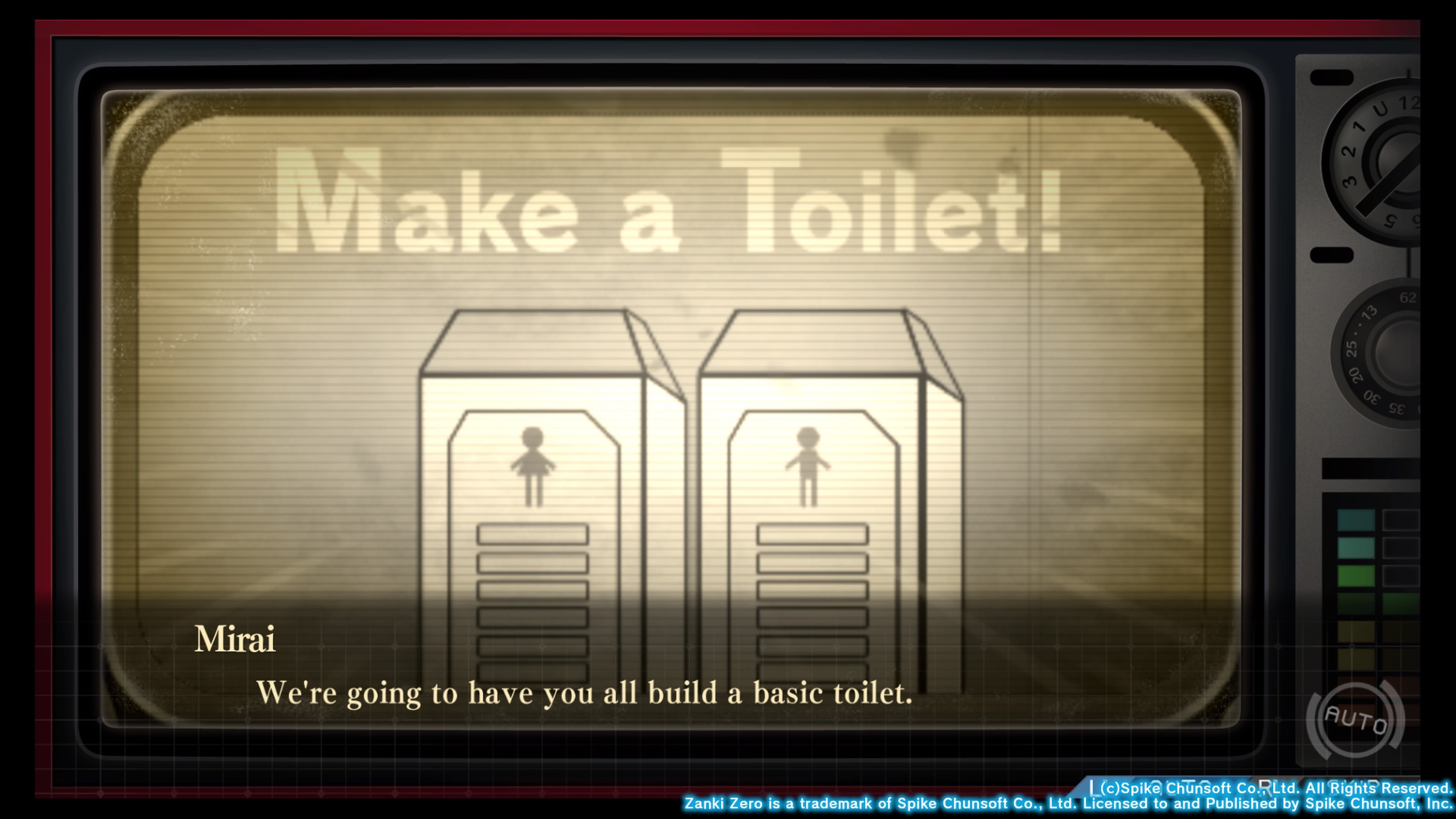 Besides exploration, there are a host of classic-style survival mechanics to worry about. On the normal and higher difficulties, steadily declining hunger, thirst, and bladder meters force the party to swap out regularly to give the others time to eat, drink, and use the toilet. Ingredients for crafting equipment, cooking food supplies, and building improvements to the home base are scattered throughout the island and ruins, and lots of exploration and combat is needed to gather up everything required to ease the grind.

Working to ease the grind can be important, because without it, the combat in Zanki Zero largely fails to engage. Rather than settle for a more traditional turn-based combat system, Zanki Zero keeps it simple…by making everything real-time. Players will strafe and hop their party about on the grid-style map, dodging attacks and charging their own in an attempt to kill various monsters and bosses infesting Garage Island’s environments. Despite the addition of various weapons and more exotic equipment types (with their own risks and rewards), the combat never grows in complexity beyond the rote “dodge, charge, and target weak spots” pattern, and combat really only gets difficult when hemmed in by narrow corridors or facing more than a couple of enemies simultaneously.

Having somewhat mundane mechanics isn’t all bad, but it’s telling that the game effectively makes them optional through its difficulty settings. The lowest difficulty level all but removes the need for combat or even survival maintenance, allowing players to treat the experience as the equivalent to a Danganronpa-style adventure game rather than an RPG. I’d normally be quite impressed that the devs were bold enough to allow that choice from the get go (the minimum difficulty was a post-launch addition in Japan), but that the game, through its narrative, can still feel complete and satisfying at this difficulty level (which can be toggled on and off at will) speaks to how little the story and mechanics actually mesh. Most times, Zanki Zero feels like two or even three different games welded together and never gelling into a united whole.

Considering that I’ve never been all that fond of traditional dungeon-crawlers myself, I found the path of least resistance all too tempting to take, and regularly bopped the difficulty down to no apparent consequences. Sure, that helped me finish, but I’d have liked Zanki Zero to make a case for me to start getting interested in its style of play, rather than allowing me to just opt out of engaging except when professionally obligated to do so.

In the end, Zanki Zero: Last Beginning is a credible and entertaining adventure, but its potential to stand alongside its developers’ best works is hampered by its systems and story’s inability to come together and elevate the experience beyond the sum of its parts.