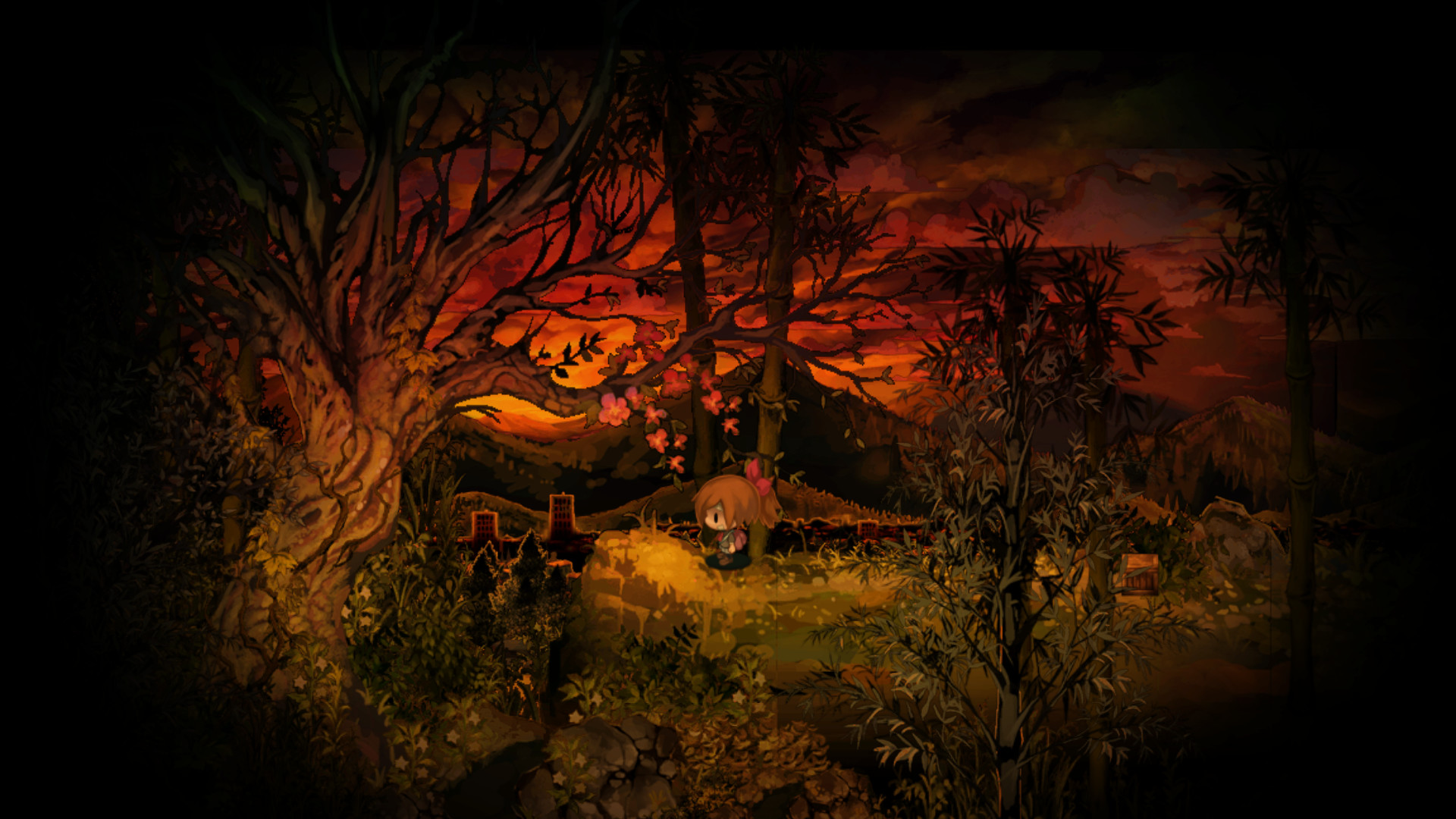 A beautiful tale of friendship and death

Yomawari: Midnight Shadows begins with a simple instruction: “Focus only on this screen. From this point on, do not divert your eyes from this screen.” My initial response was something like, “Suuuuure, okay, game.” Six hours later, I realized I never did look away from the screen. Yomawari is undoubtedly horror-filled, but both Night Alone and Midnight Shadows are beautiful to look at, with gameplay that’s so engrossing I felt the need to focus on every detail.

Like its predecessor, Midnight Shadows begins with a morbid shock. Within the first few minutes, you’re given a clear indication of what you’re in for. Nippon Ichi has delivered another isometric horror adventure that’s equal parts gruesome and lovely.

This is a new story rather than a continuation of the previous game, but it still involves chibi girls and cute doggos. You play as Haru, who’s looking for her missing best bud Yui. The night is dark and the town is filled with terrifying ghosts, but she’s determined to find Yui anyway. Armed with her trusty flashlight and a few pebbles, she sets out into the *spooky voice* midnight shadows.

Sound plays an important role in both Yomawari games. The soundtrack is practically nonexistent, which is the perfect setup for scares involving ghost shrieks or other sudden loud noises. The silence is punctuated by nighttime sounds — the chirps of insects, the hum of streetlights, the soft mews of stray cats, the crunch of leaves underfoot — and these little audial details add so much to the atmosphere. Mostly, though, you hear Haru’s heartbeat as if it were your own echoing in your ears. If a ghost is nearby, Haru’s heart will begin to beat. The closer you get to it, the faster her heart beats until you finally spot it with your flashlight. Then you must decide how to get around it or escape if it gives chase.

Escaping involves figuring out how each different ghost works and utilizing your surroundings. Sometimes you need to run, prompting Haru’s run meter to deplete as she sweats and panics. Other times you’ll hide behind bushes or signs, waiting for your pounding heart to subside as the ghost floats away. You’ll pick up random items that you can use as distractions for some spirits, allowing you to sneak past them. Some will simply block your path, forcing you to retrace your steps.

Each new chapter is separated by a brief sequence in which you play as Yui, giving an indication of where she’s located before switching back to Haru in her room preparing to continue her search. Upon leaving Haru’s house, you’re given a new location to head toward, but some areas will be blocked off by obstacles, enormous ghosts, or enemies that are too strong to tackle. You must determine the correct route, filling in more of the map as you go, while making your way past a variety of apparitions. You’ll run into some light puzzles, and collectibles are scattered throughout the town. I really enjoyed the descriptions of the collectibles and the mystery behind who dropped them, adding to the cute but menacing air the game has perfected.

One of my favorite things about both Yomawari games, and half the reason I can’t divert my eyes, is the creative ghost designs. I was fascinated by all the different beings I encountered and the ways they tried to impede my progress. Whether it’s a seemingly harmless spectral boy chasing his ball into the street, a shrieking Ringu-esque girl dropping into your path, or a giant creature chasing you with a pair of scissors, every spirit is imaginatively designed and executed.

Atmospheric visuals add another layer of engagement to the game. Midnight Shadows lives up to its name by playing on real-life irrational fears, such as the idea that walking too close to a manhole cover could lead to a hand popping out and grabbing your ankle. I was exploring an overgrown area when a spiderweb popped up onscreen as though I had walked through it, hindering my ability to see for a bit as my heart rate increased. Visuals and audio combine to create an experience that is both eerie and fun — this is a game filled with dichotomies.

Although Midnight Shadows is more polished than Night Alone in most respects, its save system is a bit of a joke. You’ll find coins scattered throughout town, which you can then use at shrines to save your progress. I never had trouble finding coins, I was always holding the max amount of them, and some were even lying right next to the shrines. Once I got used to the town’s layout, I rarely felt like there was any risk involved in taking a previously unexplored path because I could save often and keep all my items if I died. This only added to the annoyance of retracing my steps rather than making each resurrection at a shrine a fresh challenge. Those issues knock a few points off an otherwise brilliant little game with about six to eight solid hours of palpable tension.