YIIK: A Postmodern RPG is, as the title implies, a turn-based RPG that centers around a group of hipsters from the year 1999. A lot of its presentation is based around a mixture of 90s nostalgia and attempts to subvert genre conventions by subtly deviating from the norm in some fairly interesting ways.

The star of the show is a whiny brat named Alex. He has recently returned home after finishing college, and he’s now living with his mother while he “tries” to find a job. After following a cat into an abandoned building, he meets a mysterious young woman who is almost immediately abducted by some creepy, hooded supernatural beings. From here on out, Alex is obsessed with this woman and, with the help of some friendly locals, spends the next 20 to 30 hours attempting to rescue her.

The setup is, intentionally, vague but more or less serves its purpose of getting things going. Unfortunately, the main character, Alex, is an insufferable jerk. From a narrative standpoint, his personality works. From a player perspective, it makes the experience incredibly torturous. Even after the closing credits, I fucking hated this guy. 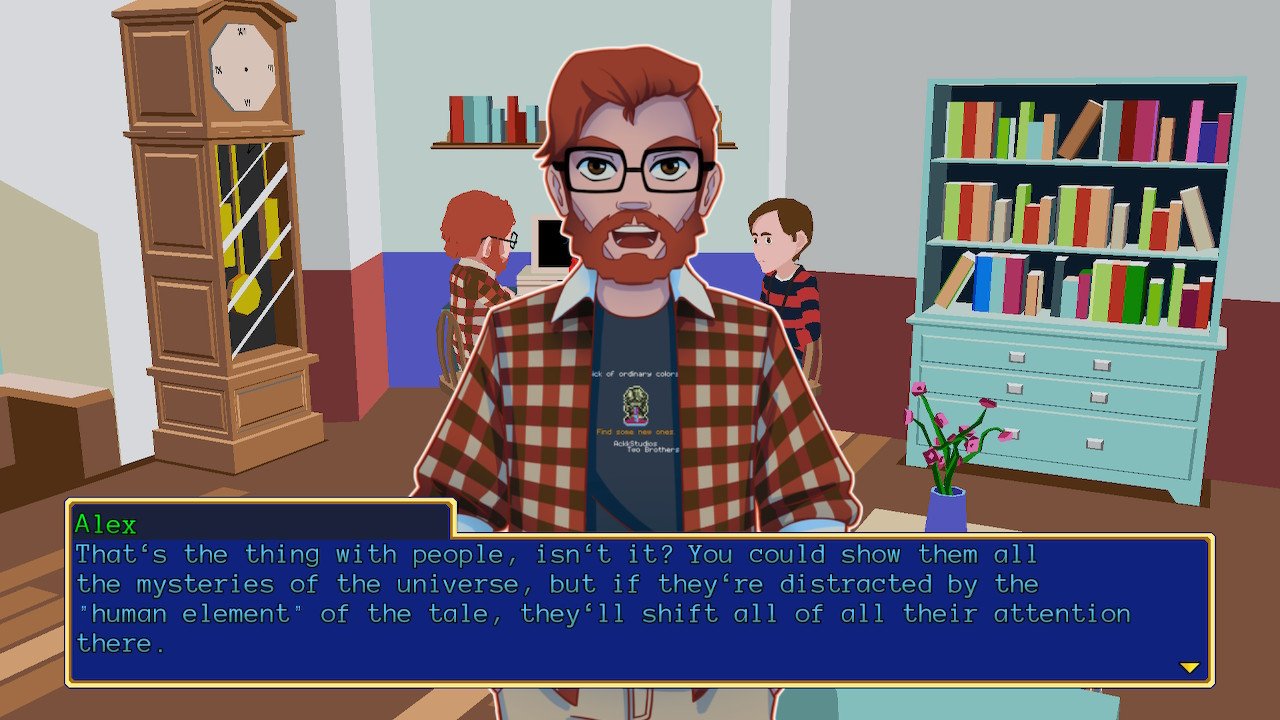 There’s a huge disconnect, especially in the opening hours, between how Alex presents himself through spoken dialogue with other characters and the inner thoughts we’re also forced to endure. He pulls the whole “turns to camera and monologues for a few minutes” routine a lot. This is a person who loves to hear himself talk. Regardless of who he’s addressing, he always sounds like a self-absorbed brat. At no point during this journey did I feel otherwise. This isn’t someone I’d want to spend fifteen minutes with, let alone over two dozen hours.

If done correctly, however, this approach to an unlikable protagonist could have worked, but the story itself falls short as well, and the vast majority of supporting characters fall victim to the same cringey, cliché-filled dialogue. I have worn Chuck Taylors for over a decade, collect vinyl records, love artsy fartsy shit, and most folks would consider me to be a total hipster through and through. I am probably the exact target demographic for the sort of topics YIIK attempts to tackle, but it just never felt authentic and a lot of the efforts to cater to this crowd came across as extremely forced.

The gameplay is fairly straightforward RPG territory with dungeons, towns, and turn-based combat, but it borrows the action-based minigame stuff popularized by Super Mario RPG. You’ll select an attack from the menu, follow the prompts, and the damage dealt is determined by how accurate you were. Frustratingly, a lot of the time sensitive actions involving moving bars and rhythm-oriented button inputs will skip and stutter. This leads to a lot of cases where you’ll fail to execute an attack through no fault of your own. Luckily, this isn’t even a remotely difficult game, so it won’t be too much of an issue, but it’s still obnoxious when it occurs.

On the other hand, this does lead to longer, drawn out battles which feel like they don’t fully respect your time as a player. Even small encounters can end up dragging on much longer than they should, given the relative ease of difficulty. This isn’t an issue strictly confined to combat either. The item menu is legitimately awful and presents everything in one giant list that you’ll have to scroll through every single time. Usable items, weapons, and gear are all dumped in one giant batch when you click on the items category, despite the fact that you can’t even actually equip the weapons or armor during fights. This could have easily been remedied by implementing sub-menus that could be toggled with the left and right shoulder buttons.

Another perfect example of this annoyance is Alex’s “Panda Barrier” skill, which deploys his fluffy panda companion to block incoming attacks. After selecting it, the game notifies you of each individual party member that it’s protecting separately, which takes roughly five seconds. I never encountered a single instance where a party member wasn’t protected during this animation. A simple, “Panda is protecting the party” message would have sufficed and done a much better job of getting me back into the action.

YIIK‘s greatest contribution to the RPG genre is The Mind Dungeon — a spin on a simple system for leveling up your character. But, it’s not without its faults. Accessed via save stations, each level costs 100 XP to unlock and then you can select which attributes you want to upgrade. This is done by assigning them to different doorways and then entering those doors. I liked it at first purely due to the virtue of never having experienced a system quite like it before. Although, once the novelty wore off, it ended up proving itself to be yet another needlessly obtuse mechanic that doesn’t really do enough to feel like a valuable distraction. 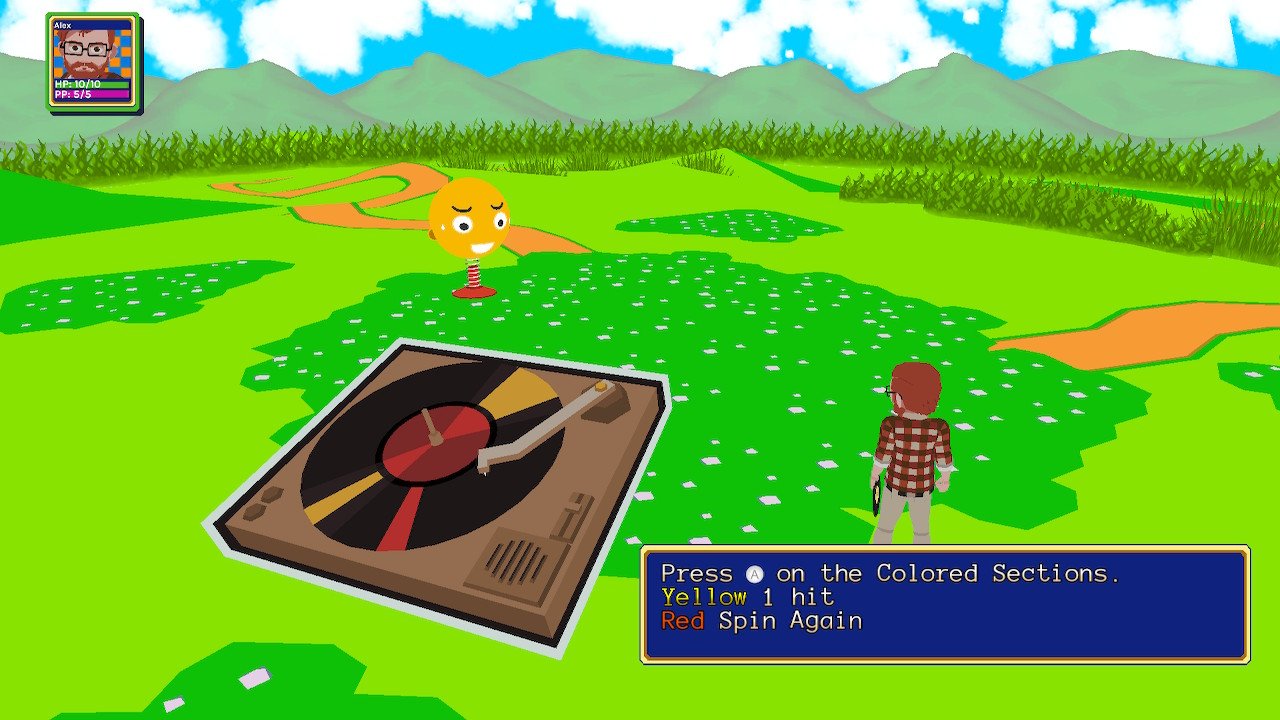 The biggest offender is most definitely the save screen, which feels much more archaic and sluggish than it actually is. You have to sit through a few animations every single time you save. If you’re anything like me when I play RPGs, that’s pretty goddamn often. Specifically, there’s a pointless little message at the end that says something along the lines of “call again sometime…” that adds nothing of value and only further keeps players away from, ya know, playing the game. It’s such a small thing, but it irritated the hell out of me.

These are just a few of the many, many instances where I couldn’t help but feel like my time wasn’t being respected. Taken outside of each other, they don’t hurt the experience much. When you are constantly encountering all of these tiny annoyances back-to-back in regular succession, the effect is felt much more profoundly. It really kills the momentum.

It’s not all bad, though. The artwork and background designs for the more psychedelic areas are gorgeous. There’s also a dungeon involving an interdimensional robot that is genuinely outstanding. It involved creative problem solving and delves into some pretty far out there setpieces. I loved this section. It, weirdly, does almost every single thing right, and I couldn’t help but wonder why the rest of the game didn’t play to these same strengths. YIIK is at its best when it’s not trying to be funny or quirky and just goes all out mindfuck with a serious face.

There’s a fantastic game buried somewhere here, but its merits are clouded by a plethora of bad design choices, uneven writing, and a protagonist who nobody in their right mind would ever want to spend any time with. There is one specific dungeon and a handful of other standout moments which perfectly exemplify how this approach to abstract storytelling could thrive in video games. Unfortunately, YIIK ultimately fails to deliver in its execution, and it’s difficult to recommend for anyone that isn’t willing to sit through 25 hours of drudgery for a few hours of psychedelic brilliance.