First-person shooters are a dime a dozen, but recently this genre has seen an influx of score-oriented types of gameplay. From Bulletstorm to Bodycount, it is no longer enough to just give the player some guns, a few levels, a story, and hope your game will sell some copies to people who aren’t already playing Call of Duty.

Xotic fits this new trend, but while it is an FPS that is all about scoring big, it shares more similarities with a shoot-’em-up such as Ikaruga than a narratively driven shooter like Bulletstorm. 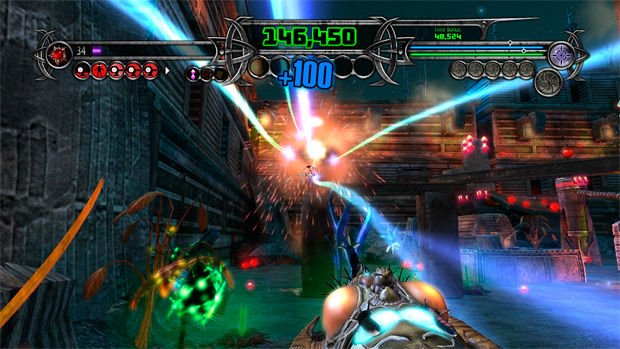 Players who are expecting the usual FPS trappings of traversing from level to level, progressing through a story, and spending most of their time exploring and shooting at enemies can forget about all of that in Xotic. There is a story, told through a few cutscenes, that sounds like it was written by someone who was on some quality drugs. There are enemies that need to be dispatched in order to “clear” a level. But while the story and enemy design evoke the madness of Zeno Clash to a degree, they are both secondary to the game’s exotic level design.

Everything in Xotic revolves around attaining as high a score as you possibly can. Even though you might start out just screwing around and shooting at everything you see, it doesn’t take long until you realize that there are certain ways to get a higher score and more efficient paths through a level to get you there. 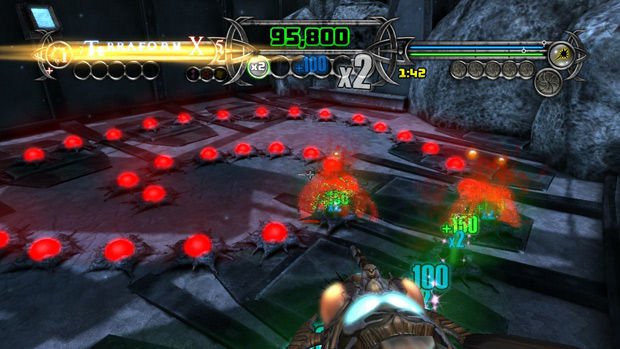 Each level contains batches and lines of red blobs called “scabs” that, when shot, explode in sequence to keep a “terraforming” chain bar going. The longer you keep this bar from dropping to zero by shooting other scabs, the higher your chain multiplier and the higher your eventual score will be. Do all of this in as little time as possible, and a nice time bonus will await you at the final tally.

Because this in itself would make for a pretty boring game, levels are littered with crystals for points, enemies, modifier pick-ups and “brains” that can be shot for a lot of points. The downside is that all these things put together will make you divert your attention from the shortest and most efficient path. When you jump through a batch of crystals, you get an “aerial combo” bonus. But perhaps you should have timed that jump only after clearing a section in run-up to it, and perhaps you should have landed the jump in question to go straight into another jump, shooting a few scabs along the way to keep the terraforming chain going.

This makes the enemies more of a nuisance to obstruct your optimal score than the sole purpose of completing a level. You do need to kill all of them to open a portal that lets you exit and finish a level, but in terms of gameplay, enemies are simply there to distract you. It’s a good thing too, because while the enemy AI is pretty basic, it tends to focus on walking backwards and behind cover so you’ll have to actively chase and kill your foes — costing you valuable time in the process. 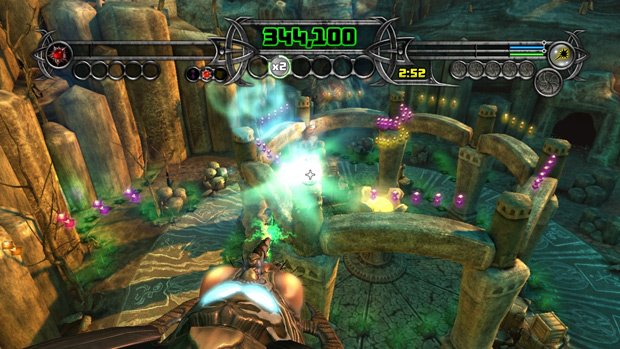 As levels become increasingly large and complex, suffice it to say that those who want to keep improving their scores and staying on top of the leaderboards will have plenty to do in Xotic. You might be able to run through all the levels once in under three hours, but that would be missing the point of the game entirely.

This is a game that wants you to explore a level, to learn where the enemies are and how to shoot them on the run, to memorize where x2 and x3 score multipliers can be found, and to fine-tune your best path through all the crystals in a level while simultaneously shooting scabs to chain them into one giant combo.

As such, you can look at it as a type of Ikaruga, with its enemy pattern memorization and the training required to place shots exactly where they need to be, and nowhere else — but with Quake III controls and first-person gameplay. It also means that if you’re looking for a shooter with a campaign to blast through for a few hours of fun, so you can complete it before moving on to the next game, you should probably look elsewhere. 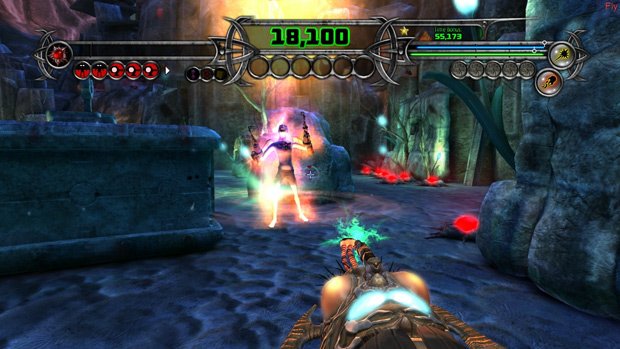 Although Xotic might best be described as a shmup with a first-person perspective, it does lack the wider appeal of its genre cousins. You can play any shmup for a few minutes until you die, accept that you suck at it, but still have fun in the meantime. Doing so in Xotic still offers plenty of fun, but it’s not much of a pick-up-and-play game — although it boots up very quickly and runs well on a lower mid-range PC. There are weapons to unlock and level up, but once you have found the primary and secondary weapons that work for you there’s little reason to use most of the other ones.

If you are the kind of person that didn’t play Quake III Arena for casual fun, but competitively with all the weapon and armor spawn locations hardwired into your brain, then Xotic offers a huge amount of challenge to spend hours upon hours with. Many levels even require you to plan vertically as well as horizontally, by means of “hard holograms” that can be projected to act as shields or mid-air platforms; before long you’re placing holograms below you as if you’re doing rocket jumps. Unfortunately these holograms can also sometimes get you stuck inside of them if you place them like an idiot — something I found all too easy to do with my spastic keyboard claws.

Despite being a PC game for now, it’s clear that Xotic is also developed as an Xbox Live Arcade title. Your Steam ID is called a Gamertag, the menus mirror those of a typical XBLA game, and only graphics option is brightness control. This doesn’t really detract from the in-game experience, though, and you’re probably better off with the mouse and keyboard twitch controls than using a gamepad if you are serious about getting that #1 spot on the leaderboards in the PC version. The lack of graphics option are not a big issue either, since the game looks good, runs smooth, and adjusts to your desktop resolution.

While a small bug may pop up here and there, and it can to be a bit hard to notice when you are close to dying, the core game is a largely fluid and polished experience.

Xotic demands a certain competitive mindset to fully enjoy it, to be sure, but for those who want to test their first-person skills with the type of score-based arcade gameplay that is usually found in other genres, it does what it sets out to do and it does so successfully without overwhelming the player.