The X series is known for being a little rough out of the gate, so when X Rebirth came out with some major bugs, no one was really surprised. Egosoft has been releasing a lot of patches, but the game is still borderline unplayable. It’s more than just a few weird glitches or flaws — nothing in X Rebirth feels ready to be played.

Beyond just being glitchy, the core gameplay mechanics are flawed. The menu systems are hard to navigate, it’s hard to know what you should be doing or what you can do, doing a simple task is an exercise in patience, and I always felt like I was fighting the game’s mechanics to get anything done.

There is some good stuff in here, but anything worth playing in X Rebirth was done better by X3: Terran Conflict. X Rebirth was supposed to be a new starting point for the series, a game to bring in new players while keeping the old spirit alive. Instead, we have a game that scares away newcomers and upsets fans of the series.

Not really a winner in my book. 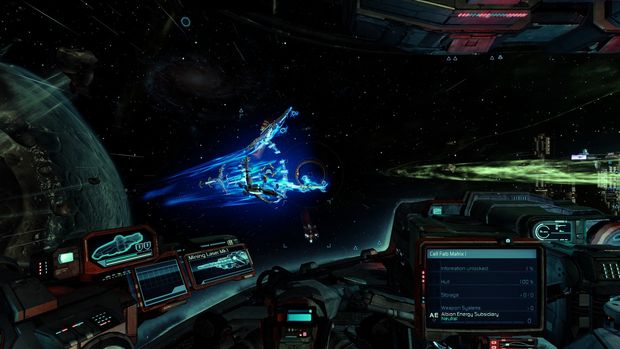 X Rebirth is an open-ended space exploration game, where you can trade, build stations, command a fleet, engage in dogfights, and become a space-faring mogul who rules over the galaxy. It’s a follow-up to the classic X series, which begin in 1999 with X: Beyond the Frontier. It has long been known to be an amazing sandbox series, which usually contains flaws that the community later fixes with mods. The newest games are difficult to get into, and they have a very steep learning curve. X Rebirth was hoping to provide a good starting point for newcomers to the series by adding in station interiors, new trade systems, better ways to quickly move around space, and a handful of other features that no one really seemed to want. There are already mods out from fans to remove most of these features, or overhaul them completely, so that tells you how the changes went over with fans.

The first thing you will notice, is that this game runs like a one-legged horse trying to win the Kentucky Derby. And the hilarious thing is that the better your machine is, the worse it could run. Egosoft has come out in the forums saying it didn’t really test the game for high-end systems. My machine is decent, despite being a bit dated, and I was constantly dropping down into single-digit frames per second. At best I would get 20 FPS, and that didn’t happen very often. On top of bad frame rates, there is constant pausing and stuttering when you leave your ship, enter a highway, or just randomly because the game hates you.

Since it runs so poorly, you would think that this is a graphically impressive game with cutting-edge technology and effects, but it’s not. It looks good, and everything is highly detailed, but there is nothing going on to warrant the appalling frame rates. The ship designs are fantastic, and the station exteriors are highly detailed. Flying near a capital ship to destroy its engines reveals how detailed all of the ships are up close, and it’s always nice looking when the ships explode into giant balls of fire. I had this amazing moment where I docked my ship in a larger ship during a battle to try to repair my guns, and when I stepped off my ship I could still see the battle happening around me when I looked up.

While everything in space looks nice, once you see another character or walk inside a station, you’re met with horrible graphics and some bizarre design choices, like having your sidekick’s armor have a window for her cleavage, and almost every station has a strip club with freakish looking holo-dancers and posters of crudely-drawn butts.

All the characters in the game are poorly animated with bad textures. They look like humanoid robots that were rejected because they scared away children with their twitching and inhuman motions. There are only a dozen or so different character models, and they are repeated over and over again, and they usually have a voice coming out of them that doesn’t match the face. When you talk to them they usually contort their necks into an uncomfortable position and stare at you with empty eyes that are fixated on something that isn’t you. 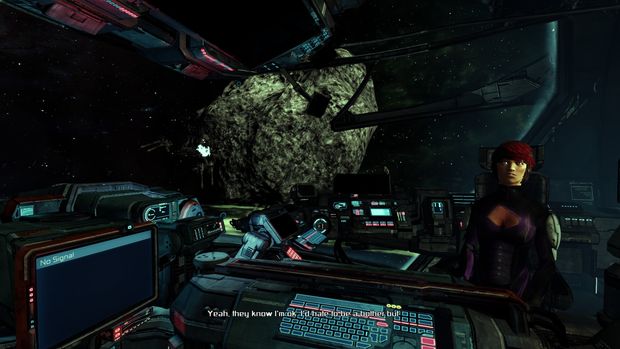 The interface is a complete mess, and doing anything requires a lot of unnecessary steps. Even selecting menu items requires a double-click most of the time, which is really cumbersome. While flying your ship half the screen is obscured by the ship’s consoles, which have very little useful information on them. You also can’t freely look around the cockpit, meaning you have to turn the ship if you want to see what’s around you. Flight sims in the ’90s had better cockpit controls — at least give me a key to press to look out the side windows. 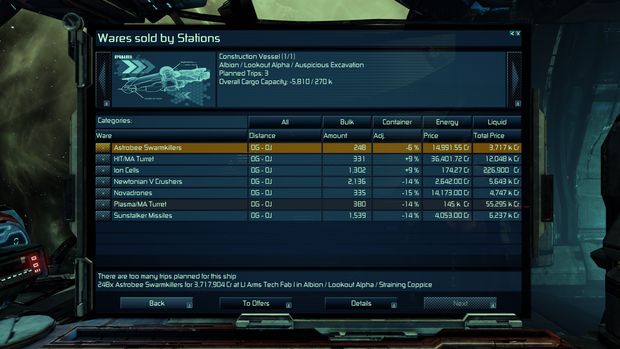 To make the awful interface even worse, the game makes no attempt to explain to you how you should do things — I had to read forums and watch YouTube tutorials to understand how to play X Rebirth. It wasn’t just that I didn’t know how to do something, most of the time I didn’t know what I needed to do. There is no sense of direction, and I usually had no idea what I was supposed to be doing. I never felt like I could go off and do anything I wanted to do, which is the main reason to play a sandbox game. Space games are about exploration, but it’s hard to explore when I don’t know what I am looking for.

I had a hard time getting my ships to jump, because they would call me up and say they were out of fuel. After hunting around on a forum I learned that you have to click on the captain’s picture when he calls you to tell them to refuel. This is the only instance in the game where clicking on a portrait brings up a menu, and the game never explains the concept. I still don’t grasp it fully, but I was able to finally get my ships to fly.

There are two modes to the game: a campaign with a loose story to guide you, and a freeplay mode where you just venture out and do what you want. The freeplay mode is much better, since the story is garbage, but it does nothing to try to teach you how to play. This game isn’t for newcomers to the series, no matter what Egosoft is saying. You will have to spend hours researching if you want to understand things, and even then you’ll still often find yourself confused. 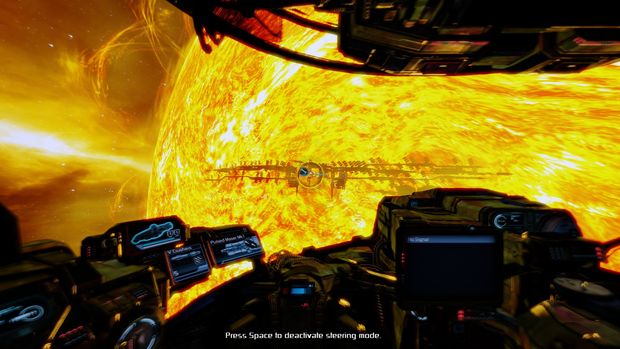 You will always fly one ship, which is a departure from previous games where you could buy new ships for yourself. Flying it is insanely awkward, since the controls are really off. Close your eyes, and imagine playing a good flight sim. Now picture something different, and you are playing X Rebirth. There isn’t a sense of momentum when flying, and turns are always too loose or too tight. The ship accelerates and brakes too fast, and I felt like I was flying a paper airplane around. It’s similar to playing a first-person shooter and feeling like a floating camera instead of a person.

While the player is limited to the same ship, you can still build up a fleet by buying or capturing other ships. These ships can be ordered to follow you around, engage in trade routes, or build space stations for you to rule the galaxy from. Fleet battles look great, and it’s fun to watch two giant capital ships go at it while you zip around taking out engines and turrets. Ordering your fleet around suffers from the bad interface, but once you have them in a group you don’t have to mess with them too much to keep them following you. 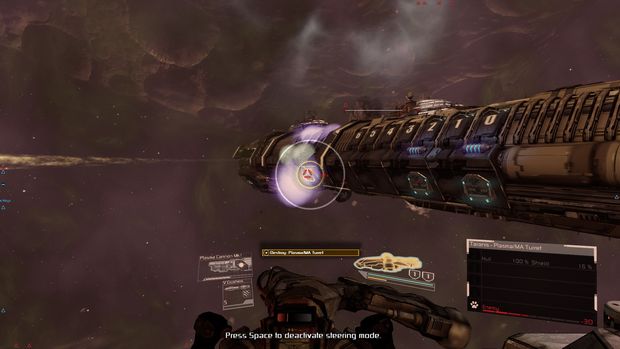 The new features in X Rebirth are highways to travel faster, the ability to scan stations to gather information, the ability to leave your ship and walk around, and a new way of trading goods. All of these additions are garbage and I am not even going to bother explaining them, since like I said before they have already been removed or overhauled by mods. Egosoft thought it knew what people would like to see, but fans just want the core features they have always loved about the series.

The community has stepped up big time to try to fix up this half-baked game, and there are already a handful of mods out there. Some of them are almost needed to even play X Rebirth. The series is known for its mod support, and you can really change the game for the better with them. It really sucks that the game is so rough that fans are already overhauling the gameplay and graphics, but it is nice to see such support so early on. Ultimately, the modding community could save this game. 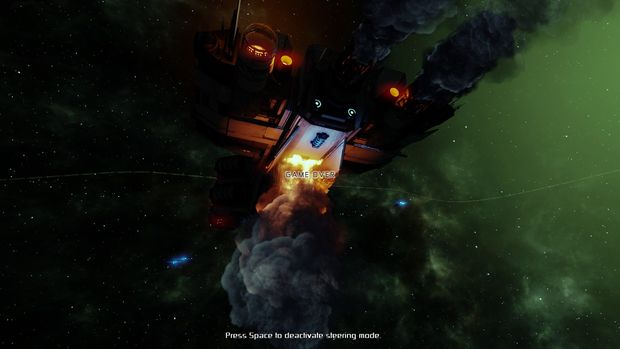 At its core, X Rebirth is an ambitious game. It’s a giant sandbox that offers the player a lot of freedom to go out and do anything, but it’s just not ready to play. It’s a sandbox filled with turds, and I can’t recommend it in its current state. There are some good base assets in the game, and maybe after a year of patches from the developer and mods from the community, this could become something worth playing. Egosoft is usually good about patching its games, but that doesn’t excuse the studio from releasing something that’s this fundamentally broken.

X Rebirth might be worth grabbing in a Steam sale in a couple of years, after 100 patches and with a dozens of mods that create an entirely different game. That game could be fun if you are into modding. As it is right now at launch, X Rebirth is simply a broken, flawed, and almost unplayable mess. It’s a shell that has potential, but it’s not a working game on its own. Stay far away from it for now, and maybe in a few years it could be worth the time of dedicated fans.