As someone who grew up in the ’80s, I have fond memories of these rubber WWF toys that I’d ricochet all over my house. Drop Hulk Hogan on his rubbery toes in just the right place and he’d spring forward, smashing face-first into an unsuspecting “Macho Man” Randy Savage. Savage would return the favor, and then I’d tumble them around in the air, textbook wrestling moves amped up to a thousand by my overactive child mind.

It was pretty awesome.

With WWE All-Stars, THQ has managed to successfully translate that childhood rush into a videogame.

I think it’s pretty awesome, too. 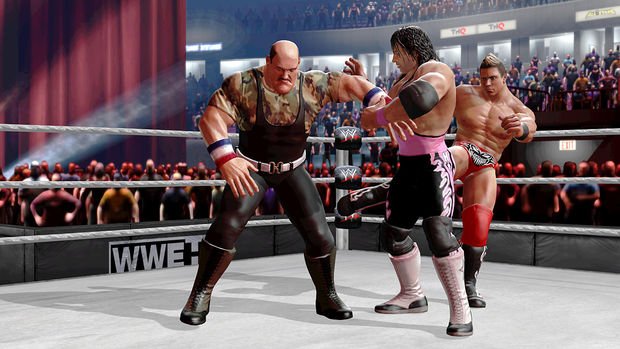 I’m about to say something that, depending on the era in which you grew up playing videogames and the kind of gamer you are, may have you foaming at the mouth: WWE All-Stars is a bit like a mash-up between NBA Jam and AKI’s incredible Nintendo 64 wrestling titles.

The NBA Jam bit certainly makes some sense — Sal DiVita, along with many former Midway folks who now work for THQ San Diego, were instrumental in bringing NBA Jam to the market in the ’90s. We’re talking about a team of individuals who specialize in accessible, fast-paced, quarter-munching game experiences. (This also isn’t DiVita’s first time working with the WWE; he worked on 1995’s now-classic WWF WrestleMania: The Arcade Game.)

WWE All-Stars is all about action, from bell to bell. It doesn’t give you more than a few seconds to breathe, whether you’re opening up a can of whoop-ass or you’re on the business end of a Tombstone Piledriver. And it’s some of the craziest, most over-the-top action you’ve ever seen in a wrestling game. Superstars effortlessly toss one another across the ring like rag dolls, sometimes from one end to the other. I was quite literally giggling with delight as I performed Mr. Perfect’s WWE All-Star Perfect-Plex for the first time — he spins backwards numerous times through the air before slamming the poor superstar on the receiving end into the mat. The on-screen action is preposterous — we all know pro wrestling is “fake,” but it’s at least grounded in the laws of physics — but that’s half the fun of WWE All-Stars. 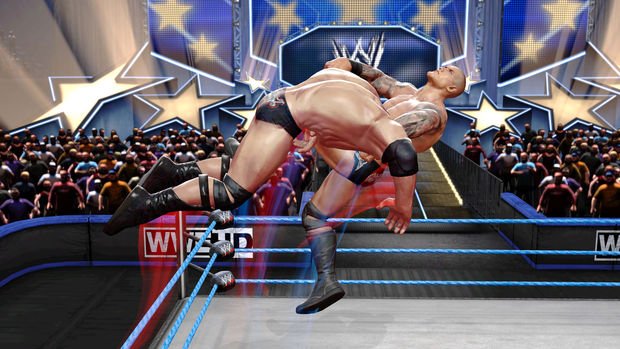 From a gameplay standpoint, All-Stars is immediately more approachable than THQ’s SmackDown vs. Raw series, which has arguably become an overly convoluted mess. Here you’ve got light grapples on one button, and can perform a series of moves with the simple tap of any other. You can even move the analog stick to change your wrestler’s position and perform a whole new set of moves from that new lock-up situation. There’s also a strong grapple, which your wrestler will reach for at a reduced speed, but the payoff is a more destructive assortment of moves.

You’ll have melee attacks at your disposal, ranging from quick strikes to slower, more powerful heavy attacks. With fast-paced combat in mind, WWE All-Stars encourages chaining these attacks together with one another, as well as with the game’s grapples. The most basic might be something like two light punches followed quickly by the grapple button, which will make your wrestler launch right into a takedown. Again, it’s all about keeping the match moving, and knowing the right combinations of moves to string together is the key to success.

You can also juggle opponents with strikes. Yes, “juggle,” as in Tekken-style air juggles. Most wrestlers have a few moves in their arsenal that, if used in the right way, can pop your opponent into the air. Once off the ground, you can follow up with a series of well-timed strikes or even grab them out of the air for a devastating move that will send them crashing to the ground. Many characters can even string together these pop-up moves for a wild sequence of classic pro wrestling attacks. 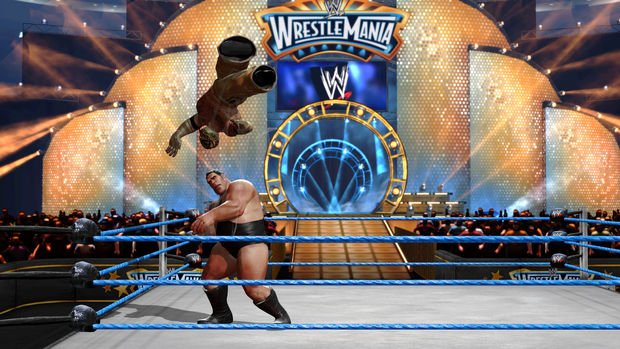 Because no in-game combo list exists (something has to get you interested in that Prima strategy guide, right?), there’s a lot of experimentation involved here. Fortunately, many of the combo strings are easy to discover, and most players will naturally find them over the course of a few matches. And although many seasoned gamers might see it as a weakness, most of the combos translate from wrestler to wrestler. Perhaps adding more variations would have gone a long way in making All-Stars a deeper fighter with a more difficult-to-master roster. But on the flip side, the game’s accessibility is one of its biggest strengths, and I think THQ got this one just right.

WWE All-Stars also applies a similar blocking and reversal system to that found in AKI’s popular Nintendo 64 wrestling titles. Carefully timed shoulder-button taps will reverse holds, and it’s even possible to reverse the reversals if timed properly. For every move that can be reversed, a reasonably large icon appears near your wrestler’s HUD to let you know when in the animation the reversal can be performed. This kind of feedback goes a long way toward cutting down the habit of “reversal button mashing” that a lot of folks fall into while playing many wrestling games. While you might get lucky, knowing the timing for each animation will greatly help you both frustrate an opponent and subsequently win a match-up.

The ultimate goal is to wear down your opponent with all of these tools, while at the same time building up meters to pull off your signature moves and, when all is said and done, your finisher. Up to three signature moves can be banked at a time, and they’re usually hyper-stylized versions of attacks you’d normally associate with that particular superstar. The “finisher” meter takes a bit more time to build up, but is the ultimate show-stopper. While you can pin opponents for the win, if an opponent’s health meter is drained to the point where it’s blinking red, one finisher will result in a KO. We’re talking a lights-out, automatic victory. 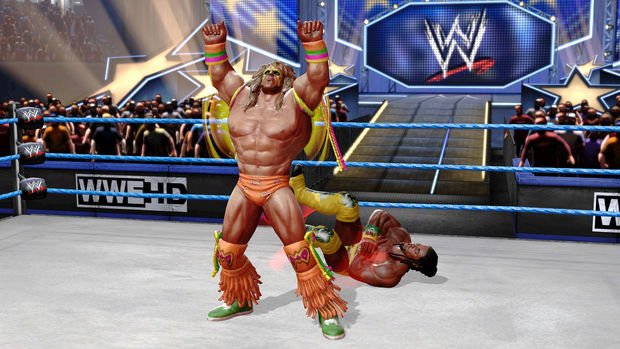 Finishers and specials build up relatively quickly, too, particularly if you’re competently landing a wide variety of moves. There aren’t any matches that really last longer than a few minutes. Two skilled players could theoretically go back and forth in a game of cat and mouse, but whoever can land that finisher first usually has a good chance of hearing their name called after the bell.

These signature moves and finishers are the few attacks that can’t be reversed, which I found to be a bit frustrating. Yes, it takes timing to pull off most of the moves. And because most of the signatures and finishers start with slow grapple animations, it’s possible for an opponent to evade or interrupt them with an attack. But once you’re caught in the animations, there’s simply nothing you can do. It would have been nice if you could reverse a finisher to avoid a certain loss with a combination of careful timing and use of your banked finisher or signature move. One has to assume that the developers carefully looked at their options, and decided it was in the game’s best interest to leave that out. Still, while I like the quickness and arcade-style brevity of the matches, I think those kind of last-minute “oh, damn!” finisher/signature reversals might have gone a long way in adding an extra dash of drama to matches. Regardless, what’s here is absolutely a joy to play — to an extent because it all comes together in such a ridiculously over-the-top manner, but mostly because it just feels so smooth.

WWE All-Stars also offers up a few ways to unleash your aggression while no one else is around, including “Path of Champions” and “Fantasy Warfare.” There are three “Path of Champions” scenarios, each of which “tells a story” through entertaining in-game cut-scenes as you work your way through the ten matches of the mode. This is pretty basic stuff, and doesn’t change regardless of your character choice. The latter matches of each path can also get progressively frustrating on even the game’s default difficulty, as the game tends to stack the AI deck against you. One particularly memorable cage match had Hulk Hogan reversing nearly every grapple attack and strike I dished out. When it came time to escape the cage, inhuman Toshiyuki Takahashi-style button mashing was definitely going on behind-the-scenes. And outside of Achievements and Trophies attached to completing them with various characters, there’s not much replay value here. Still, it’s a good way to get your footing while learning gameplay beyond the basics. 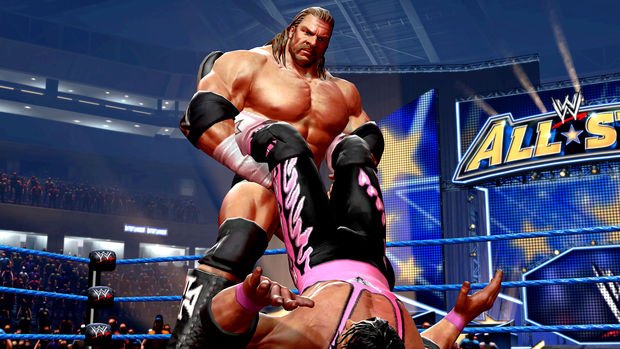 The same can be said for “Fantasy Warfare,” a series of “what if?” (and a few “remember when?”) matches between current WWE Superstars and past Legends. In this case, though, THQ was sneaky, tying these matches to significant game unlocks. You can choose whichever wrestler you want for each match; in some cases, choosing the right character and winning will unlock that character for other game modes. Each match-up also features an entertaining and well-produced intro video that wrestling fans are sure to eat up. Despite the incentive to play through them and the slick fan service, it’s a fairly straightforward way to present the game to folks playing alone. While that does sort of fit the game’s arcade vibe, a deeper career mode would have been a nice touch.

As a staple of THQ’s WWE games, a “Create-a-Superstar” mode is included in All-Stars. It’s nice to be able to craft your own fighter, although this is probably the most basic we’ve seen the mode in a WWE game in some time. There’s plenty you can do appearance-wise, but moves can only be assigned in sets based on characters already on the disc. You can choose your finishing move, but taking away the ability to customize the entire move set undercuts the experience a bit. Part of the problem comes from the fact that the on-disc roster is so incredible that there’s little chance anything you make will be able to stand toe-to-toe with these greats.

Those gripes aside, WWE All-Stars really shines when you’re battling it out against other players. The number of exhibition game modes isn’t mind-blowing (the most interesting being a one-on-one steel-cage match), but there’s enough to keep the party rolling. While I wasn’t able to try them out before the game’s official launch, online battles are also supported. From what I can tell, the options here are pretty basic. There’s no way, for example, to create a “round-robin” game room that might mimic arcade or couch play. A handful of friends could maybe join an Xbox Live party and then hop in and out of games, but spectating on and sizing up your competition is sometimes half the fun. 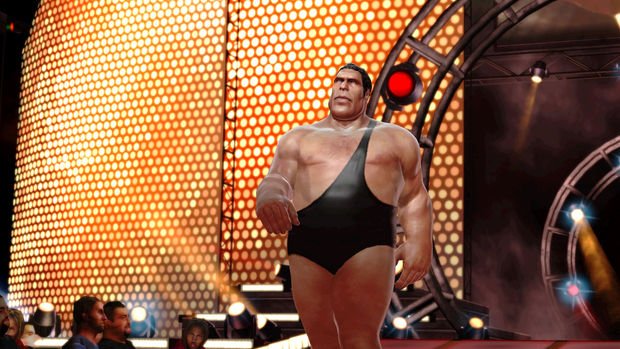 Folks who don’t play sports games (or even watch sports!) will drop everything to get in on a game of NBA Jam, thanks to its quick pace and easy-to-comprehend gameplay. In that respect, maybe WWE All-Stars is the NBA Jam of wrestling games that gamers never knew they wanted. Which, when you think about it like that, is pretty awesome.