I think that Team 17 needs some help. Some dastardly villain has clearly locked the developer up and abandoned them, because less than a year after releasing the excellent Worms Revolution, the invertebrate-obsessed studio has only gone and made Worms Clan Wars, which is not only a proper, fully fledged continuation of the venerable series, but a high point for the franchise.

Perhaps the very worms they so admire have risen up and forced them into eternal servitude, and if this is the case, we should all get out our nicest stationary and write a strongly worded letter to these slithering, slimy dictators and demand that they give Team 17 a break. It would be well deserved, too, as they’ve already succeeded in the challenge of improving on a formula that was arguably perfected over a decade ago. 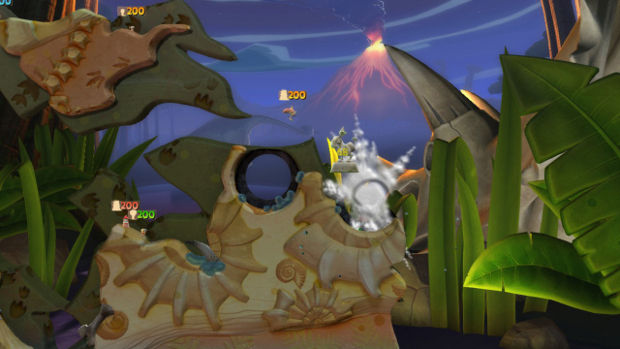 Maybe you don’t have a clue what Worms is. This is unlikely, and certainly embarrassing for you if true, but I’ll refrain from judging you. The Worms of a decade ago is much the same as the Worms of today, with newer titles adding a few spins and twists on the classic formula but generally sticking to what made it work all those years ago (other than the terrible 3D Worms titles).

Teams of tiny, pink warriors (now up to eight, once more) fight each other across a 2D, fully destructible and obnoxiously colorful map, using weapons from the mundane — but not too mundane, these are worms after all — like uzis and bazookas, to the completely mental, like exploding sheep and banana bombs. It’s all in the name of good, not-very-wholesome fun. Until one of your pals slaughters your beloved army of diminutive soldiers with an airstrike, that is.

All the lovely new features from Worms Revolution have been retained by its wriggling, younger sibling: classes, water, and physics, most notably. Combatants are split up into soldiers, scouts, scientists, and heavies, all with different movement speeds, health, and special abilities, like the scientist worm’s knack for healing his chums. They’ve been tweaked and balanced since Revolution, with area of effects for special abilities being added or increased, for instance. 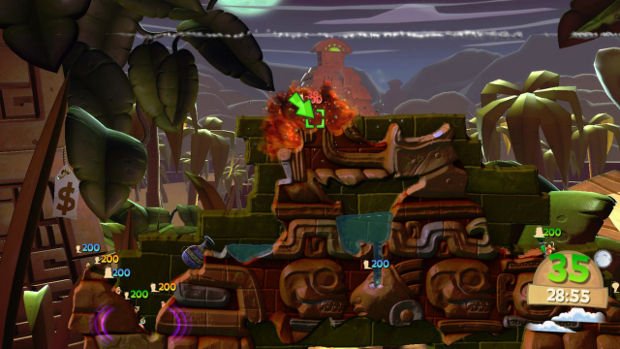 Water, which was probably the most welcome addition in Worms Revolution, returns. It’s much the same as it was before. Chucking water balloons at enemy worms will see them sliding down slopes and into a watery grave, and maps are filled with objects just waiting to be dislodged or blown up by missiles. But it’s been augmented by machinery, with water gates, for example, allowing players to flood entire areas and drown their enemies.

Physics puzzles have been thrown into the mix, too, with all manner of buttons, levers, swinging bridges, and the aforementioned gates being strewn throughout the battle arenas of the war-torn museum that Clan Wars resides in. Oh yes, the museum — that’s definitely worthy of a mention. There’s a story, you see. I know, you’re incredulous. A story! How preposterous. And you’d be right, it is preposterous.

A nefarious chap has pinched a sacred artifact known as the Stone Carrot, and is attempting to control all worms, because that’s just what you do when you’re completely barmy. The only thing that stands between him and complete worm domination is a ragtag band of worms and sociopathic crypt-robber Tara Pinkle, who’s basically a loony Lara Croft voiced by Katherine Parkinson of IT Crowd fame.

You might recall that Matt Berry, also from IT Crowd, narrated the worms’ last outing, so clearly Team 17 have a bit of a crush on the cast, and rightly so. While Berry’s hilarious narration is sorely missed, Parkinson is delightfully silly while briefing the A-Team of the worm-world and describing all the terrible things that she’s done while looting treasure from unfortunate tribes. 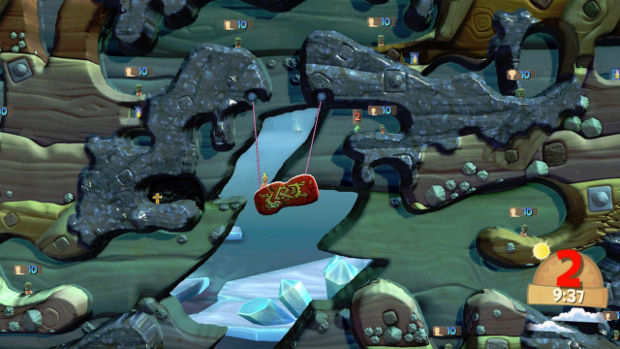 The single-player stuff isn’t usually the draw of Worms, and while it’s hardly the highlight of Clan Wars, it’s an entertaining romp that eventually becomes tricky in places, sometimes because of fidgety platforming, sometimes because of challenging level design. There’s a checkpoint system now, too, so replaying entire levels is a thing of the past unless you explicitly want to.

Maps loosely follow the museum theme, with Stone Age, Viking, and Aztec-style battlefields, just to name a few. A day and night cycle adds a bit of visual variety to these maps, to boot. They are, as you would expect, ripe for deforming with explosive weaponry, and littered with objects that can be dislodged to block the route of an enemy worm, loosened to let forth a torrent of water previous held back, or just blown up to create a gargantuan explosion. While Revolution‘s object interactions were a bit on the fiddly side, Clan Wars offers a greater level of control over item placement mid-battle.

What really elevates Clan Wars above its predecessors is the effort that has been put into the multiplayer component. There’s local multiplayer, then your standard online PvP shenanigans, but the truly special, properly new addition is the titular clan feature. With the same tools used to make a team of deadly, slimy worm-warriors, you can put together a whole clan, with a distinct appearance along with a shiny emblem and a clan name, and then recruit members to this clan. 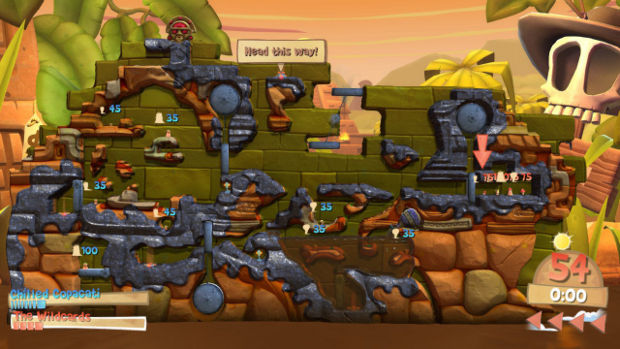 Clans compete for leaderboard positions, creating a perpetual worm-war and, hopefully, all the splendid drama, grudges, and competitive intensity found in eSporty games. Ultimately, its success lies in its ability to maintain a healthy population, which certainly won’t happen if Team 17 keep churning out more Worm titles, so one hopes that they will take a breather.

In a novel twist, the floodgates have been opened up to user-generated content, with Steam Workshop integration. So in addition to the new weapons like flying monkeys and teleporter guns — both of which can be used to help and hinder by moving objects and worms around the map — there are a slew of cosmetic items and player-created maps just waiting to be downloaded.

While it doesn’t stray too far from Worms Revolution, a game less than a year old, the focus on competitive multiplayer and custom content adds both longevity and depth to the long-running pastime of wormicide. If Revolution was the best that Worms had ever been — and it was, because I said it was last year — then Clan Wars is now the definitive version.