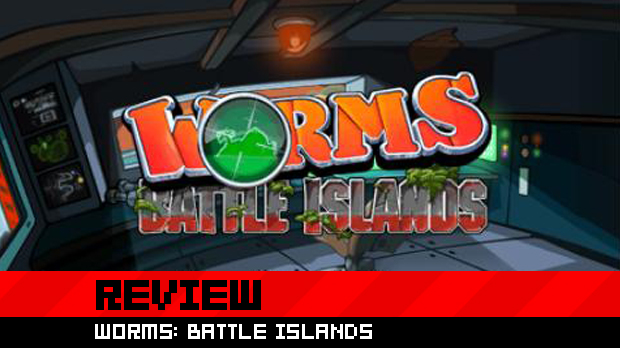 Milking a franchise is one thing, but if you hook a milk machine up to a cow for long enough eventually nothing’s going to be left. The cow’s going to fall over, die, and the only thing you’ll be sucking out are the innards of a rotting carcass.

This seems to be the route Team 17 has gone with the Worms franchise, but who can blame them?  They keep pumping out the same game with a shiny new name slapped on it and people keep buying the damn thing.  I think we’ve been playing what’s almost the exact same game for fifteen years.  So is Battle Islands worth it?  Maybe. 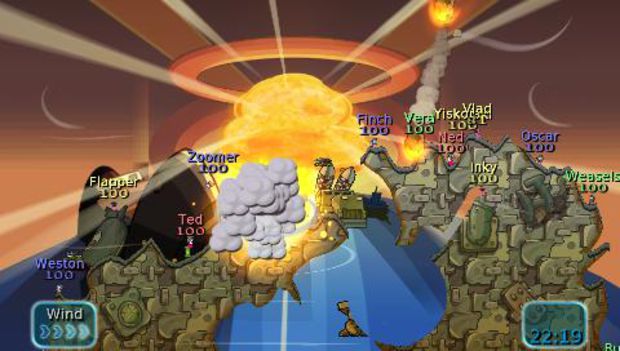 If you’ve never played a Worms title I’ll describe what they’ve been reproducing.  You’re a small team of worms on a large 2D landscape that can span multiple screens.  It usually has a theme like a snow covered lake or a field with various objects scattered about that can be used as cover, or to get a height advantage.  Your objective is to kill all the other worms before they kill you.  To do this you can use dynamite, missile launchers, grenades, cluster grenades, jet packs and more.  As you’re setting off explosions (hopefully close to your enemies) giant craters are left behind deforming the playing field.  It can be a lot of fun.  The problem is that they’ve been doing this for so long now that there’s 14 of these 2D games on the market.  The Worms franchise feels dead.

There’s already two Worms games available on the PSP. Worms: Open Warfare, and Worms: Open Warfare 2. This means that Worms: Battle Islands is going to appeal one of two groups.  The people who can’t get enough Worms, (even though it’s the same game) and those who want a worms title on the PSP, but don’t already own one.  For those still interested, here’s the game types you’re getting. 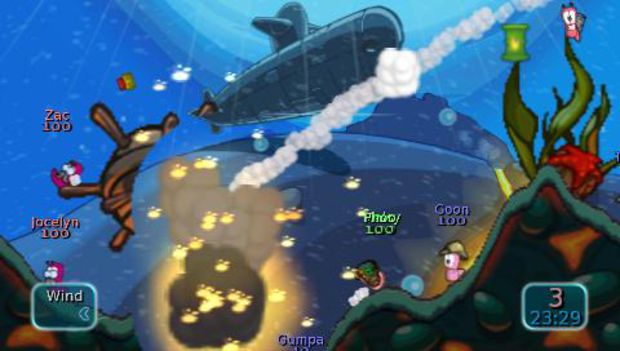 The campaign. Here you’ll take over large chunks of land, collect blueprints and take over islands by winning matches.  It’s traditional Worms gameplay at it’s best topped off with a boss fight once the four surrounding islands have been conquered.

VS mode. This allows you to play with up to 3 friends on one PSP, against computer opponents, or against a mix of the two.  Perfect if your on the go and don’t want a lot of hassle connecting two PSPs.

Online VS. Here you can connect via ad hoc to another PSP, or hop online and fight against… well nobody.  After trying multiple times over the span of 3 days I couldn’t find a single match.  You can download flags and landscapes to use in online matches, which would be great if there were any.

Time Attack mode.  You think it would be a, defeat all these enemies as fast as you can game type, but it isn’t.  No, you’ll instead use your jet pack or rope and fly through some painfully boring landscapes while trying to beat the “tracks” best time.  It’s not very fun.  Finally, there’s Puzzle Mode. 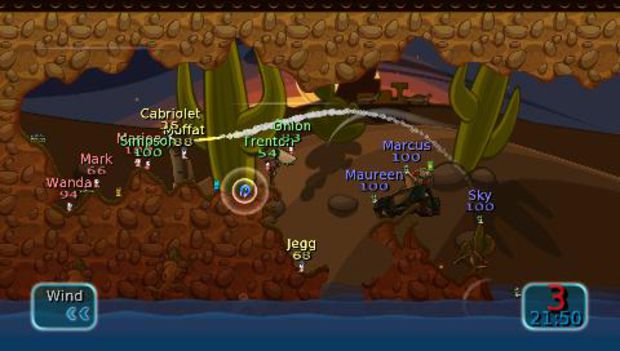 Possibly the games saving grace, Puzzle Mode kept me challenged and gave me the most joy.  In this game type you’re given a specific obstacle to overcome, such as not being able to move or only having a specific weapon and you need to try and defeat all the enemies on the screen.  It was fun trying to calculate the velocity needed to throw a magnet, make a mine hit my opponent and watch it blow up in his face, or see if I could hit an activated mine just right with a baseball bat so it blew up at the perfect moment. These puzzles were my favorite part of the entire package, not only because they were something new, but because they made me better at the game.

That’s about it. The innovation this time around was supposed to be the new “Tactics Mode.” Team 17 said this was going to “redefine multiplayer worming” but all it boils down to is selecting something from a menu before a match in an effort to tip the scales in your favor. They also tried to spice the game up by adding a customization option where you can build new weapons with the blueprints found, or by adding some barely entertaining cut scenes into the mix. It just didn’t work very well. Look, you can slap all the smiley stickers you want on a rotting carcass but it’s still going to smell, and it’s still going to be painfully obvious that it’s a rotting carcass.

And this particular rotting carcass has long loading times. 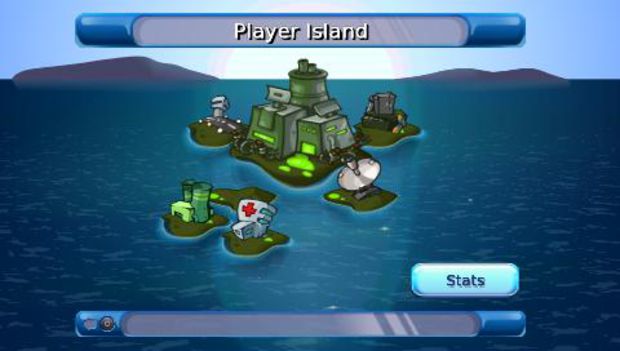 I hope Team 17 can find a way to breathe some new life into this dying franchise because at it’s core, Worms games are great. Teddy Grahams are great too but if you eat 14 boxes of Teddy Grahams they’re not so great anymore. Only the most dedicated of fans, or someone who’s never played a Worms game before should pick up Worms: Battle Islands. If you still want a Worms title for cheap, save some cash and pick up one of the other two titles already available on the PSP.  You’ll probably find them in a bargain bin for a fraction of the cost.