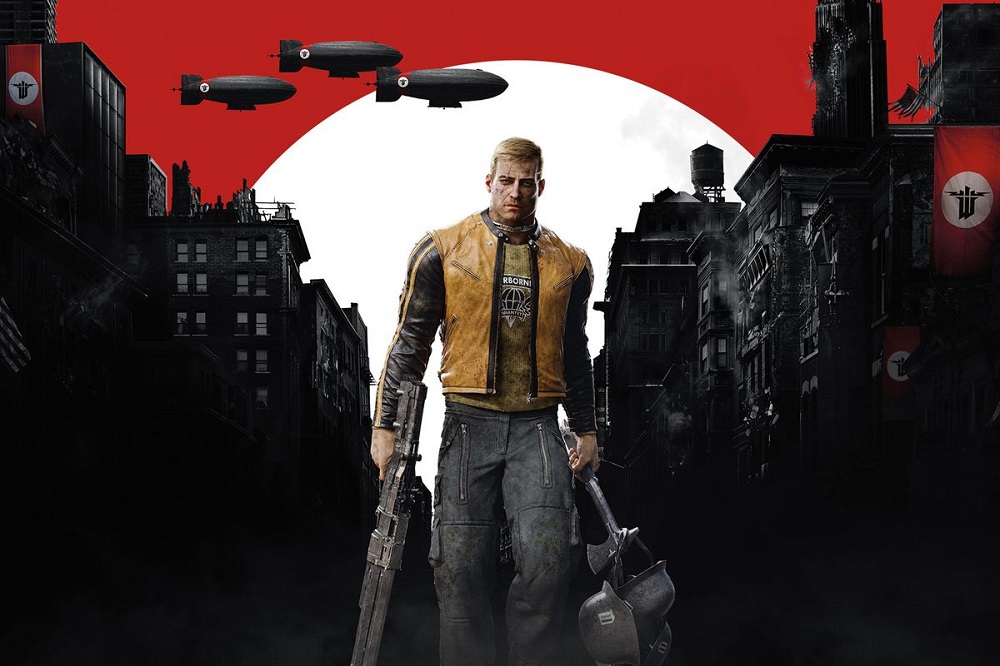 Do you remember back in 2013, when franchise reboot Wolfenstein: The New Order was first announced? Everyone was furious about the title’s marketing campaign, with many gamers taking genuine issue with the gleeful abandon in which the game’s Nazi-killing themes were represented.

Oh no, wait, actually no-one gave a shit. It basically wasn’t an issue. Roll on a mere four years later and we have folk fuming over such concepts. Nazis have been getting obliterated in Call of Duty, Medal of Honor, et al for decades, no-one batted an eyelid. Yet now, suddenly, we’re supposed to start wringing our hands and applying pseudo-intellectual pontification over such matters? What happened?

One of the reasons people cry foul with The New Colossus‘ marketing is because they see similarities to today’s climate (in rare cases, perhaps themselves) referenced within it. A climate that may not have seemed quite so contemporary back in 2013. The Wolfenstein narrative is a fictional tale about the successful rise of global fascism. If people want to complain that Bethesda are cheaply “exploiting current events,” then how did we let those events become current?

The issue here isn’t that Bethesda chose to lampoon real-world political slogans, or genuine feelings of civil unrest, with a sly wink, in order to sell their wares. Hell, they were making these games years before such slogans were in the public zeitgeist. No, the issue lies with us folk, for allowing such a gross climate to return to a state of prominence, thus being ripe for artistic reference in the first place.

But that’s barely the tip of this latest video game hot potato, another topic for another time, maybe. But right now, gather your arms brothers and sisters, ‘cos we got a Nazi regime to smash. 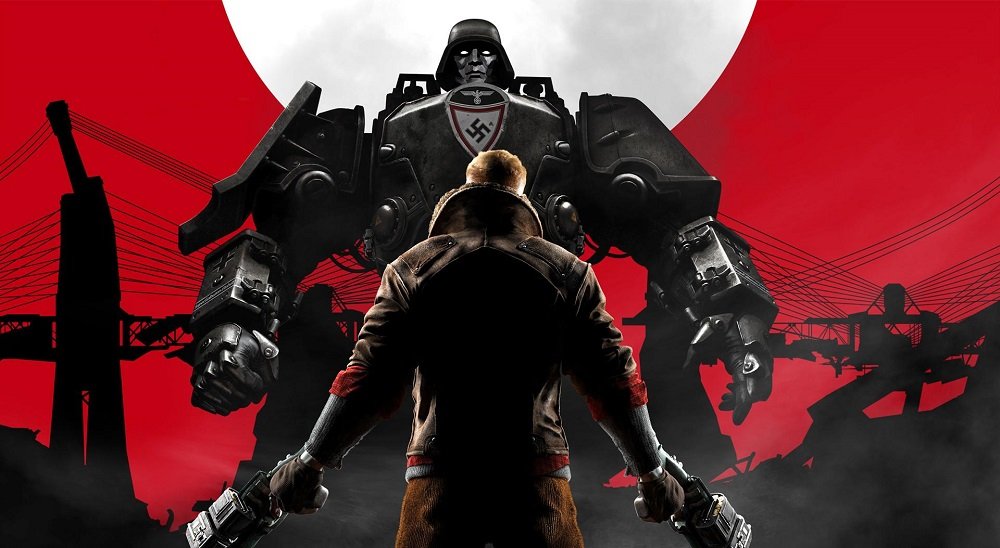 Colossus picks up immediately where The New Order left off. Having been rescued from death’s door by his rebel family, The Kreisau Circle, Col. B.J. Blazkowicz and his motley crew of resistance fighters reunite on-board their stolen U-Boat, Eva’s Hammer. Though the Deathshead compound has been successfully obliterated, the Nazi regime remains steadfastly in power across the USA. With B.J. slowly succumbing to his fatal injuries, and a vengeful Frau Engel obsessively on their heels, The Kreisau Circle surmise that if any hope is to be had of stamping out The Reich, then America is to be liberated.

A first-person-shooter in the epitome of the genre, players run ‘n’ gun their way through thousands of Nazi stormtroopers, creepy androids, and monstrous supersoldiers, armed with an array of (very) heavy artillery. From hatchets and shotguns to flamethrowers and chump-disintegrating lasers, Blazkowicz dual-wields monstrous firepower, literally vaporising the opposition en masse, in one of the most cathartic shooter experiences available. Though a stealth approach to some missions is a viable option, c’mon, we have Metal Gear for that, why not pick up that experimental matter-destroying cannon instead? Colossus, aware of its simplistic gameplay, chooses to accent its visuals, utilising some stunning light and shadow mechanics, intricate character modelling and some of the best flame, explosion, and particle physics I’ve seen in some time.

While all this gung-ho Nazi-smashing action does provide a solid, pulse-pounding challenge, some elements are a bit uninspired. A few of the game’s maps are flabby and needlessly large which harms the pace of the running battle. There is also a surprising lack of enemy types too, and by the halfway point you will have seen most of the cannon fodder the game has to offer. Sadly, boss battles are pretty much non-existent, and those who enjoyed taking down the the gargantuan London Monitor from The New Order, or enjoyed the multi-stage fight with Deathshead that rounds out the same game, may be disappointed to learn that there are no such set-pieces here. As such, though the fight is an enjoyable one, the campaign lacks memorable showdowns with unique enemies, and thus becomes a tad dry by the final act.

The real passion project in Colossus is the game’s high-drama, high-camp storyline, which is told in fantastic cinematic and in-engine cutscenes. The characters of the Wolfenstein universe are great; we love the heroes and despise the villains in equal measure, thanks in no small part to the game’s excellent motion-capture, strong dialogue with a hefty side of patriotic cheese, and superb voice-acting. Colossus‘ story runs a gauntlet of dark themes, including scenes of upsetting violence, vulgar hatred, and heartbreaking mental cruelty, before swiftly switching to narrative devices that wouldn’t be out of place in a Cannon Films action flick.

The skill in MachineGames’ storytelling is its ability to align these ridiculously opposed elements, while still maintaining a perfect balance between taut drama and total farce. There are scenes in the game that are genuinely distressing, slotted beside brilliant, mind-blowing “What. The. Fuck?” moments. (An awesome incident, featuring Blazkowicz’s heavily-pregnant partner Anya, just has to be seen to be believed.) I could give so many examples, but who am I to ruin the surprise? Unfortunately, the game’s ending seemed slightly anticlimactic to me, and was followed by a credits theme so fucking horrible that it killed my post-game hype. 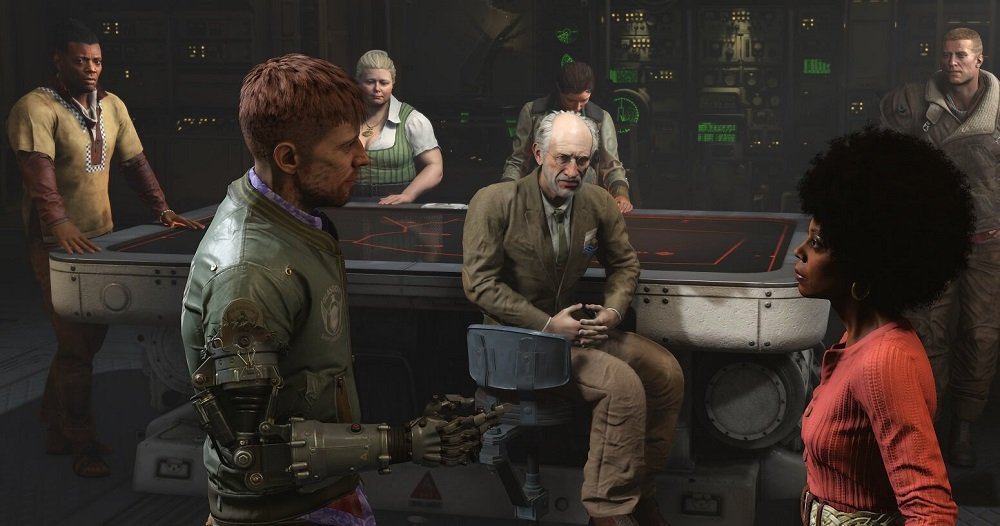 Though Colossus has no multiplayer, there is some extended replay value here. Eva’s Hammer features a world map, which unlocks optional side-missions as you progress through the campaign. There are also Enigma codes to be found and decrypted, amusing tasks to perform for members of The Kreisau Circle, and a whole host of collectibles to be found. Those wanting to go full retro might enjoy “Wolfstone 3D,” an in-game recreation of the 1992 classic, with an amusing twist. These extras help add value to the 10-to-12 hour story campaign.

Wolfenstein II: The New Colossus is a great game that has some frustrating hiccups. Its high-octane, lead-pumping action looks and feels fantastic, but does start to wear thin toward the climax. The enemy design is suitably imposing, but the range of enemies and lack of boss fights is disappointing. The storyline features excellent characters, a good script, and brilliant voice-acting, but occasionally slips into melodrama and has a somewhat lackluster finale. What Colossus does well, however, it does with genuine excellence, which helps to paper over these noticeable cracks.

Part political commentary, part comic-book farce, completely batshit insane, and as primal as an FPS title can be, Wolfenstein II: The New Colossus is certainly recommended. It has a great cast, wicked visuals, breathless combat, and unforgettable story moments. It cannot be denied that there are flaws, and they are tough to ignore, but the game’s wanton carnage and narrative head-fuckery help slice through them as cleanly as a hatchet through a Nazi’s cranium.