Wizard of Legend was Kickstarted back in 2016 and promised a fast-paced dungeon crawler inspired by the original procedurally generated exploration game, Rogue. Roguelikes have enjoyed an upsurge in popularity ever since Spelunky took the world by storm, and lots of indie games have come out since then which borrow elements from the formula like permanent death and randomized playspaces.

Wizard of Legend offers players a deliberate throwback look, hearkening back to the late 16/early 32-bit generation, just before polygons took over from pixels entirely. The resulting game looks amazing and (for the most part) plays beautifully, but the version I played has some issues that keep it from achieving greatness. 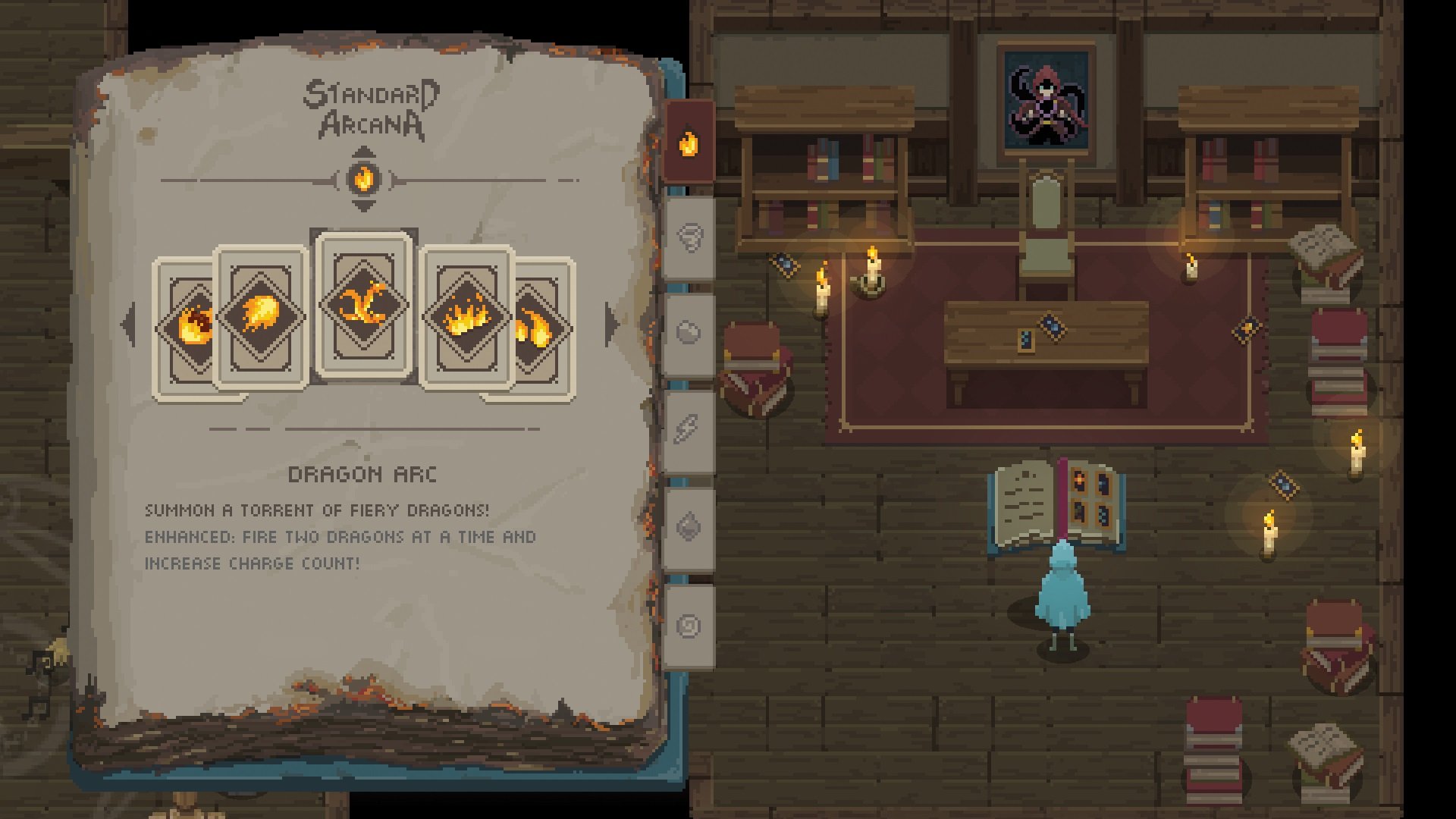 Wizard of Legend puts you in the cape of an aspiring magician and cosplay enthusiast, the type of person who dresses up before going to a museum exhibit. The local museum is hosting an exhibition about the Chaos Trials wizards participated in hundreds of years ago, and the game’s tutorial level walks you through the grand opening. It’s a clever way to introduce movement and combat to a novice, though I doubt anyone will be shocked by the time vortex that opens and sends your character back to Ye Olden Dayes to participate in the Actual Chaos Trials For Real. You wake up in a small house populated by talking furniture, and from there it’s up to you to start challenging other wizards fool enough to stand in your way.

The main goal is to clear 10 dungeon levels, fighting a miniboss at the end of each stage.  Every third level is a fight against one of the three main bosses, wizards who’ve dedicated their lives to the study of Fire, Ice or Earth magic. The two levels preceding each of these masters are themed around their element, though they show up in a random order each time you make an attempt. Completing the entire string of dungeons will allow you to claim the title “Wizard of Legend.”

This is complicated somewhat by the chaotic nature of the dungeons you’re exploring. Every time you start a new Trial, the dungeons’ layout, items, traps, shops, and enemies are all placed randomly. You’ll need to adapt to the shifting configurations to succeed, and it’s great for people who want a lot of replay value since you’ll never play through the same dungeon twice. You can add a friend to join you in local multiplayer, and even though it makes fights more chaotic, the increased firepower is generally worth the tradeoff. No online co-op is available at this time.

The combat is very deep, with every attack assigned to a different button. Button mashers won’t make much headway here though, as success has more to do with managing your spells’ cooldowns and avoiding incoming damage. As a wizard, all of your attacks are done with spells (here called “Arcana”), each of which falls into one of five elemental categories. You’ll start with some basic Wind and Fire spells, but can later learn some from the Water, Earth, and Lightning circles. Some enemies have resistances or weakness to a certain element, but none are completely immune so it’s not totally punishing to specialize.

Fighting the assorted monsters is a lot of fun, and building a perfect combo from the spells you have available will certainly lead to no end of theorycrafting. It plays out a little like a twin-stick shooter, and you’ll need to aim your spells carefully to get the most out of them. You’ll spend a lot of time dashing to avoid incoming projectiles or clear pits, and it’s pretty satisfying knocking monsters into hazards. On the other hand, the three flavors of dungeons are all pretty, but there’s not much different about them except the types of traps you may encounter.

New spells and other items can be purchased between runs for a currency called “Chaos Gems,” and this is the only way to permanently improve your character. You’ll find both gold and Chaos Gems in dungeons, earning them by defeating enemies or destroying smashables. If you die in the dungeon, you’ll retain any Chaos Gems you collected, but you’ll lose any gold you’ve picked up, as well as any other items you found while you were down there. You can buy Relics, Arcana, or other useful items during a dungeon run with the gold you find, but they only last as long as you’re on your current run and will disappear when you respawn back in your house. 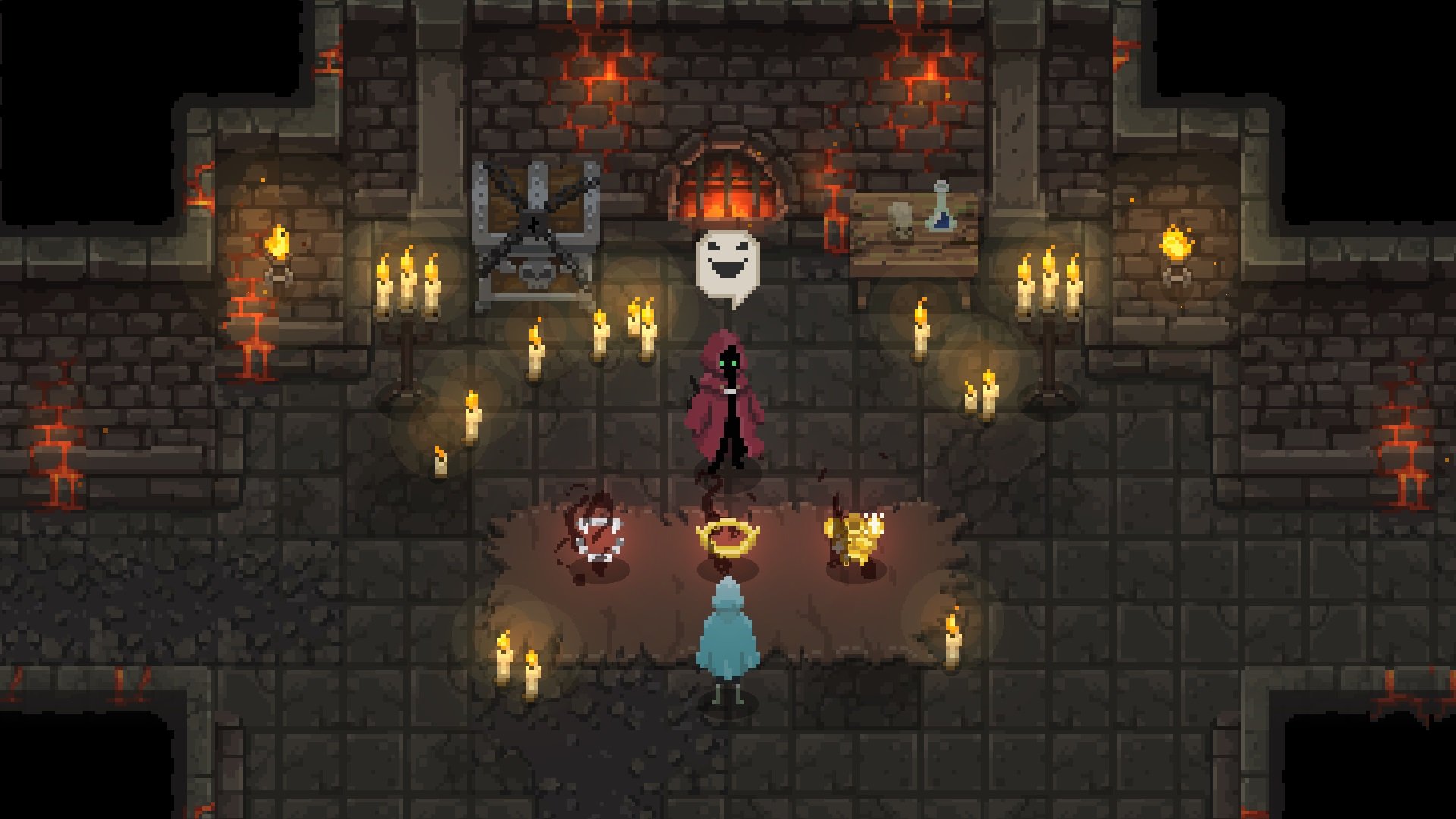 The dungeons contain many NPCs, and there are always three shops on every level. These vary in what they offer, but you might find a sinister person giving away cursed items, a dressmaker who’ll shine up your cape, or more standard shops offering relics and Arcana. There’s even some strange shops that will offer to buy your relics, or a piñata who taunts you into delivering the most punishing combo you can. Finding these stores while exploring is useful because once you’ve found the room with the level boss, you can warp between them at will.

Before beginning a run you’ll prepare by selecting four spells, one relic, and a cape. Each of these will have significant impact on how your attempt will play out, and it’s a good idea to practice your combos on the training dummies before heading below. Unfortunately there’s no way to know what something does until you’ve already purchased it, and with more than a hundred spells and relics you’re bound to buy something you won’t end up using. It’s not so bad if you buy it with gold in a dungeon, but saving up Chaos Gems for something in town only to find it doesn’t fit with your playstyle is a huge disappointment.

I felt like I had wasted my time more than once after buying something new and shiny, and I would have appreciated a way to try out the merchandise before committing to it. A codex like Spelunky‘s journal would be helpful too, but instead you’re reliant on your own memory to keep track of what each spell or item does if you haven’t bought it yet. Cursed items never get documented, so you’ll need to keep a FAQ open or write notes for yourself if you want to explore this gear’s dubious benefits.

Spell effects are beautifully animated, and combat feels fluid and entertaining. There’s a lot of attention to detail, and little touches like smashing through breakables without slowing down or the way each of your spellbook’s pages have been damaged by exposure to magic are superb. The pixel graphics do a great job of showing detail without overdoing things, and the screen is pretty easy to read. Enemy attacks are telegraphed by red lines or circles, and getting hit by one will take a significant chunk off your life bar. There’s not much room for error here, which is why I had such a problem when I started noticing frame skips not long after I started. 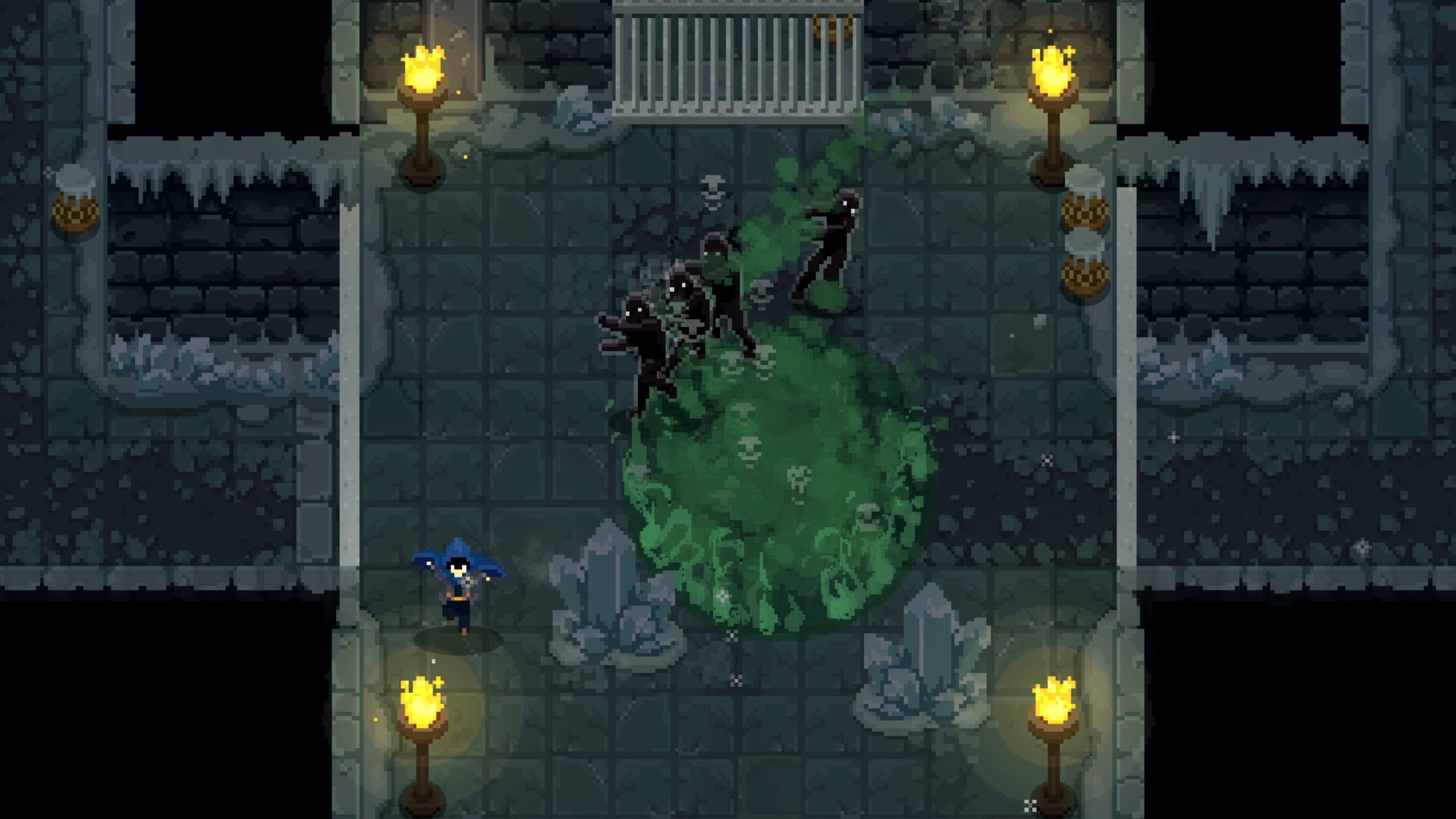 I don’t mind playing a punishing game, but when I die (especially in a game with permadeath), I’d like to be able to see what I did wrong, learn from it, and try not to make the same mistake again. Unfortunately, the frame skips I encountered meant I kept taking damage I should have been able to avoid, and I found this infuriating.

There didn’t seem to be any commonality to when a frame drop would occur; I noticed them in handheld and docked mode, and it didn’t seem to matter if there was a lot of action on screen. It’s incredibly frustrating to have a good run go down the toilet because of tech issues, but that’s exactly what happened to me over and over again. I don’t know if other platforms suffer from the same issue, but if they don’t it makes the Switch version tough to recommend.

I want to love Wizard of Legend. It‘s a fun, fastpaced beat-em-up with lots of replay value, gorgeous pixel art, and an incredibly deep combat system. But the frame skipping I encountered made playing it an exercise in frustration. If the issue is ever sorted out, I’ll give it a more enthusiastic recommendation. For now, I just wish it played more smoothly.

[This review was based on a retail build of the game provided by the publisher. Dale North, former Editor-in-Chief of Destructoid, composed and performed music for Wizard of Legend. Music was also facilitated by former Destructoid employee Jayson Napolitano. The author has never worked directly with Dale or Jayson. As always, no relationships were factored into this article.]