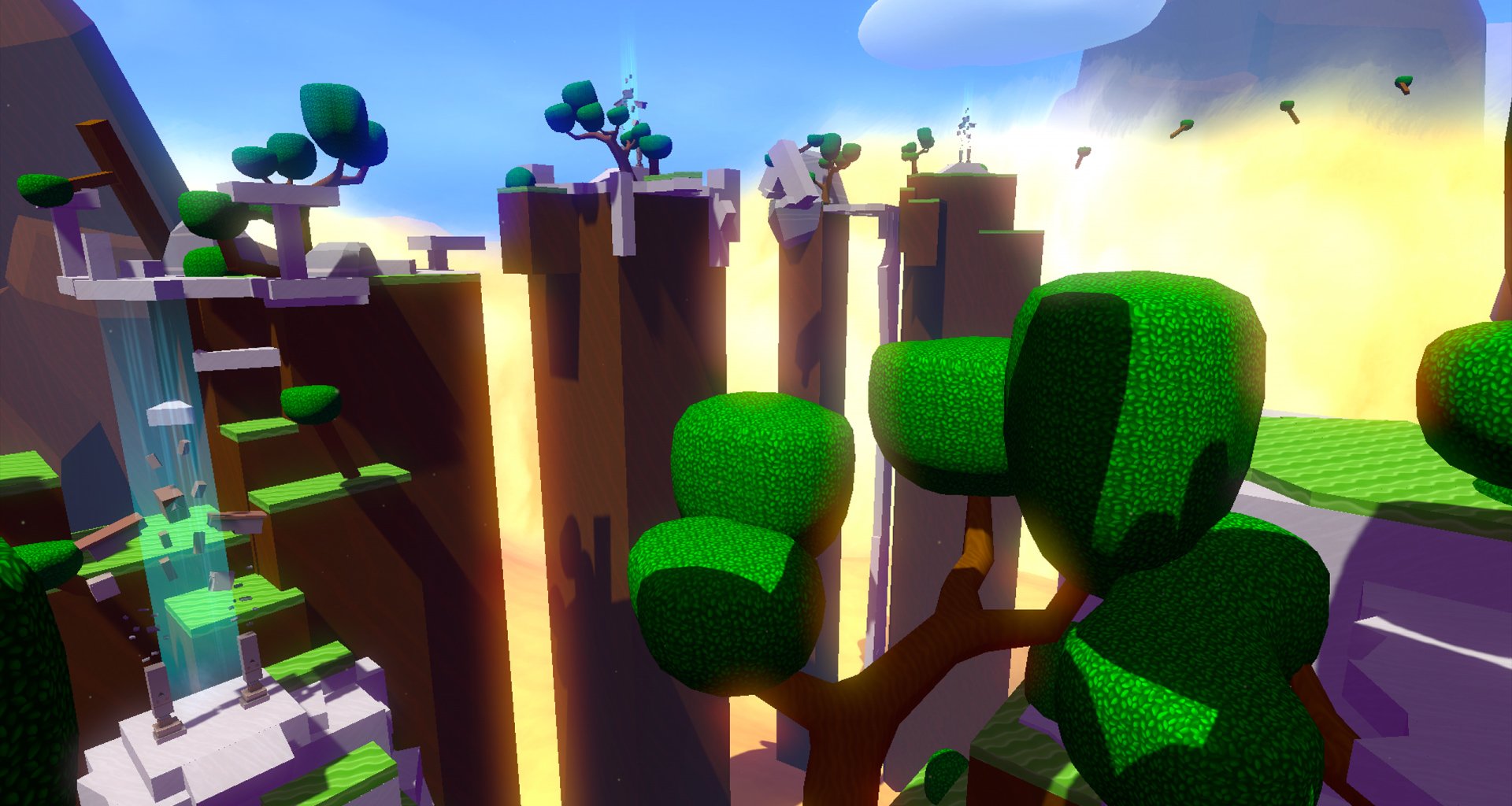 Over the course of my childhood, I basically dreamed up the concept for Mirror’s Edge. But it wasn’t one of those fleeting dreams where you kind of forget it the next day — it was one where I actually got up and made that dream a reality in notebooks and planning pads. Well, a reality in my household, at least — I never actually made that game.

Because of that passion, I’m still chasing the rush of first-person runners whenever I can get my hands on one. Windlands fits that bill to an extent, but sweet Jiminy Cricket, prepare for whiplash if you opt for the VR version! 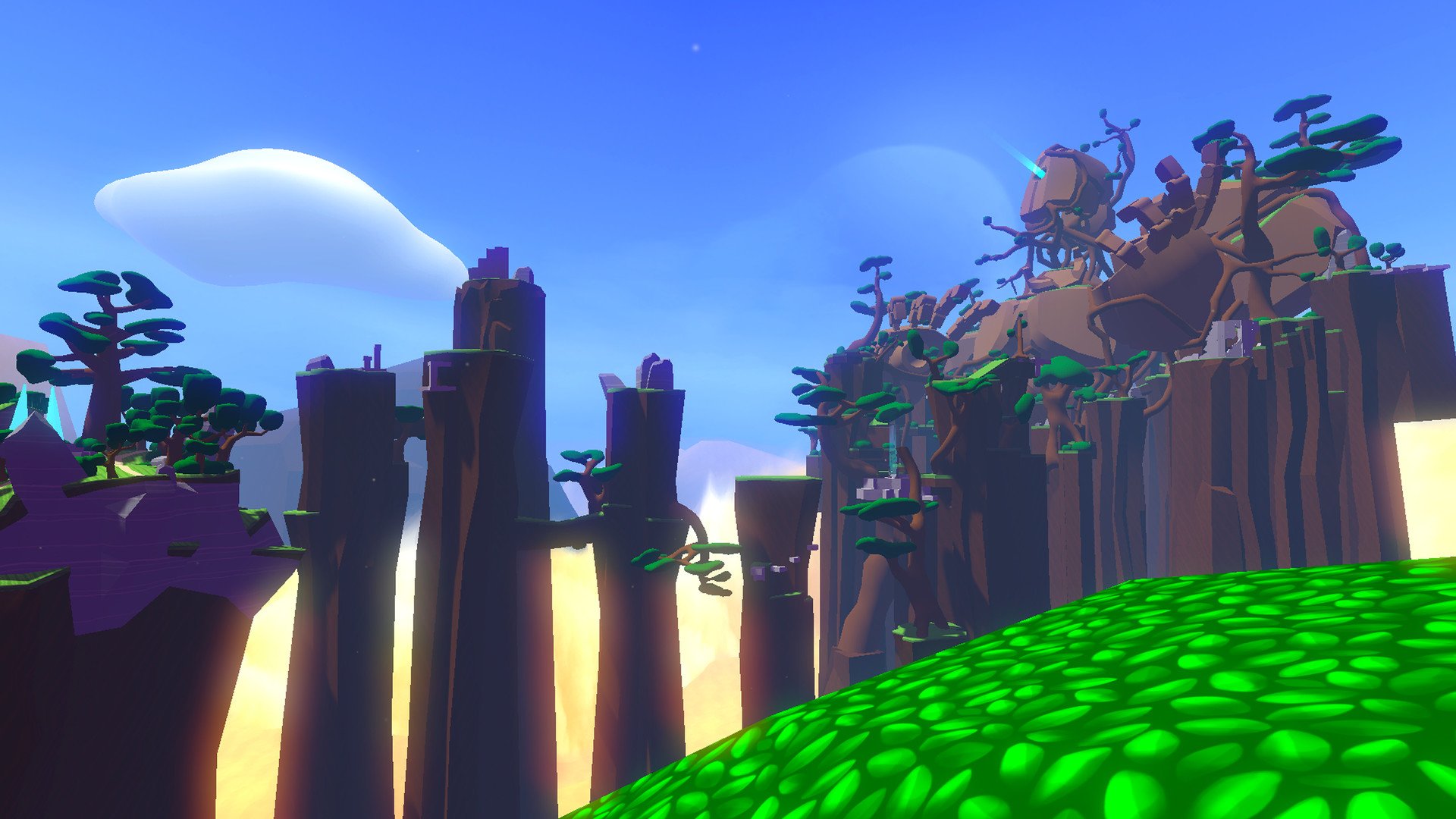 Windlands has no desire to bog players down. It features a minimal story and very little in the way of a tutorial. Before you realize it you’re off floating around the game’s whimsical setting, flying over gaps and triggering a trusty grappling hook mechanic to traverse the environment.

Goals aren’t paramount (though there are collectibles), as the spirit of exploration and the desire to locate all of the spokes on the hub world wheel is the primary focus. Your only means of traversal are leaps and the aforementioned hook, and from there, it’s basically up to you to decide what to do. Vistas and pitfalls are like mini puzzles, forcing the player to figure out how to get to an intended area — “if you see it, you can go there” is generally a true mantra here. For those of you that need an overarching purpose to play games, this one probably isn’t for you.

As for me, I loved just leaping around in a virtual environment willy-nilly, as it was surprisingly cathartic and unique to the VR space. The experience is meant to be played sitting, which sounds odd, but after about 10 minutes in the Rift I was transported into the world and bought into the concept. It can get wild — I mean, holding on to a tree hundreds of feet up, looking over your shoulder for another grappling point wild. Windlands makes the perfect case for a VR Spider-Man game. But the more I played, the more I noticed the technical issues dragging it down.

Even in its current Oculus launch incarnation, the art style leaves much to be desired. On one hand, I can see the charm. The pastels are soothing, and everything is clearly marked so there’s no confusion while platforming. But it’s tough to shake the feeling that a lot of it is placeholder art from an engine creation tool, especially when players get close and see that textures often aren’t monochromatic.

Once I started to really dig into the controls, it got stickier. Movement and looking around with the left analog stick and the Rift respectively is a dream. It’s responsive, and acts just like a first-person VR game should. Hell, it’s still crazy to me to be able to frantically look around while falling to find something to latch onto, even if it actively hurts my neck. But unfortunately the right analog stick, which is responsible for turning, is so jarring that it really mars exploration. That’s mostly because the act of “turning” triggers a transitory switch of the camera that pops in and out — it’s not smooth in the slightest. Even turning this option off (which is bafflingly enabled by default) doesn’t improve much as it still feels clunky overall. The growing pains of early VR.

This is exacerbated by clipping issues with the terrain, and a general framerate hiccup that happens every so often. This type of temporary technical issue is fine for other games, but in a VR experience, it can cause quite a bit of discomfort. When a dizzy spell like this hit, I had to actively pause the game and wait it out, or try to get to a new area, which isn’t ideal for a game all about near-limitless open-world exploration.

Windlands is one of the most beautiful games I’ve ever played. From the uplifting soundtrack to the thrill of jumping around in first-person and grappling like a maniac, it’s a fun experience. It’s just that right now, in terms of VR, it’s exactly that: an experience, flaws and all.

[This review is based on a retail build of the game provided by the publisher. For reference, the game does not denote an Early Access state on the Oculus store (a state which is supported  by Oculus VR) where this was tested, but it does on Steam.]