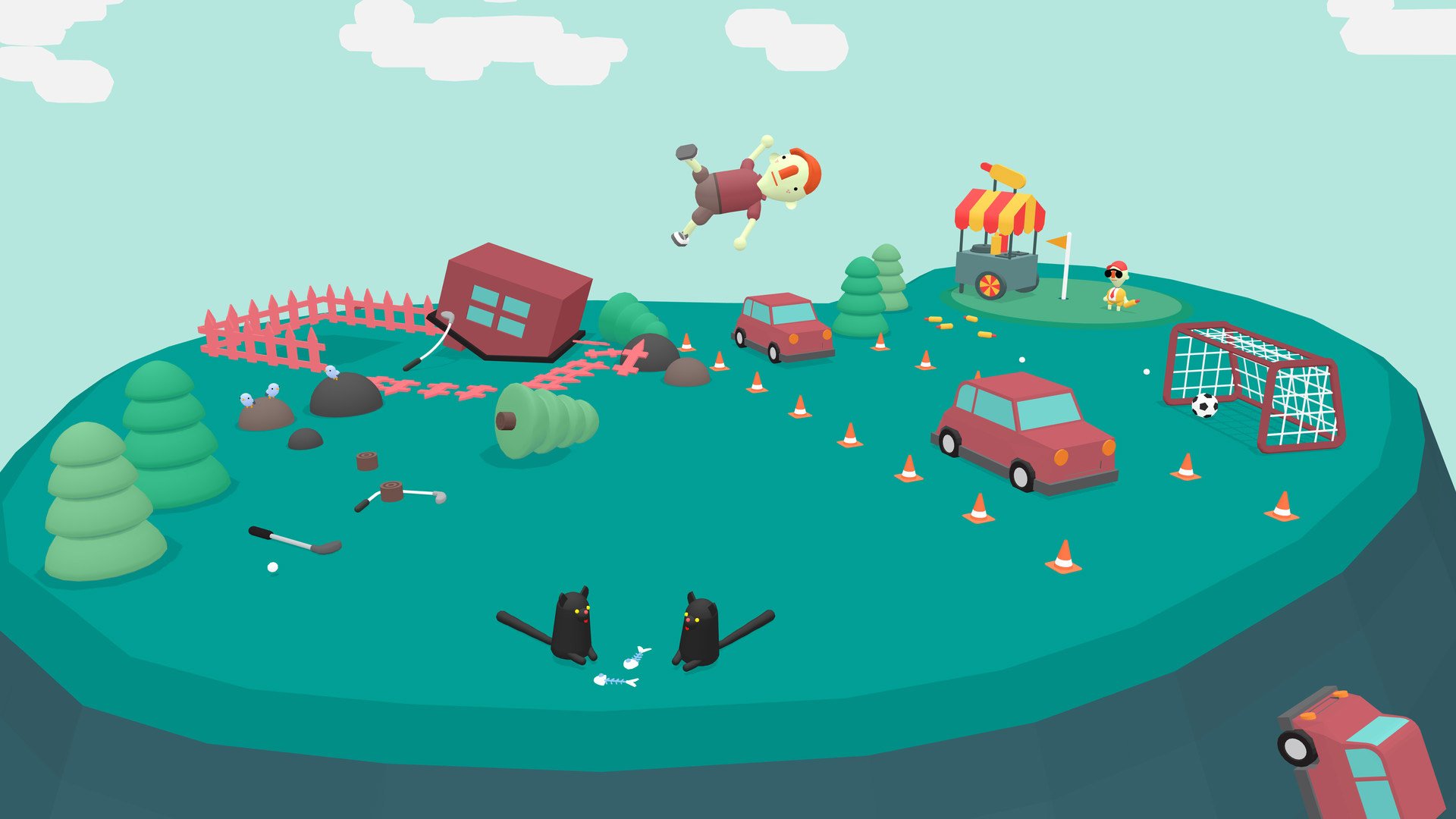 Are you too good for your home?

What the Golf? is as good as I hoped it’d be, which is to say, “very.” I’m honestly relieved!

The game takes an otherworldly view of golf, twisting and turning a basic premise in increasingly outlandish ways not unlike something out of WarioWare. It’s funny – and, crucially, fun.

There’s no shortage of over-the-top silly games out there that are far more amusing in theory than they are in practice, and thankfully, What the Golf? avoids falling in with that crowd. The pace is always bounding from one surprise to the next. By the time you catch up, it’s already onto the next joke.

If you’ve seen any of the trailers or gifs, you’re pretty much up to speed. What starts as a simple exercise in golf quickly devolves into chaos. Suddenly, your golf ball isn’t a ball at all, but rather, a house. Or a horse. Or a car caught up in a race. Or a cowboy hat that needs to be flung into bowling pins.

Most of the time, you can’t even be sure what will happen when you take that first swing. Some levels are played in portrait mode, others are presented in landscape like a side-scrolling platformer, and certain stages are straight-up first-person shooters with gyro aiming. Again, this game goes places.

To keep things semi-grounded, the controls are consistent across more or less every level – you aim and determine the power of your stroke just like pulling back on a slingshot. It’s simple, it’s precise, and it feels great. What the Golf? works best with one-finger touch controls, but there’s controller support, too. I had decent enough results using a DualShock 4, so if you’re skimming this review ahead of the game’s release on other platforms like PC and Nintendo Switch, you shouldn’t be concerned.

What the Golf? never seems to sit still or dwell on any one idea for too long, and that’s where its magic lies. My biggest concern going in was that there would be duds, and while there are a few missteps, the sheer number of unique concepts is astounding. Even riffs on well-established games like Katamari Damacy, Super Meat Boy, Superhot, Portal, and Guitar Hero end up feeling original in their own way.

My other pleasant surprise? The presentation. It really ties the whole game together.

If What the Golf? was a stitched-together collection of one-off gags, that would’ve been fine, if a bit underwhelming. But it’s not! There’s a charming, cohesive overworld to explore, complete with different themes for each zone and Arkanoid-esque boss battles. It’s inherently enjoyable to just putt around as you move from area to area. I’m also happy there’s some non-linearity to the level selection.

Levels are unlocked in groups, so if you get stuck, you can try your luck elsewhere. And the developers smartly decided to set aside the most challenging goals – like getting par or a hole-in-one – as optional objectives. That design choice keeps the game flowing and feeling breezy, which is perfect for mobile.

You’re likely also wondering about the length. While I wasn’t keeping exact track, I can offer an estimate. (Funny enough, there’s an in-game counter, but mine’s busted.) It took me a good couple of hours to beat What the Golf?, then I spent another couple of hours working back through the optional objectives, and I bet I still need at least one more hour to get most of the way there. Hitting 100% will be tough.

If you can make use of the one-month free trial for Apple Arcade, this game should be a no-brainer. It’s among the most fun I’ve had on my phone in ages. If you’re considering the pricier console or PC version of What the Golf?, well, just go with your gut. If this looks amusing to you, it probably will be.