West of Dead finds you playing as an unnamed specter, returned from the dead, and placed in Purgatory, Wyoming. No memory as to how you got there, and nothing to do but hunt down a preacher who might have the answers you seek. To find the preacher though you’ll have to work your way through an ever-changing labyrinth of enemies with only your guns and whatever items you can procure along the way.

In other words, West of Dead is a narrative-based roguelite which, in my experience, is always a gamble with the deck stacked against you. To that end I can’t help but feel like the game itself is stuck in a purgatory of its own making, caught between two genres that stand at odds with each other. It’s neither a raving success nor a miserable failure, but it definitely has some frustrating elements. 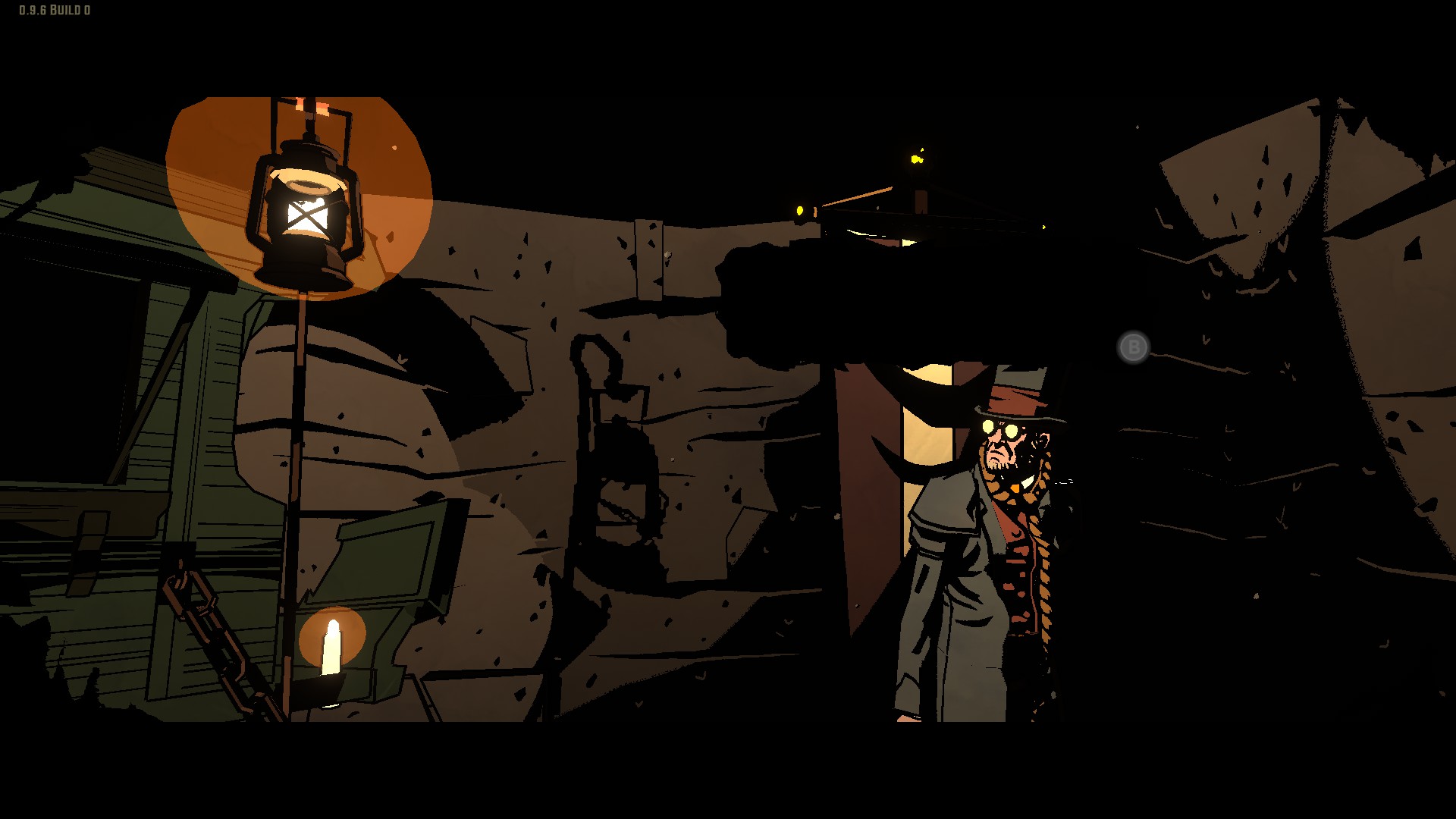 It cannot be denied that West of Dead is confident in its style. As you start the game, you are transported into the dark world the game inhabits with stark contrasting colors and a brooding main character voiced by industry veteran Ron Perlman. Spawning in some afterworld saloon, you mosey on up to the bartender and ask for some whiskey and guidance as to where you are. Soon enough you are on your way into the labyrinth.

Right from the start, the hazards of the roguelite genre start to pop up when you are given two randomized starting guns. There are three gun archetypes: the long-range but slow rifle, the short-range and powerful shotgun, and the middle-of-the-line pistol. Guns have levels that dictate their strength and can also include status inducers. There are unlocks in the game that expand your initial choices but you still run the risk of getting a crap gun for one of your first choices which feels unusual to not have a standard gun that you can get used to and that levels can be based on.

The randomized nature of the starting guns wouldn’t be so harsh if the levels weren’t randomized themselves. Each room is procedurally-generated and based around a concept of lighting and cover-based shooting. If an enemy is standing in the light, you can lock onto them and fire from anywhere across the room, but if they are standing in shadows you are on your own and can only track them by their muzzle flash.

The light and shadow mechanic is a cool concept, but a camera you can’t control combined with lock-on issues stunt its potential like a bullet in the gut. Your cover starts degrading as it gets shot. If your opponent is hiding in shadows, you are forced to run out and find a lantern to get a better shot. Depending on how far you have to run, you may be forced to spot dodge which is timed just long enough for you to dodge right into a second bullet that tracks you. It might not seem like much to take a shot in the face but in a game where health is tied to a limited-use flask and whatever you are gifted in the dungeon, every shot hurts. It also feels doubly cruel to reward a perfect dodge with a shot to the face.

There’s also this weird thing where after your cover degrades, it will start to grow back after a delay in the same spot. You would think that would be good but if you step near the cover while it’s growing, you will be temporarily stunned as the game tries to figure out what is going on. That stun has proven to be fatal for me a few times and those were the times that the game felt almost broken to me.

It’s clear that from a design point, the game was meant to kill you a lot and make you work for its love, which isn’t inherently a bad thing. The slow unlock of features through trading the sin of the dead you’ve collected is a lot of fun. It’s the fact that each time you die, you’re forced to hear the same story beats and go through the same interactions. It wouldn’t be so bad if the game didn’t force a camera change for dialogue with other characters. It may seem minor but it’s those extra seconds that start to wear on you life after life, especially if your last death came from bad RNG. Throughout the entire game, it felt as if there was a tug-of-war between the narrative and gameplay that never really found a good balance. It’s not a deal-breaker but it may be enough to shove less determined players away.

Through it all though, I’m still going back and playing it. The live, die, repeat roguelite mechanic has its hooks in me and although it’s frustrating at times, I’m working through gritted teeth to unlock more items to help me in future runs. The aesthetic beauty of the game helps keep me going as well as the music but I only wish some more tweaking had been done to some of the shootout mechanics. If you pumped hours upon hours into Enter the Gungeon then chances are you’ll find a similar grab in West of Dead, but be fair warned that there isn’t as much polish here. If it helps, it is launching day one on Xbox Game Pass so if you have that you can try it as soon as it launches.