“This video game is a work of fiction. Any resemblance to actual events or any real persons, living is purely coincidental. No organization or government agency has approved endorsed or authorized the use of their names or logos or product.”

For some time now, Ubisoft has opened many of its titles with a disclaimer similar to the one above, often placed front and center each time the game in question loads. While a company wanting to “cover its back” is understandable, it gets harder to swallow said message with each release. Ubisoft is heavily invested in narratives concerning political upheaval, corrupt governments, class rebellion, and the breakdown of society. But the publisher’s persistence in distancing itself from the topics it capitalizes on is getting long in the tooth.

Ubisoft’s fiction is frequently embedded in recognizable real-world drama. The publisher openly linked Watch Dogs: Legion with Brexit before reiterating that Ubisoft games are “not political.” The Division 2 featured war in the streets of Washington. 2018’s Far Cry 5 was about doomsday preppers following a false idol, while the upcoming Far Cry 6 concerns a fascist dictatorship on an island off the shores of the United States.

There’s nothing wrong with tackling socio-political subjects in any medium – creators can and should when the opportunity arises – but at least own your stake. Telling the audience that your wares “aren’t political” doesn’t wash when you set your latest adventure in “post-Brexit” Britain, open the story with terrorist attacks, feature dialogue referencing “fake news” and “social media conspiracies,” and then add British xenophobia, a work-shy Prime Minister, and a crumbling NHS to the mix.

When companies take this tack, it comes off as having your cake and eating it too, allowing the product’s marketing to bask in the headline-grabbing buzz of real-world concerns while not having to actually enter legitimate discourse with those for whom these themes may be disturbingly relevant. Make your point, but also own it. To do otherwise is arguably exploitation. 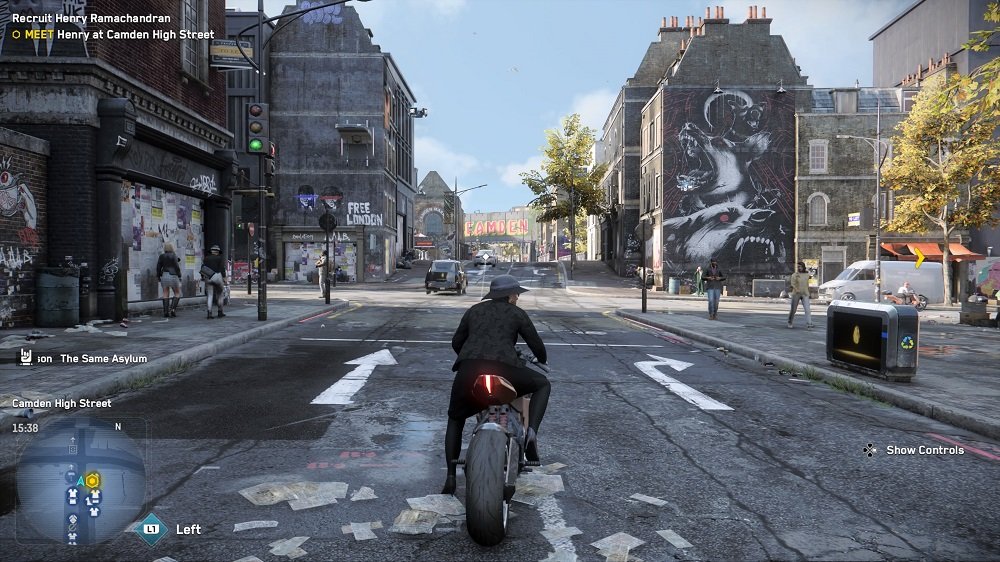 Watch Dogs: Legion is the third entry in Ubisoft’s high-tech, open-world crime series. The story concerns a London that has become a locked-down surveillance state following a tragic night of terrorist bombings, resulting in much death and destruction across the capital. DedSec – the franchise’s phone-hacking heroes – have been left holding the bag for this disaster, having been framed by an unknown party known only as “Zero Day.”

In the wake of the bombings, the British government has all but abandoned the police force, bringing in paramilitary security firm Albion to handle London’s law enforcement. In the following months, London does become relatively free of crime, but also free of human liberties. Albion, with its army of surveillance drones, its jack-booted soldiers, and its propensity for violence, rules over London with a fascist fist. It’s up to the hackers of DedSec – now deeper underground than ever before – to rally the people and bring about freedom, one terabyte at a time.

As a narrative concept, Legion sets the stage for an exciting, state-smashing rebellion. Outmanned and outgunned, our ragtag revolutions must use their wits, cunning and technical prowess to research their enemies and bring them down from within, toppling the government and its skull-cracking rent-a-cops using brains over brawn. But in reality, Legion translates this “Vive La Revolution” spirit into hours of relatively choresome missions, with almost all falling into a formula of Infiltrate, Hack, and Escape.

While the narrative persists in telling you that you’re being the Trojan Horse that’s bringing down a regime, it’s hard to feel like 007 when you’re repeatedly driving to locations, meeting a dude, driving somewhere else, opening a few doors, and hacking a terminal. While Legion is certainly peppered with its fair share of vehicular mayhem and head-popping gunfights, for the most part the campaign consists of a queue of mundane missions, often leaving the player feeling like they’re performing odd-jobs rather than taking down a dangerous dystopia. On a mission-by-mission basis, Legion is… fine, but it’s startling just how quickly gameplay becomes stagnant. The very first mission, before the credits have even rolled, is a “hold off enemy waves while a hack takes place” set-piece, setting the tone for the familiarity ahead.

The fresh element that Legion brings to the party – as its title suggests – is the concept of playing as a gathering of mismatched rebels, rather than a singular protagonist. Players seek out recruits to the cause while traversing the streets. Simply find a disfranchised Londoner, perform a short mission for them, and you have another DedSeccer on your squad. Each character brings their own set of skills to the urban war – perhaps they have access to certain weaponry, or a special drone, maybe they have legal skills to free your jailed teammates, or are a bit handy with the ol’ one-two. Legion‘s hook lies in the player building a bespoke party of operatives to ensure that, as a collective, DedSec has the skills on deck to tackle any situation.

It’s a solid concept, but unfortunately, the idea promises more than it delivers. For the most part, save for a few specific technical traits, very few revolutionaries are required in DedSec’s efforts to liberate London. A team of unique protagonists with individual abilities, skills, and perks is a great, Mission: Impossible-type idea, but in reality, the gimmick is mostly superfluous. Almost everyone you bag is, ultimately, more than capable of dealing with the majority of encounters. 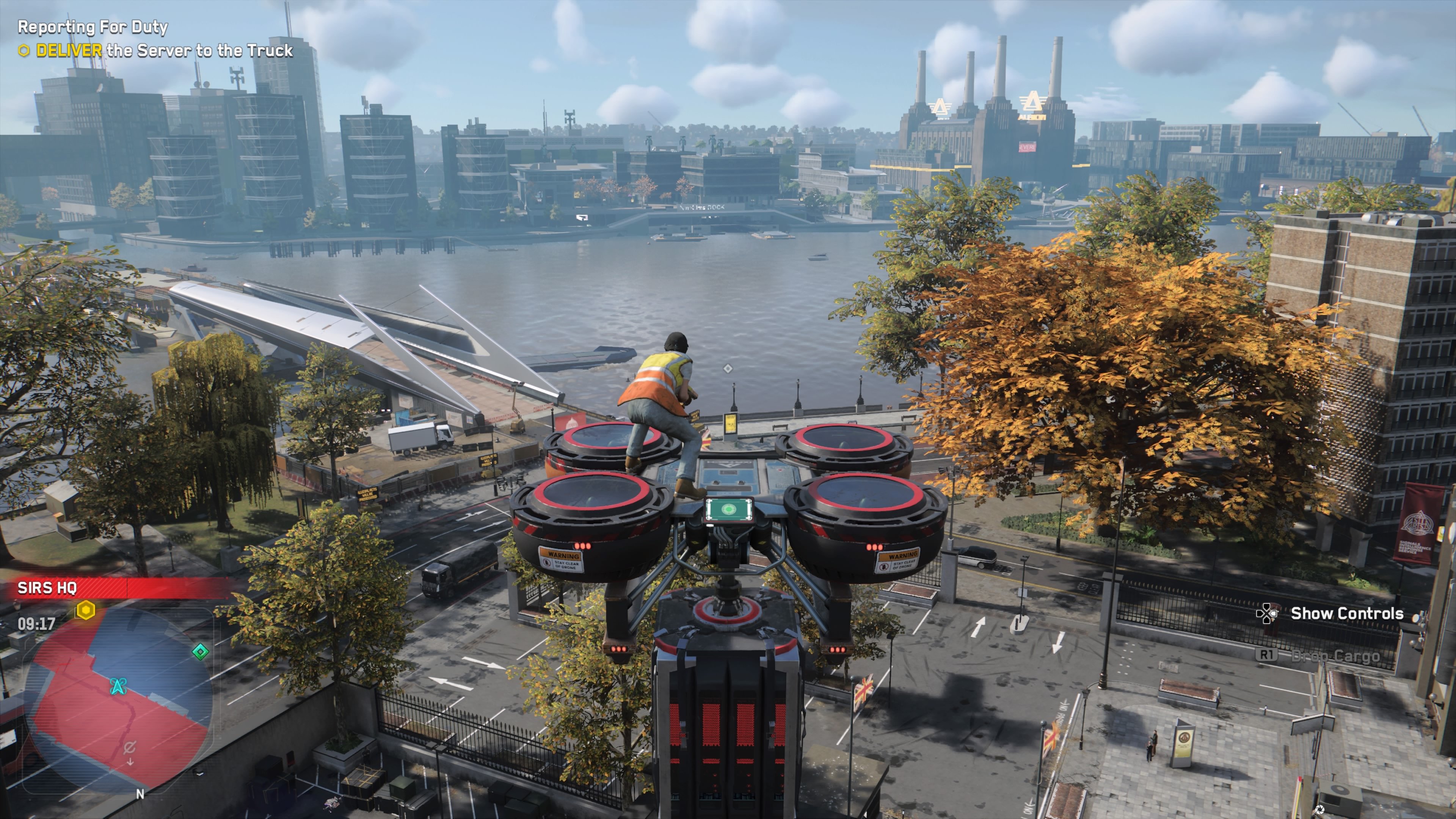 Ironically, the lack of a true “lead” actually hurts Legion‘s immersion. Despite his iconic hat, Aiden Pearce was an insufferable bore, but stripped of the charisma of characters such as Watch Dogs 2’s Marcus Holloway and his hipster kidz, Legion leaves us with a band of mostly interchangeable nobodies. This often leaves player characters feeling hollow and NPC-like, rather than a passionate posse of freedom fighters. Case in point: the first character to draw any real emotion from me was a sad, broken Spiderbot, still trying its very best to be useful despite its pitiful state. Godspeed, little Spiderbot.

This dissonance affects Legion‘s campaign in multiple ways. Everybody had a chuckle at the “spy granny” trailer – sure – but in reality, this party rarely feels like an undercover, state-breaking unit. I was able to play half the game as a lofty, high society woman – Ascot hat, lace gloves, heels, the works – who I’m supposed to buy is also a stunt driving specialist, an expert gunslinger, and can take down waves of special forces agents in hand-to-hand combat like she’s Amanda Nunes.

It’s a juxtaposition that Legion struggles with for its duration. One minute you’re being told immigrants are being kidnapped and butchered for their organs, and the next Miss Money-Sterling and her Chanel suit just won a pit-fighting tournament on the dark web. Titles such as Grand Theft Auto and Saint’s Row get away with blending their dark violence with off-the-wall wackiness due to their satirical, stylized worlds. But Watch Dogs‘ narrative is so grim and po-faced, rolling out themes of police brutality, human trafficking, terrorist atrocities, and political fascism, that it doesn’t earn the same tonal conflict. 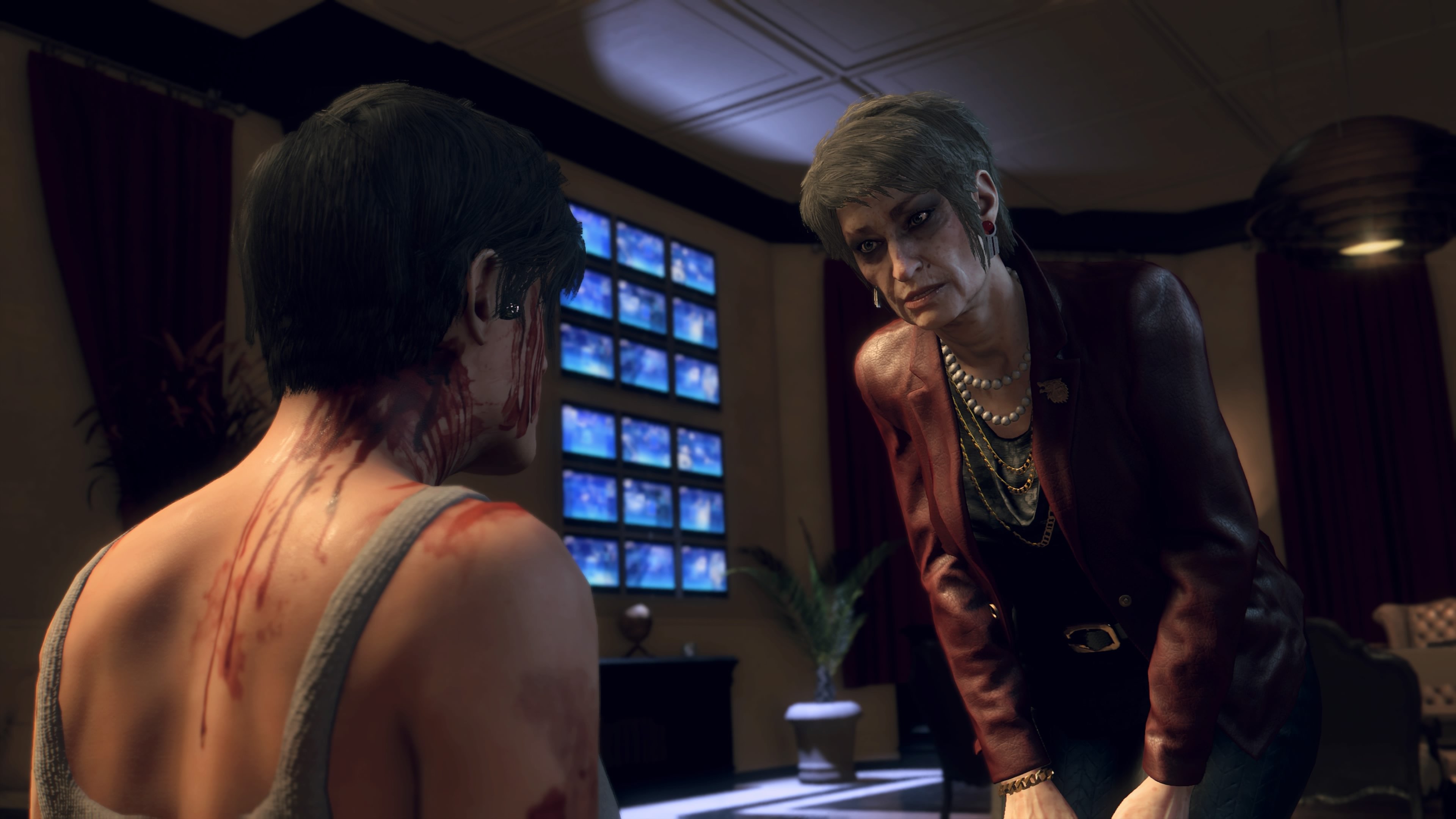 Where Watch Dogs: Legion does put one in the net, however, is in the incredible work done in recreating The Big Smoke. The London of Legion is stunningly authentic and brilliantly detailed, from the bright lights of Piccadilly Circus and the pomp of Buckingham Palace and Big Ben to the grimier underbelly rarely shown when U.S. sitcoms do an obligatory vacation episode. The developers have done an amazing job in replicating the bustling metropolis of modern London, tweaking it just enough to make the city feel that little bit more dangerous – a nightmarish vision that feels depressingly plausible.

Equally as effective are Legion‘s visual effects, featuring some of the best color, lighting, shadow, and weather effects we’ve seen in an open-world title since Batman: Arkham Knight. The Watch Dogs: Legion vista more than holds its own against the impending next-generation in both shine and scale. By comparison, the city’s inhabitants are a little rougher around the edges visually – and feature a wide spectrum of voice-acting ranging from solid to hilarious. At one point I had a construction worker on my squad with the face of a 30-year-old but the voice of an 80-year-old.

Legion ran acceptably on PS4 Pro but was still fettered with small, irritating bugs. While the reported save corruption and Xbox-bricking flaws have now apparently been fixed, I still encountered multiple issues. These include unresponsive button prompts, missions failing to trigger/end, two full crashes, and endless NPC oddities, such as a screaming woman having a fight in the street with nobody… Come to think of it, maybe that just added to the city’s overall authenticity. 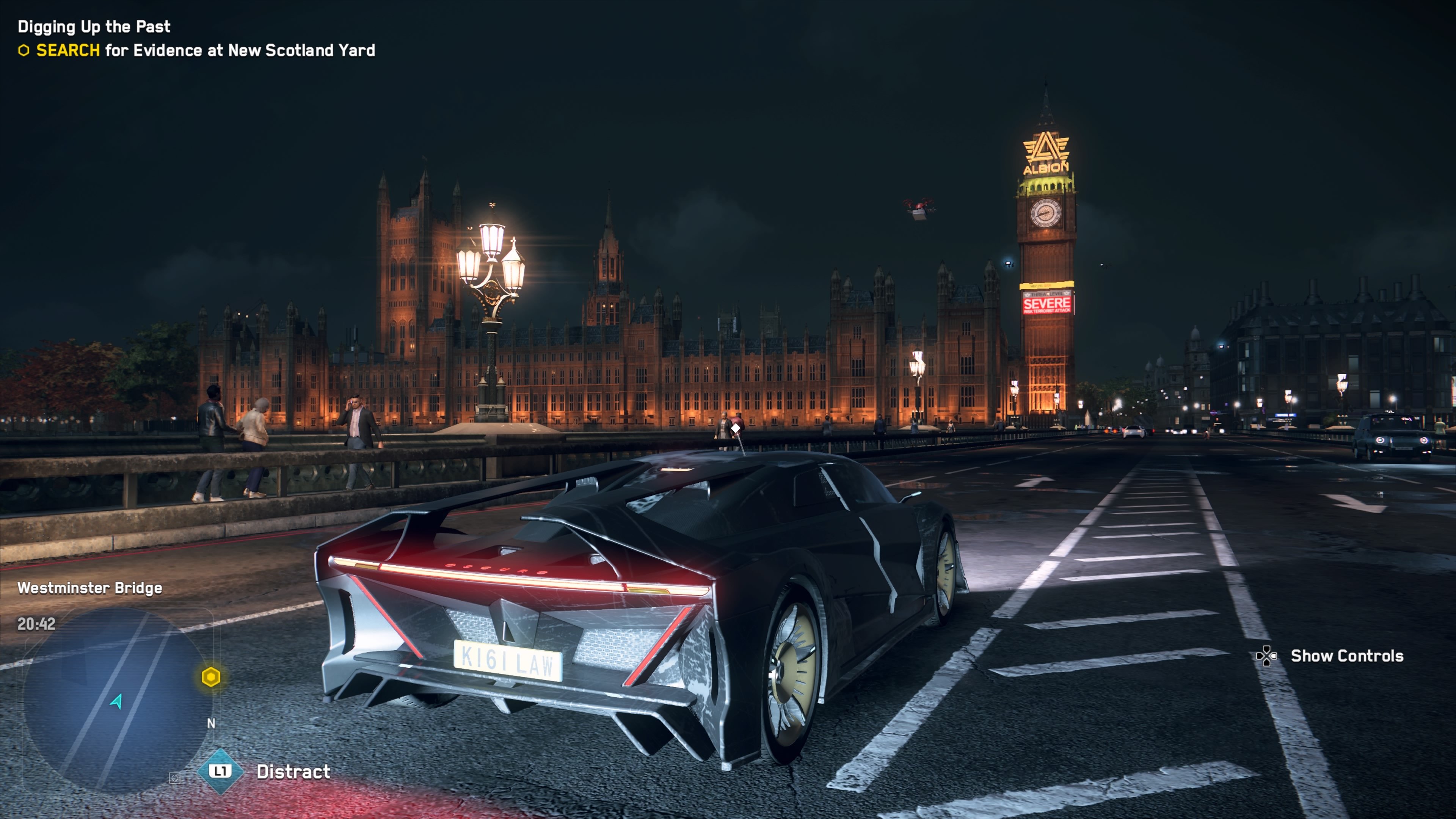 Watch Dogs: Legion certainly isn’t a bad game by any stretch, but rarely is it engaging, and it is hardly ever simply “fun.” Despite its multi-man concepts and intriguing narrative, Legion slots into the Ubisoft oeuvre of sequels, bringing little new to the table and feeling repetitious a mere third into its 20-30 hour run-time. Watch Dogs: Legion is as serviceable as a-n-other open-world crime sim, only really hitting highs when the player steps away from the main thread to spread a little extra-curricular chaos.

As a new generation of gaming dawns, one can’t help but wonder what Ubisoft has planned for its flagship franchises. It appears that the Rainbow Six team is already taking initiative and switching things up with the upcoming Rainbow Six: Quarantine. But what of the Assassin’s Creeds, Far Crys, and Watch Dogs of the world? In the latter’s case, it feels like the well is running dry, and if DedSec are intent on Hacking the Planet into the next decade, then they might need to download some new tricks.

For all its themes of rule-breaking anarchy, Watch Dogs: Legion toes the line as a formulaic, though ambitious, open-world adventure. While it boasts one of the most visually exciting and stunningly authentic locales in the genre’s history, Watch Dogs: Legion‘s gameplay is mechanical, over-familiar, and repetitive, struggling to capture the exciting promise of a fist-pumping, system-smashing revolution.