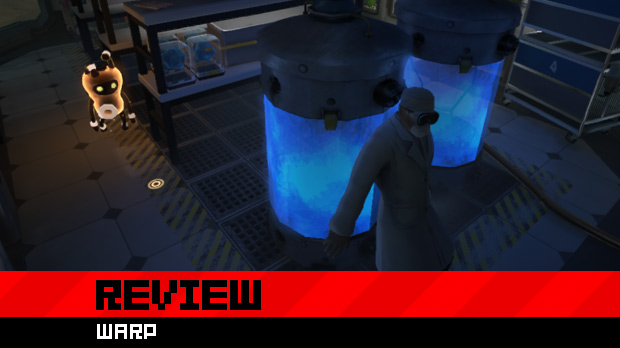 Xbox Live Arcade’s House Party kicked off with Warp, a stealth-centric puzzle-platforming title with a charming yet violent aesthetic. With a somewhat creative way of adding a breath of fresh air to the top-down stealth genre by introducing a telefragging alien, Warp seems ideally suited to the digital distribution platforms and its share of quirky games.

Alas, there is a difference between potential and execution. 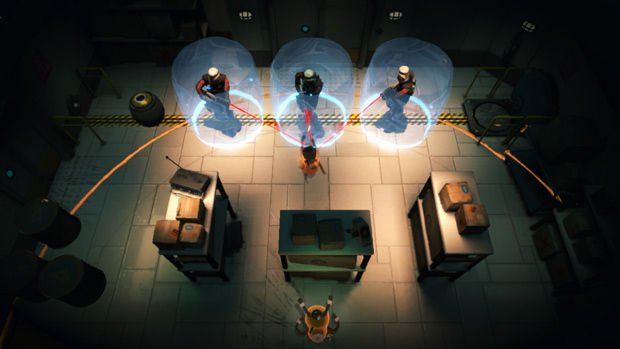 After being captured and submitted to various control orientation tests in a series of chambers, the little alien protagonist in Warp escapes his confines with a single goal on his mind: find a way off the research facility, find the means to do so, and optionally murder everyone in his (or her?) path.

While unarmed, the critter you control can warp short distances through solid objects, and even inside of them. That includes humans. Once inside, you can wiggle your left analog stick around until they explode, possibly at the cost of your left hand’s motor functions decades from now. Along the way you’ll unlock new powers by absorbing various other aliens held in containment at the facility. Doing so allows you to project an “echo” decoy which can be used to swap your creature’s location with an object highlighted by your echo, or launch objects across distances so you can then warp into them.

Practically all of the puzzles in Warp revolve around these basic mechanics. You move objects around by interchanging them with your position, warp into soldiers or turrets to dispose of them, or launch objects into wall-mounted “buttons.” It’s a simple concept that is supported by a drive for exploration to hunt down film canisters to destroy, and tiny blobs called Grubs that let you unlock special skills or traits to help you progress more easily. It’s also a concept that is pretty fun to play, in theory.

In practice, however, the means of doing all these things suffers from the game’s lackluster controls. A tiny indicator shows you where you’ll end up when you warp, but aiming has to be pretty precise at times. If you’re not careful, you end up warping right next to a soldier instead of inside of him, or just off a ledge so you fall to your doom. Although you get the hang of this over the course of the game, it never fails to feel like you are trying to aim a single shot at an enemy in a twin-stick shooter.

Sometimes you’ll die because you aimed poorly. Other times you’ll die because you were moving a decoy, the decoy got destroyed, and subsequently you accidentally moved your warping alien directly into a hazard. Then there are times when a section pressures you to perform quickly, even though you can’t always tell where you’ll end up under the stress of impending death. Thankfully, checkpoints abound and there are only a few sections where you have to replay more than a single frustrating segment. Which is great, because you’ll die a lot. However, every time you die you have to sit through a five-second loading screen, which isn’t that long but definitely long enough to make every death more annoying than it already is when plenty of deaths occur due to the loose controls. 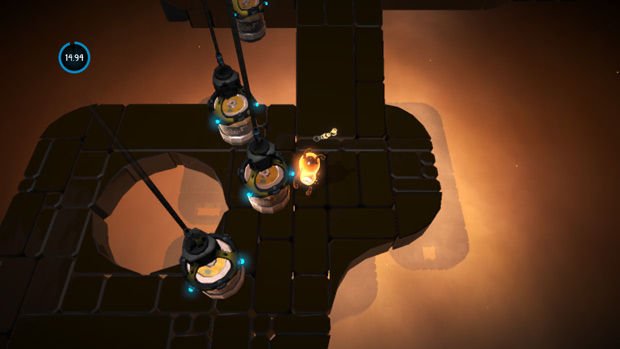 What makes it especially odd that a lot of the issues found in Warp actually exist is the level of polish found in nearly every other aspect. The visual style is a clean mix of Team Fortress 2 and Evil Genius cartoon-y style graphics. Almost every new gameplay concept is expertly introduced to the player, with a minimal and effective interface to boot. Then there is the humor, which pops up here and there and adds a certain level of charm to the non-human characters.

Shiny visuals and polished tutorials can’t hide some of the fundamental problems with Warp, though. Besides the controls working against the player at the most important of times, there is a certain soullessness to Warp that is hard to explain. You’ll find yourself going through the motions, moving from segment to segment with the intention of having fun, yet finding little of it. Sure, there is a level of challenge stemming from the puzzles and finding the best way to perform a mix of action under a time restraint, but you’ll be hard pressed to really care about any of it.

Part of it might be due to the somewhat problematic goal of feeling attached to your creature. It devours defenseless other aliens for its own gain, feels committed to exploding every human it can since statistics are tracked and compared to your friends at the bottom of the screen, and generally makes you act like a dick to your captors. Captors they might be, but most of your victims probably just work there to support their families. They even scream at you, “What did I do to deserve this?” 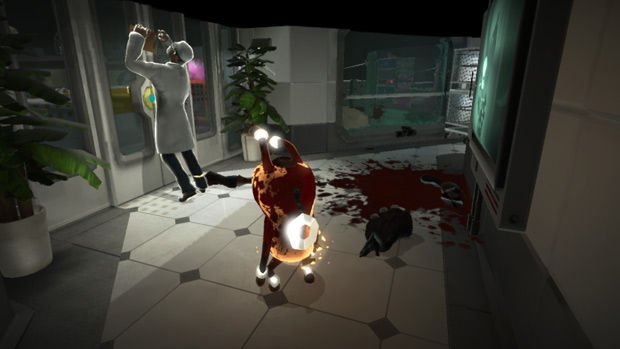 Whatever frustrations you may or may not have while playing it, they culminate in the game’s final level and boss. Because it wasn’t enough to make you hope for the best when you are trying to control Warp‘s alien, someone decided it would be even more fun to make the level itself rock back and forth, bumping you into inadvertent deaths and yet another loading screen until you are ready to scream.

If you do commit to completion, you’ll unlock access to a number of challenge levels throughout the game that can be played again from the main menu. These give you bonus Grubs if you perform well enough, and high scores to celebrate on leaderboards. The Grubs themselves can give you some nice upgrades that save you a lot of trouble, particularly the upgrades that let you walk faster or allow you to turn your decoy into a mine that can knock out a troublesome shielded guard. As useful as they are, Warp tries its best to make you forget you even can upgrade — and you can easily complete the game without them if you want to.

Whether or not it’s worth even starting will depend on how much you like this subgenre of stealth gameplay and on how willing you are to overlook its faults. As much as Warp‘s presentation gives you the illusion that you are playing a charming game full of personality, a lot of the initial goodwill and attachment to the cute critter protagonist is slowly eroded by your actions and the problematic controls. In the end, all that is left at your disposal is a virtual representation of your imminent failure and repetitive demise.