Warhammer 40,000, the tabletop game in which sci-fi depictions of fantasy creatures battle it out in a grim, perpetually violent future, lends itself well to the world of videogames. In fact, one can be quite certain it’s inspired a fair few.

Games Workshop’s universe of battle-hardened space marines, reality-warping daemons and gruesome aliens makes for the perfect game fodder, and while we’ve seen some solid 40K titles in the past, none have truly ventured into the bloodshed and brutality of the ground-level warzone.

We’ve had plenty of strategy games, such as Relic Entertainment’s Dawn of War series, but outside of the critically unpopular Fire Warrior, we’ve never had a chance to feel what it’s like to be one of those soldiers who die on folding tables and ironing boards every single day.

That is, until now. 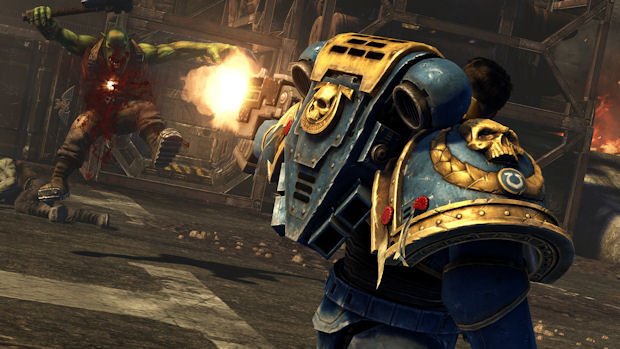 Warhammer 40,000: Space Marine‘s campaign tells the tale of Captain Titus, a hero of the Ultramarines Space Marine chapter. His squad is sent to a Forge World (essentially a huge, planet-sized factory) in order to deal with an invading mob of Orks and liberate the strategically crucial location. Unfortunately, all is not as it seems. The Chaos Space Marines show up, and Titus is locked in a three-way struggle for the planet, along with the experimental new energy source that it houses.

Space Marine‘s story is not exactly deep, and in fact it only gets interesting at the end, where it is aggravatingly cut short by a sequel hook. That said, it takes the “grimdark” world of Warhammer 40,000 very seriously, and does an excellent job of representing the three races that drive its story. The Space Marines, Orks and Chaos forces look and sound incredibly authentic, presenting perhaps the best representation of 40K forces that I’ve seen in any entertainment medium.

While the narrative is a little unfulfilling, one cannot say the same for Space Marine‘s combat. Expertly merging melee hack n’ slash violence with ranged warfare, Relic Entertainment has created a surprisingly tight, fluid action experience. I’m rather impressed by how well the sword-swinging and gun-slinging work together, as Titus swiftly moves from one style of play to the other. Using the shoulder buttons for guns and the face buttons for melee weapons, controls are streamlined and intuitive, making for a versatile game in spite of its inherent simplicity. 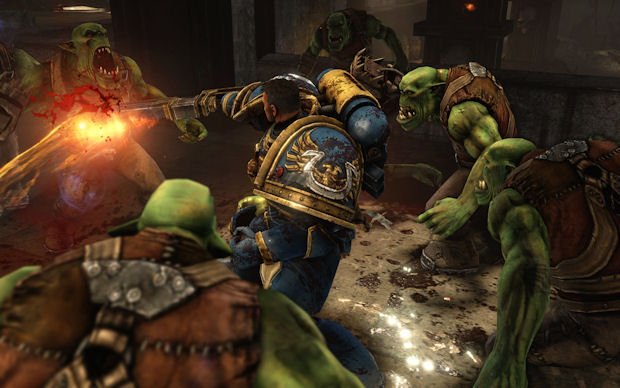 There’s also a solid range of weapons to choose from, all lovingly taken from the tabletop experience. Ranged weapons include the standard rapid-fire Bolter and sniper-esque Lascannon, as well as more exotic weapons such as the Melta Gun — which essentially fires an all-encompassing mass of energy at anything stood within ten feet ahead of the player, reducing enemies to paste. Players use the left trigger to aim and the right to fire, as one would in a standard third-person shooter, although some weapons are best suited to hip-firing, “spray and pray” tactics, especially when foes get close.

Melee weapons come in four varieties — the weak combat sword, the one-handed chainsword and force axe, and the two-handed thunder hammer. Titus performs standard melee attacks with one button and stun attacks with the other, while incredibly simplistic combos (hit, hit, stun and hit, hit, hit, stun) are used to create more effective stun blows. If an enemy is stunned enough to become dazed, Titus can perform a brutal finishing move. Executions are used to replenish health, and look ridiculously cool, with finishers determined by the enemy being fought and the weapon used — for example, fighting a Bloodletter Daemon with a chainsword will see Titus grab it from behind and pull the chainsword through its throat. Yes, it’s very pleasant.

Titus has a regenerating shield, but once it’s depleted, he loses health, which can only be recovered using executions or activating Fury. The Fury meter grows with each successful attack, and once activated, Titus regains HP while also dealing more damage. As the campaign progresses, he unlocks the ability to slow-down time while aiming his ranged weapons, too. Throughout the game, various upgrades are unlocked, although there are no real “RPG” elements to the game — Titus gains upgrades at predetermined points, and they’re only light enhancements at best. 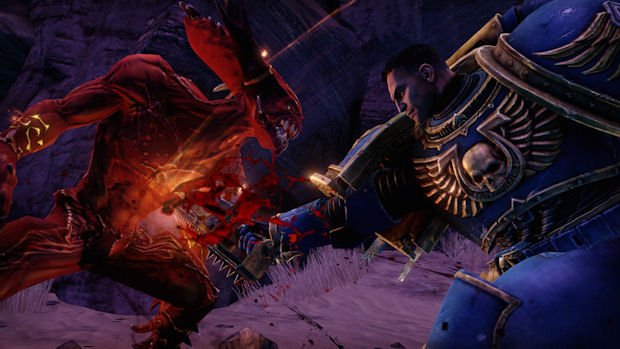 Space Marine does a commendable job of throwing one into the thick of battle. Thinning an encroaching horde with gunfire before diving in with a chainsword makes for some engaging combat, and things can get quite challenging. Prioritizing targets is essential, as knowing when to take out the ranged opponents and when to deal with the melee troops is often the key to surviving. Tougher enemies, such as shielded Ork ‘Ardboys and Chaos Space Marines, need to be dealt with above all else.

The combat system certainly has a few issues, though. For one thing, the deliberate lack of a cover system might be authentic when dealing with fearless Space Marines, but it can make for some frustrating fights. The game often places ranged enemies far beyond reach, and firefights become pretty tricky when all you have is a weak dodge roll to avoid machine gun sprays and viciously efficient explosives. Likewise, the lack of appreciable defenses in melee combat means that Titus takes huge amounts of damage when fighting even a small group of enemies — a problem made worse by the lengthy execution animations and the fact that he’ll still lose health while performing them.

Despite these annoyances, Relic has built a fighting system that’s far more elegant than I expected it to be, and for that it deserves praise. There’s a satisfying barbarity to the combat, with bolter fire tearing enemies to shreds and thunder hammers crushing Chaos Marines in their armor with beautiful severity. What I truly love is just how much like a genetically enhanced superhuman the game makes one feel. The screen shakes as Titus runs (an effect thankfully toned down from earlier builds), melee blows feel heavy and commanding, while the huge, audacious guns are a pleasure to use. Titus even enjoys a few levels with an Assault Jump Pack, allowing him to leap high into the air and then smash back down, devastatingwhole crowds caught in the blast. 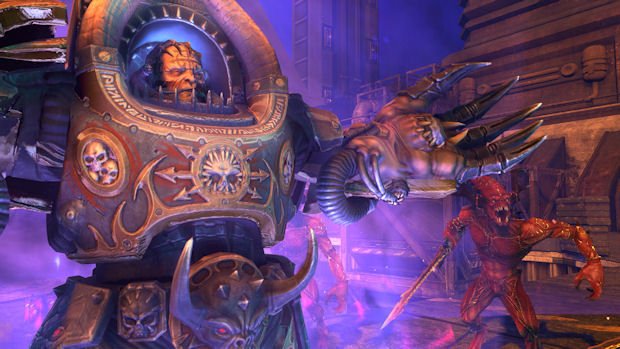 The biggest downside to the campaign is that it is a very short affair. A player storming through the game will likely be done within six hours, and while I found the gameplay fun enough to want to play it again, others will likely feel a little unsatisfied by the game’s sudden conclusion and rather cheap cliffhanger.

Fortunately, there is a robust multiplayer mode to keep things spicy, and it’s shockingly good. Two traditional game modes — team deathmatch and capture point — pit Space Marines and Chaos Marines against each other across a modest selection of maps. There are three classes to choose from — the jack-of-all trades Tactical/Chaos class, the melee-based, speedy Assault/Raptor and the ranged Devastator/Havoc troop. Players can switch classes between deaths, and some maps are more advantageous to certain characters, encouraging players to swap out characters rather than stick with a single type.

Each class has a range of unique weapons and perks (earned with level increases) that enhance their combat prowess. Personally, I love the Devastator/Havoc, who can roll into battle with a heavy bolter (a machine gun the size of a motorcycle) and take a stationary braced stance to chew up the opposition. That said, the Tactical class’ flexibility and the Assault’s jump pack make them equally effective choices, and I’ve noted that players seem to be using a healthy variety of characters, rather than forcing games to become huge jump pack contests. 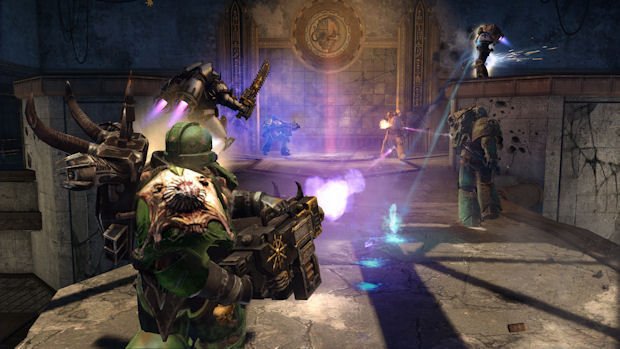 Classes are mostly well balanced, but I do think the Assault/Raptor class is a little overpowered and could possibly do with a reduced health meter to offset its huge close-quarter advantage. That said, no one class has a supreme advantage over another, and the maps are also really well designed, with sensible spawn points and excellent killzones that often house dramatic back-and-forth battles. I’d certainly have liked a few extras classes, too. Chaplains/Dark Apostles could have been cool healing/buff classes, and I’d love a Librarian/Sorcerer class as well. Perhaps something to think about for the future.

Players get to fully customize their characters using almost every available paint color that Games Workshop produces. Each armor piece has a range of unlockable variants that players can use to create their perfect Space or Chaos Marine, and daub them in whatever color they wish. Relic has also gone to the trouble of including a huge range of pre-set, canonical Marine Chapter and Chaos Warband color schemes, so if you want to represent the Space Marine Salamanders or Chaos Alpha Legion, their schemes are readily included. I’m just a little disappointed that I had to cobble together my own Thousand Sons warrior, but that’s just me being pedantic. 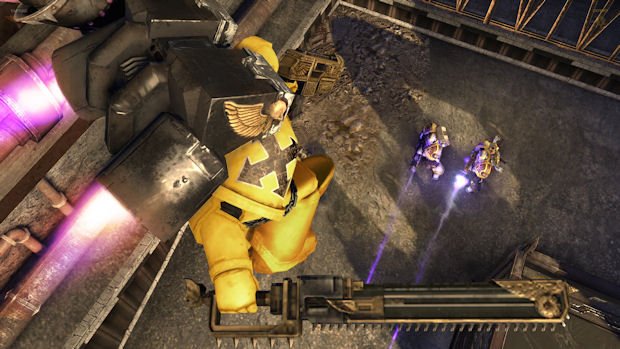 Warhammer 40,000: Space Marine is a wonderfully tight production that brings an authenticity and intensity befitting Games Workshop’s beloved universe. While there are some vexing design decisions and the campaign is disappointingly brief, there’s nevertheless plenty of content to get stuck into and exquisitely savage combat on offer. With its bloodthirsty gameplay, heartfelt atmosphere, and expectantly flowing mixture of ranged and brawling warfare, Space Marine is an exemplary entry into the action genre that will satisfy fans of the source material, and possibly make new fans of those less familiar.