This is what it was like before the MCU

It is really easy to tear Venom apart. There are a myriad of issues with it from casting to screenplay to plotting to… well, everything. Superhero movies have come a long way in the past ten years, and Venom feels like it learned almost nothing from any of them — a phase one MCU film with none of the hope or aspiration of things to come. It isn’t really a good movie.

It’s fun. It just is. It’s one of those movies that’s dumb as hell, but you don’t hate it for it. It’s got this campy, throwback feeling that plays stupidly earnest. It’s not a good movie at all, but I’m not sure it really wanted to be.

Venom, as a character, is a Spider-Man villain created in the late 80s to be all edgy and cool. Looking back the character was a bit cheesy, a bit emo, and a whole lot of 90s. The symbiote was closely tied to Spidey as it first came to be as a new costume for the hero. However, thanks to contracts and rights ownership Spider-Man is nowhere to be seen in this Sony (in “association” with Marvel) production, and so we get an Eddie Brock (Tom Hardy) living in San Francisco with his fiancee Anne Weying (Michelle Williams) and working as an investigative journalist. It’s this work that brings him to cover Carlton Drake (Riz Ahmed), who is up to something shady involving multiple alien symbiotes he discovered in space during an evil plan to do evil. The symbiote eventually absorbs into Brock and we get the big, sharped-tooth, tar-like blob of anti-hero the film is about.

I mean there really isn’t that much more too it. The plot is basic AF (that’s what the cool kids say now). We’re talking copy-and-paste-from-almost-every-early-Marvel-film-there-is basic. The first half is all origin stuff with Brock being just Brock and Venom being just a black blob of… stuff. Comic book movies have moved past the origin story, and yet Venom is so committed to it we don’t even get to see the full “costume” for at least 20 minutes. It’s so pre-Iron Man in its thinking that it’s kind of refreshing. There’s no bigger picture here, no subtext, no creativity; it’s just kind of simple storytelling that Venom somehow revels in. 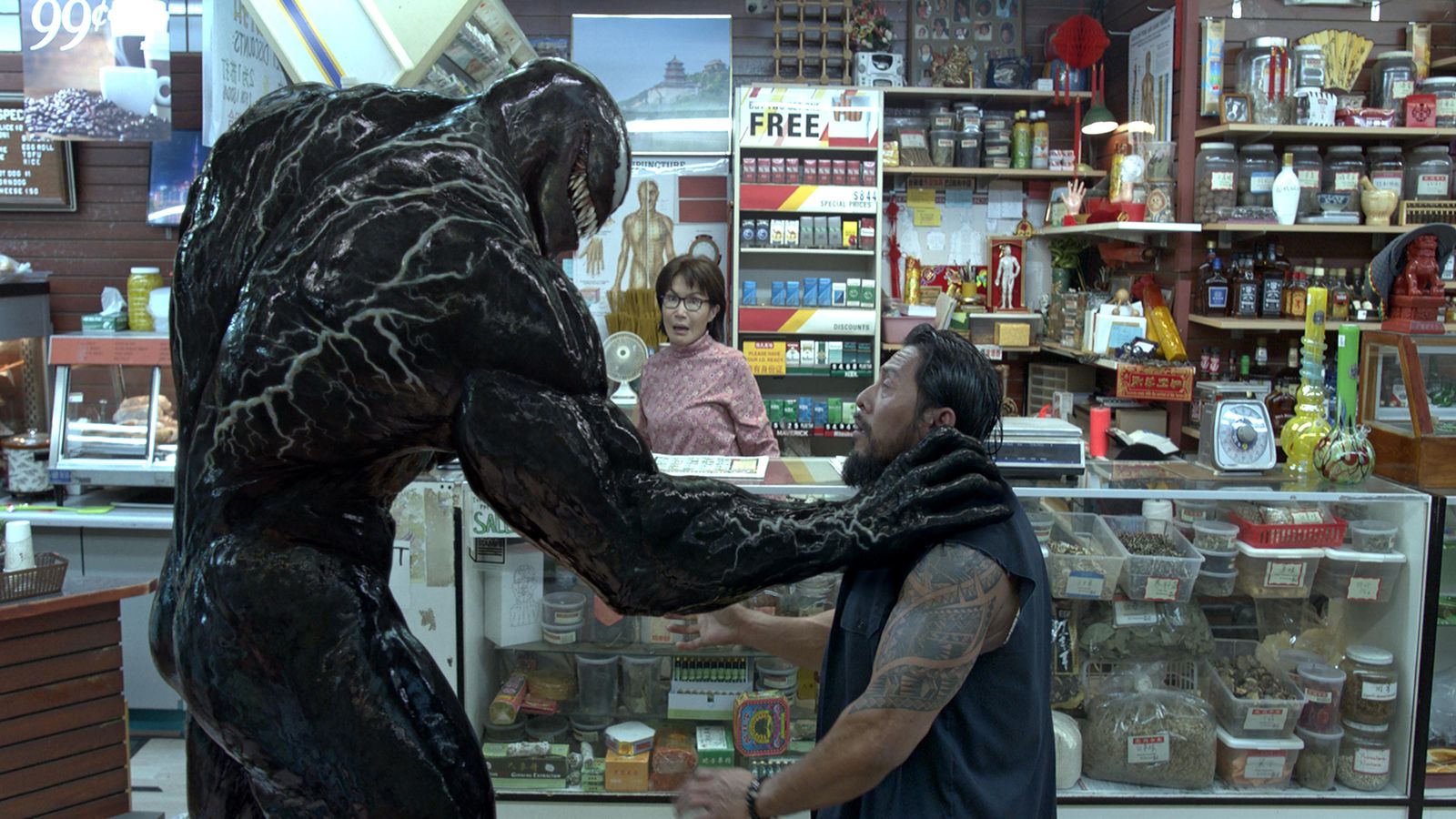 Part of that is just how wonderfully campy Brock and Venom are together. It’s not evil Peter Parker campy, it’s an earnest straight camp, which is the best kind. Hardy spews both Brock and Venom’s lines like he’s vying for an Oscar nod, especially when they’re talking to each other. I’m not sure what direction Hardy was given for the performance, but as the movie goes on it just gets more and more absurd. It begins working because it’s odd and Hardy is so committed to it that you can’t help but enjoy it. In fact, even the infamous “turd in the wind” line actually plays pretty well in the context of the film’s overall dialog. By the point it’s uttered you happily accept it’s something Venom would say.

It should be said that there are plenty of lackluster elements of the film that could easily put someone off. Venom’s turn into an anti-hero makes little sense, but as the main driver of the latter half of the film, it’s kind of important. It’s like there’s an entire section of the movie missing that makes their relationship into something more. It’s even worse for any other character in the movie. They are all relegated to cliches, tropes, and evil monologing of horrific proportions. Poor Ahmed barely gets to do anything but stare at the screen sinisterly, and Willaims is nothing more than a MacGuffin (and an excuse for some fan service). 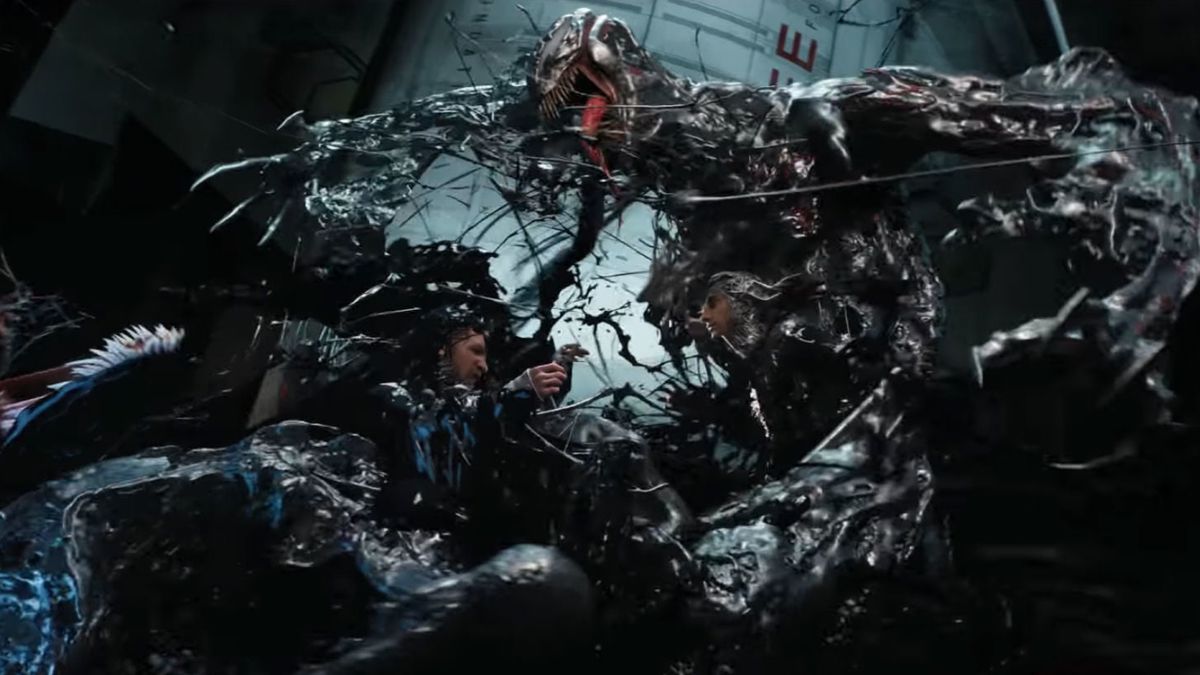 Part of the problem, and yet also the solution, is Fleischer’s pacing of the movie. It never stops, jumping from one set piece to another until we’re at the end watching two slightly different colored alien blobs fight each other to the death for no apparent reason other than that’s how superhero movies end. Yet, because of this frantic pace, it’s hard to really think about any of the movie. You’re just strapped in for the ride and that ride starts to get fun. Most of the action, aside from the aforementioned final fight, works well, and Fleischer knows that the only thing really going for the film is Hardy’s over-the-top Venom portrayal so he just sticks with it and sprints through the rest of the movie. I’m not sure if it’s genius or idiocy, but it works.

What doesn’t work at all is most of the CGI. Venom is truly the one who looks like a turd in the wind. We’re not talking Green Lantern levels of ugly, but we’re close. An ever-shifting, black blob must be hard to animate, but while the dated feeling of the rest of the movie gives it some of its fun and camp, it’s not a good look for your special effects.

If Venom had come out ten years ago, audiences probably would have applauded it. It’s like Sony missed every lesson learned over the past ten years of superhero movie making, and just went all out with what used to work. It’s so ill-informed in its decisions that it turns into a weird parody. If one were being generous one could call it a campy deconstruction of the genre that tears away everything but the most basic elements to expose just how redundant comic book movies are. That’s probably being a little too generous to a movie where our hero bites off the heads of people so let’s just say this: Venom isn’t good, but Venom was never meant to be good anyway.