Riot Games is one of the wildest developers in the business right now. Explosive League of Legends success, lawsuits, Tencent ownership; it feels like it’s been on a series of ups and downs more than any other studio in recent memory. But after relying solely on one behemoth of a game for most of the company’s lifecycle, it’s time to move forward.

We got the card-based Runeterra last month and now, the shooter Valorant. Riot has the money to see these flights of fancies through, but I’m not so sure the latter is going to be the total shakeup they intend it to be. 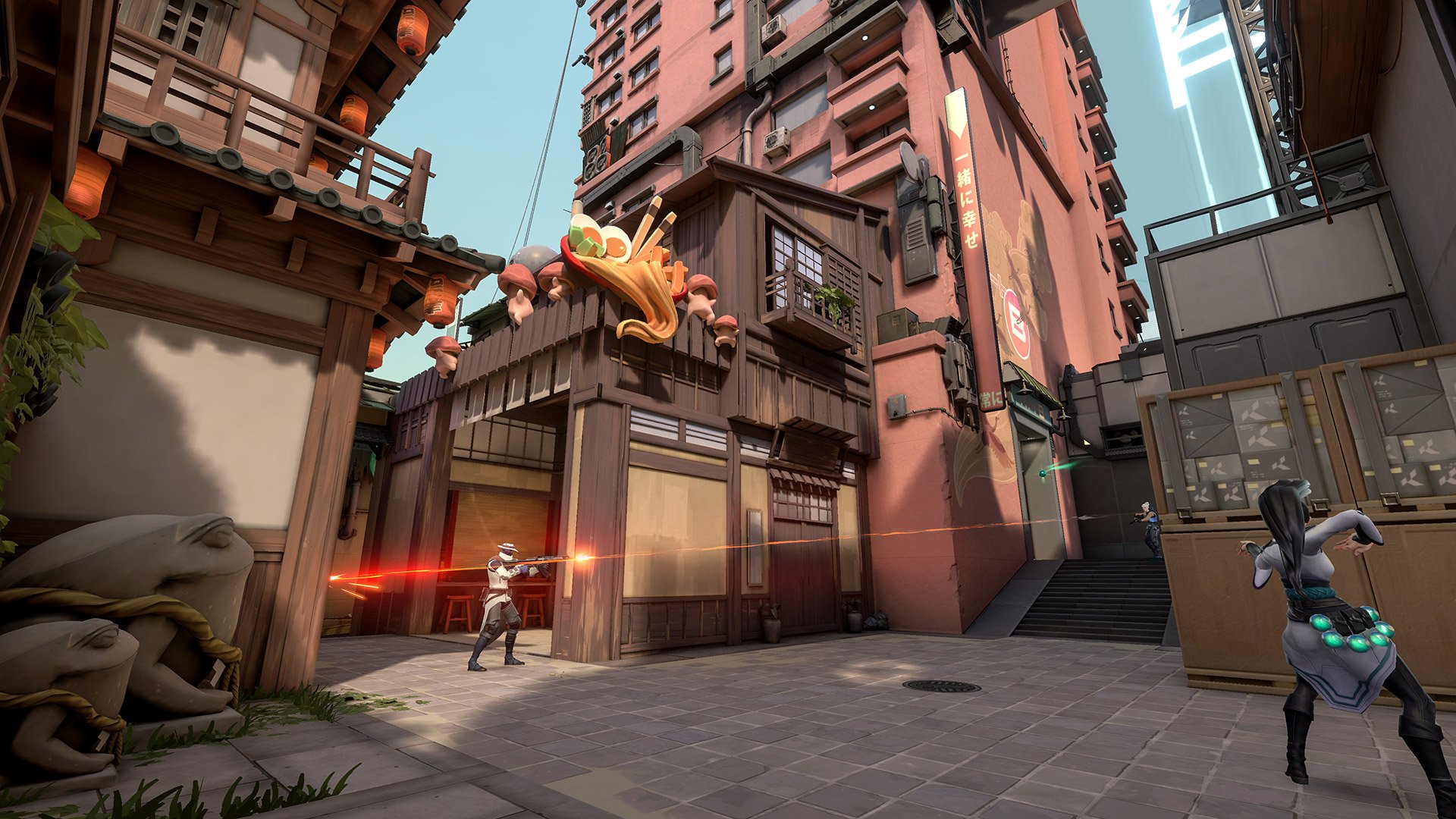 Valorant‘s flow is easy to explain, but infinitely tougher to master in practice.

Players engage each other in a round-by-round fashion as two teams of five, “buying” very traditional FPS weaponry between rounds like pistols, shotguns, SMGs, machineguns, snipers and assault rifles. Your goal on offense is to plant a bomb (spike) in preset enemy zones (A/B/C or A/B): as defense, you need to stop them and at halftime, you swap sides. This is a hero (“Agent”) shooter, so abilities and ultimates (like resurrection or a giant orbital area-of-effect beam) do matter, but it’s mostly the fundamentals that will raise your rank.

Shift-walking to prevent noisy footsteps. Pixel-tight mouse aiming. Very quick time-to-kill awareness that leads to one-hit headshots. This is what Valorant is all about first and foremost, the rest is just the Overwatch dressing on this Counter-Strike salad. It’s enough to scare away a lot of people, and you’d be right to walk away if that’s not what you want out of a shooter in 2020. But as someone who has really dug into it for the past few months since the beta period, there’s a lot to like here.

Valorant rewards multiple styles of play: control, aggression, defense and scouting. All of these archetypes are hardcoded in each Agent’s DNA, so you can pick your poison and adjust accordingly. I’ve been playing a lot of Jett, who can sneak around and jump over walls with one of her abilities. Others have a more accepted “rotation,” like Brimstone who generally calls down vision-blocking smoke from the sky at the start of each round: though all of them have a learning curve involved and a role to serve.

While knowing how every character works is important (so you don’t get outwitted when you’re matched up with a teleport-capable Agent), natural born FPS players will acclimate very quickly to Valorant‘s tight shooting foundation. There’s plenty of chances to shine, like pulling off clutch sniper shots while defending the point as the last player standing. It feels like every game has a lot of great intense moments, and there’s plenty of opportunities to “carry” your team. It’ll appeal to a certain type of person who is sick of the obscenely long time-to-kill systems in modern shooters.

You’ll need to strap in and go all-in, too, because Valorant requires dedication. Each and every game is very long, focusing on a “best of 24” (!) sequence. It can be both exhausting and exhilarating, or just plain exhausting. You really get to know your teammates through these long hauls, and keeping things spike-related allows the action to stay on target and not get too crazy like some other hero shooters. Spike Rush (an additional mode where everyone on offense gets a bomb) is around 10 minutes, but isn’t the main attraction.

Most of the time you’re going to be looking at hands and a floating gun, but I’m still not feeling a few of the character designs. There’s 11 at this point (one was introduced at launch) and four maps. That’s going to feel light, but again, it’s going to take some time to really pick up on how to play them all: much less unlock everyone (more on that later). Riot spent so much time fine-tuning the fundamentals I mentioned earlier and not enough time building the world: that’s one thing they really did right with League out of the gate.

Part of the problem is the drab visual style. The game’s twisted aether aesthetic has improved some since the alpha, with a lot of the environments getting a visual pass to smooth over the details. Yet, the way the stages are laid out, it can feel very manufactured. Random boxes are placed strategically to create interesting firefights or enable some Agent’s skills, but there’s very little life or theme in them a lot of the time.

Split is probably my favorite map as it’s more intimate, while Ascent and Bind feel too similar to one another on several levels (Bind has an interesting industrial visual to it from a bird’s eye view and employs a “no mid” mentality, but is a bit more boring in action). Haven, on the other hand, has more open spaces than the others, which helps define it. Riot doesn’t want to seem to shake things up too much though, preferring to keep the maps simple and uniform to the delight of pro players. Everyone else on the other hand, may find the homogenization too much after a few weeks of play. 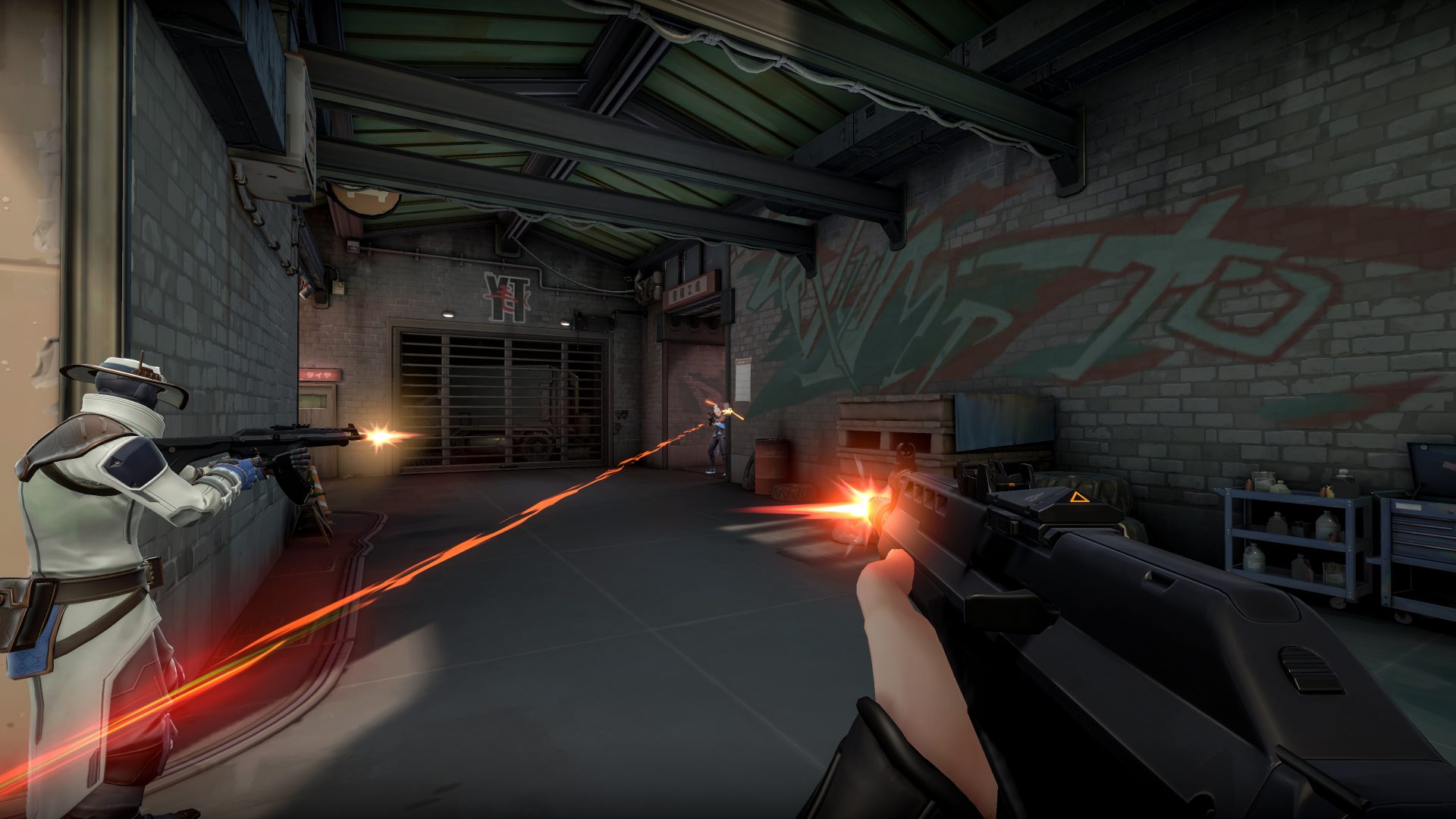 Getting back to the fundamentals, Valorant is fairly immaculate when it comes to visual options and customization: as Riot is marketing this to a hardcore crowd after all. Pretty much all the bells and whistles for resolution options (and monitor swapping) are available, as well as multiple FPS options (even for menu throttling). Crosshair customization its own menu (with no less than 20 options) and you can show every stat, including FPS, packet loss and server tick rate (as text, a graph or both). In my experience, Riot’s aim to get 128-tick dedicated servers and 35ms ping for “70% of players” has mostly been upheld, with exceptions for at least one player a game in the ping department. Still, I didn’t experience any major issues with online play even during the beta period, much less the full launch. Your mileage may vary.

The anti-cheat technology is far tougher of a sell. This time around Riot has created a proprietary engine called Vanguard, which has been making the rounds in headlines for weeks. The short of it? It lives on your PC even when you’re not playing the game. Once you’re done playing you can disable it, but you need to re-enable it before you play again by rebooting your PC. The client-side part would be hard enough for some players, but the kernel-side protection: most would consider it abhorrent. Now, this approach is not new (Apex Legends, PUBG and Siege use it, a few of which have existed for years), but it may still make some people uncomfortable. If that’s the case, don’t deal with it.

In true Riot fashion Valorant is free-to-play, and the store, for now, is mostly harmless. Weapon skins are the main draw running off “Valorant Points,” which have a current $5 to 475 exchange rate (minus bonuses for higher amounts). Some skins are 875 points, others are bundled for a lot more with exclusive rewards like sprays and logos. There are no loot boxes, just a season pass, which is 1000 points ($9.99 will get you 950 + 50 bonus points). Characters are all free, but you need to play to unlock more, with five available by default. One big pain for brand new players who only have the starting five: if you don’t lock in fast and get the character you want, you’re stuck with the fifth choice. Alternatively, if you use your first in-game “buy” for a character you end up hating, tough.

As a hardcore shooter fan since the ’90s, Valorant feels very well designed, and provides me with a rush I haven’t gotten out of so many other big genre games in the past five years. But Valorant feels like it was meticulously designed in a laboratory to a fault. It’s fitting given that Riot has over a decade of data and esports experience, but the sterile feel of it does impact my decision to play it more regularly.

[This review is based on a build of the free-to-play game. A review account was provided, but not used for this assessment.]