Being one that writes about and reviews games for a living, I tend to hear the same kinds of questions from new acquaintances. One of the most common relates to what ‘good games’ are available for a particular system. Because of this, when people ask me what they should get, I always have a mental list prepared, ready to go.

My recommended games list for the PlayStation 3 has Sega’s strategy game Valkyria Chronicles at the very top. It’s a unique and beautiful game that I feel new system owners will really appreciate. While the shooter and racing blockbusters are the obvious choices for recommendations, I feel I’m doing gamers a great service by recommending this title instead. Besides, too many people missed this sleeper, and I am trying to push up the numbers so that Sega doesn’t leave us in the cold when the next franchise game comes down the line.

The game’s sequel, Valkyria Chronicles II, is now at the top of my recommended games list for the PSP. Read our review to find out why.

Valkyria Chronicles II picks up right where the first game left off. Kind of. You play as Avan Hardins, a super-enthusiastic guy (we’re talking crazy gung-ho here) and a new freshman at the Lanseal Royal Military Academy. But while his enthusiasm is appreciated, it doesn’t get Avan very far in the academy’s entrance exams, and he finds himself in Class G, the “loser” class of Lanseal. This sets up the classic underdog school class story that Japan loves to use so much in their games, television shows and stories. As goes the story, Avan works to take the less-than-enthusiastic Class G and shape them up to be real heroes. Beyond this, Avan works to find out what happened to his brother, who was supposedly killed in the war before he enrolled.

Avan’s enrollment takes place about two years after the events of the first game. While peace has not yet returned to Gallia, the enemy was pushed back, and the country has begun to relax a bit. But now a new threat approaches with a pending civil war, which is being fought over the duchess of Gallia being revealed as a Darcsen — an unloved race of people. The resistance wants the Darcsen to be pushed out of the country. Avan and Class G find themselves caught in the middle. 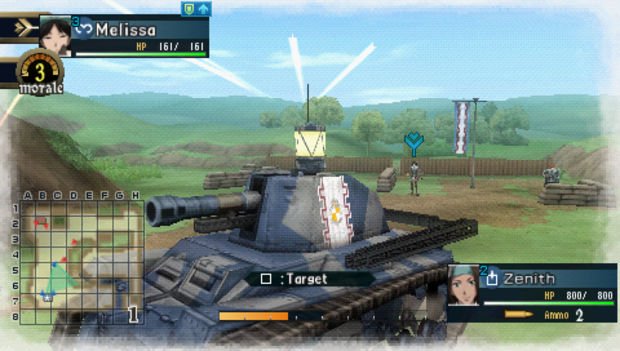 At the heart of Valkyria Chronicles II is the same strategy game play that made the original PS3 title so great. If you missed it, this innovative adaptation of SRPG play lets you move your troops in a third-person view, in real time. You’ll still use an overhead map to make decisions and carry out many orders, but you’ll jump into that lovely third-person view when you take control of each individual troop member. In this view you’ll position, take cover, and even aim and fire weapons. This formula beautifully mixes strategy and action, and this manages to greatly increase the draw of standard strategy role-playing game play.

While the strategy starts out as simple as moving, taking cover, and firing, it slowly escalates into a fairly complex list of variables to keep mindful of. It seems that each of the game’s key battles adds a new aspect to your strategy playbook, but it also adds new enemy powers and complications at the same time. This makes for a game that has an addicting level of challenge that never overwhelms, but slowly builds up in you, making you shake your fist at the sky with fire in your eyes, as Avan often does in the game.

In perfect complement to the gradually escalating challenge is the steady story progression and character development. You’re never bored at Lanseal Academy as there are always new students (and new troops), student drama, and story bits. In between battles you’ll have the ability to freely pop around campus, chatting with classmates and visiting locales. These actions slowly unlock more bits of the story, and you’re free to trigger them at any time, though some scenes are required to progress to the next key battle. Most of these interactions are presented with nicely animated character portraits, some coming with full voice over work. Most are text based, though, and are only occasionally accented with a fun one-liner. Other key events unfold via top-notch anime cutscenes. Both do a fine job of fleshing out the feeling of campus life, and all are voiced very nicely. Overall, you’ll find that this sequel is a bit more lighthearted than its predecessor, but I found that this fits the portable format of the game a bit more. 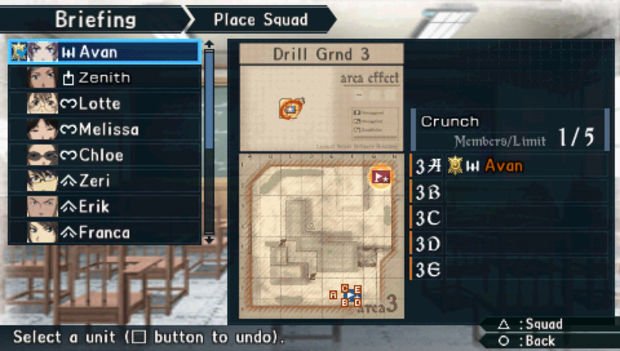 Those that played the first game will be showered with guest appearances in this sequel. While the feel is a bit different when it comes to the overall story, you’ll feel right at home with all the old faces you’ll run into. That being said, new players should feel free to jump right in, as no prior knowledge is required to enjoy Valkyria Chronicles II.

I’ve been asked several times about the challenge level of this sequel already. Let’s just say that the game provides a stiff challenge. It’s not snap-your-PSP-in-half hard, but the later key battles will really test your strategies. Overall I’d say that the game is a tad bit less difficult, but maybe requires more out of you as far as pre-battle strategy is concerned. Believe it or not, there’s more troop leveling and customization options in this sequel, which requires you to really think about how you’ll level and improve your people and gear before you go into battle. To ensure a win, you’ll need to spend ample time tending to your troops, gear and vehicles. It’s only when you get a feel for how deep the battle system is that you appreciate that this may even be a bigger game than the PS3 predecessor. Oh, and there’s an Easy Mode. You could always go that route. Know that you’ll take no story hit for the choice. 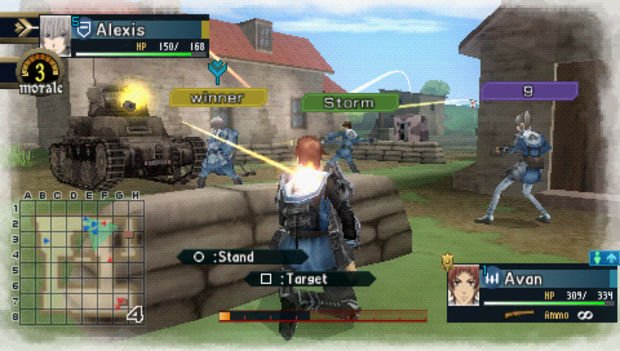 Gone is the watercolor painting look from the battlefield. It’s still there in all the cutscenes, animations and character art, but it’s just a shadow of what it used to be on the actual battlefield. That’s not to say that the battle scenes aren’t nice; they really are. It’s just that the PS3 game was so lovely that it left you wanting more of its unique look. The replacement here is nice, soft and pleasing to the eyes, but it’s not quite what series fans are used to. The rest of the presentation for Valkyria Chronicles II is fantastic. The character art and design is of a very high standard, the voice work is brilliant, and the music is some of the best that has ever graced the PSP’s speakers. The game is perfectly polished, and that’s apparent in everything from the multitude of options settings to the refined autosave functionality that avoids the stock PSP save menus. This is a portable game with console production values.

Valkyria Chronicles II is one of those so-good-you’ll-lose-all-track-of-time games. It’s a big, shiny, AAA-class game in a tiny little package, and despite its small size it still does a fair bit of justice to the franchise name. A new story, battle improvements, new troops, and a ton of missions are exactly what Valkyria Chronicles fans were asking for. And while they may have not asked for it in a portable package, I don’t think they’ll mind too much. The good news is that you won’t feel that there were any compromises made to make this sequel a PSP game. This is the real deal, folks. Don’t miss this game.